Cold and crisp overnight, the temperature definitely dropped below freezing: both my water bag (for filtering water) and the hose for my pack bladder had ice in them. Sunny, with no clouds, it quickly warmed up — at least, where there was no shade.

From the pavilion, the trail climbed up through the forest on the side of a hill, crossed the Hopwell Lake Campground, and continued on through the forest. With the sun still low, much of the grass was still in shade, leaving lots of frost on everything. 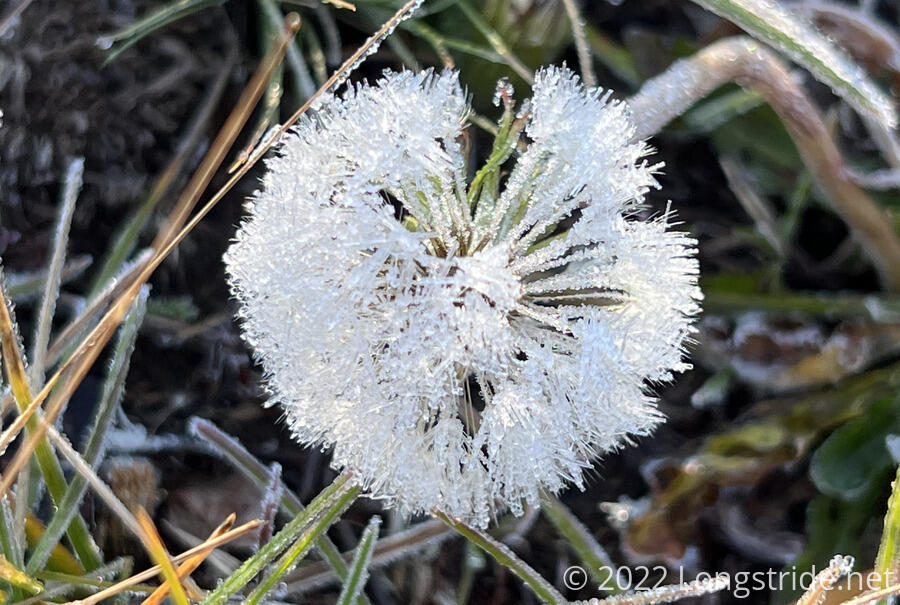 The trail meandered through the woods, occasionally crossing a network of dirt roads through the forest and meadows. Every so often, I’d see a truck or RV parked near the roads; I assumed it was just people out for late-season camping.

Although I was still at 10,000 feet, as I gradually got further from the San Juans, the forests seem to slowly be thinning, the land seems to be getting flatter, with more open areas for cattle grazing, and the mountains seem to be getting rounder — at least, when I can see them. It doesn’t feel like desert yet, but the land is slowly changing towards it. 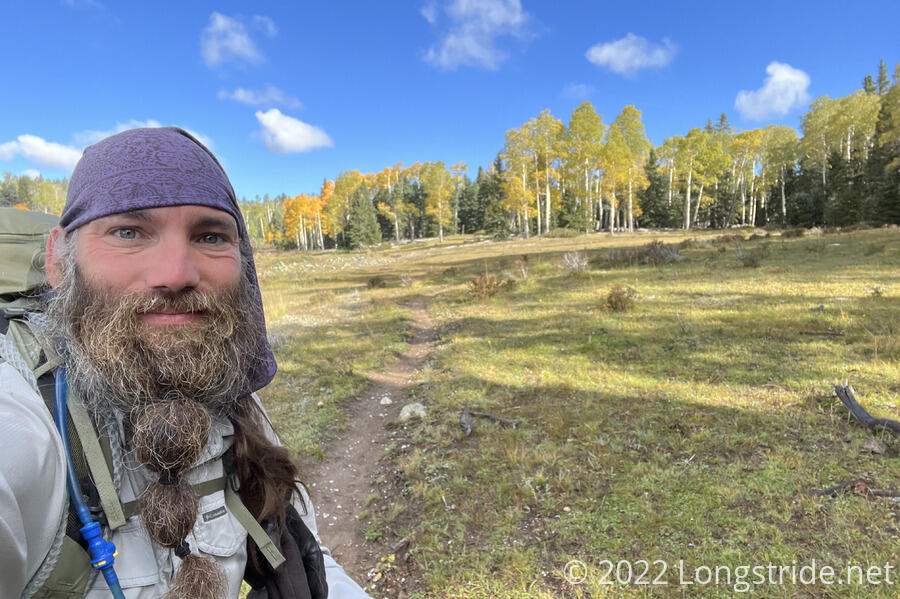 I took a break in a clearing on the side of a hill that dropped into a valley. This was one of the more scenic places I’ve stopped for a break since I’ve been back in New Mexico. 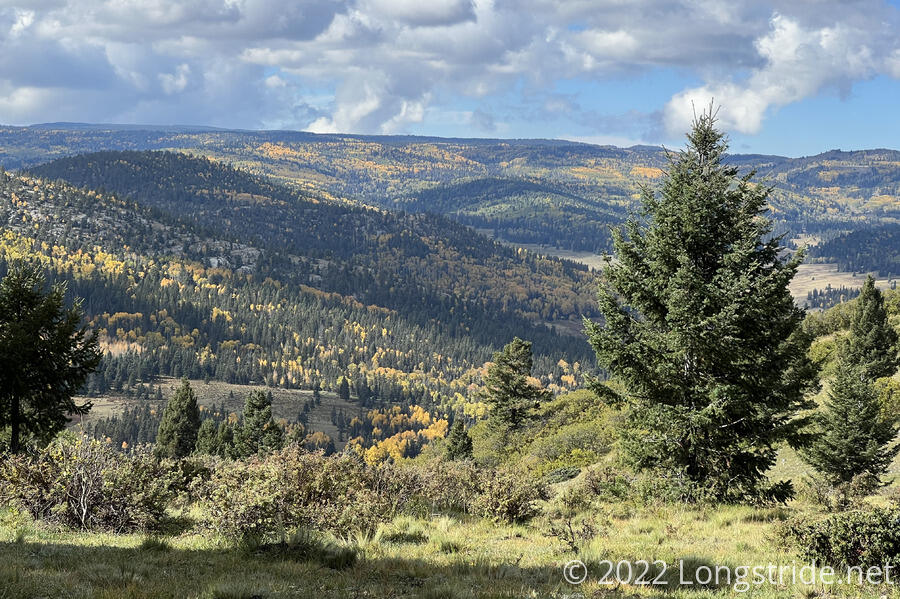 Dropping down towards the valley, the trail closely paralleled, and then crossed, one of the dirt roads it’s been roughly paralleling since I left the campground this morning. I could probably have just taken the road, and it might have been a little faster, but after all the roadwalk in Wyoming and Montana (and plenty of roadwalk still to come in New Mexico), I was happy to just stick to the trail.

After some more winding down a rocky creek drainage, the trail brought me to Rio Vallecitos, the largest river I’ve crossed on trail since returning to New Mexico. I had to ford the river; it was too deep to make it across dry, and two log crossings, one upstream and one downstream, both looked incredibly sketchy.

The other side of the creek had a nice flat area that would make for great camping, but, of course, it was far too early in the day for that. Going uphill past the creek, I passed through a couple of meadows, and the trail turned to the west. After heading generally southeast from Cumbres Pass, the trail would now be heading southwest the rest of the way to Grants.

After the trail turned west, the forest began to actually feel different, with the mix of trees more noticeably starting the transition from Colorado-like forest to something more resembling the forests of southern New Mexico. Three times, the trail, apparently recently rerouted, diverged from the line on my maps. 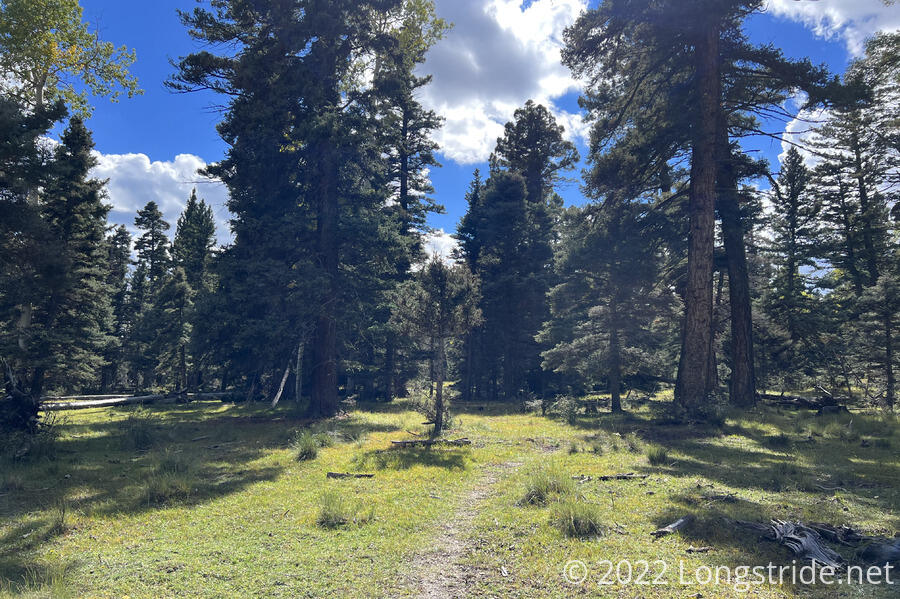 During a bit of a thinning of the forest, the trail joined a dirt road, and I caught up with Wonder Woman, who’d taken some other route along the network of roads today. Along the road were an assortment of trucks, RVs, and large tents; Wonder Woman asked one of the groups what was up; it turns out that hunting season starts tomorrow, and the hunters were all out getting ready. (The weekend starts tomorrow, go figure.)

We hiked together for about an hour, until she stopped to take a break.

The trail easily crossed the small Canjilon Creek, though it was a bit hard to make the trail out through the grasses. A marsh on the creek’s far side left me with two soggy shoes, despite my best efforts to not step in water. (The trail, with overgrown grasses, of course effectively didn’t exist until I’d climbed up the hill far enough away from the marsh.) This kind of put a damper on the late afternoon; wet feet were the last thing I needed if it was going to be cold out again.

Going through a burn scar, the trail arrived at a pit toilet and trash cans adjacent to an old paved road. The ground (and particularly, the road) looked a bit moist; probably, it had rained recently, and I was lucky enough to have missed it. Nearby sat a small picnic area with concrete picnic tables and benches. It wasn’t glamorous, but it was usable. After looking around a bit to find a decent spot to set up my tent, I settled on the least bad place I could find, trying to get my tent set up as quickly as possible. The sun had already dipped behind the mountains, it was getting cold, and clouds were coming in from the east. 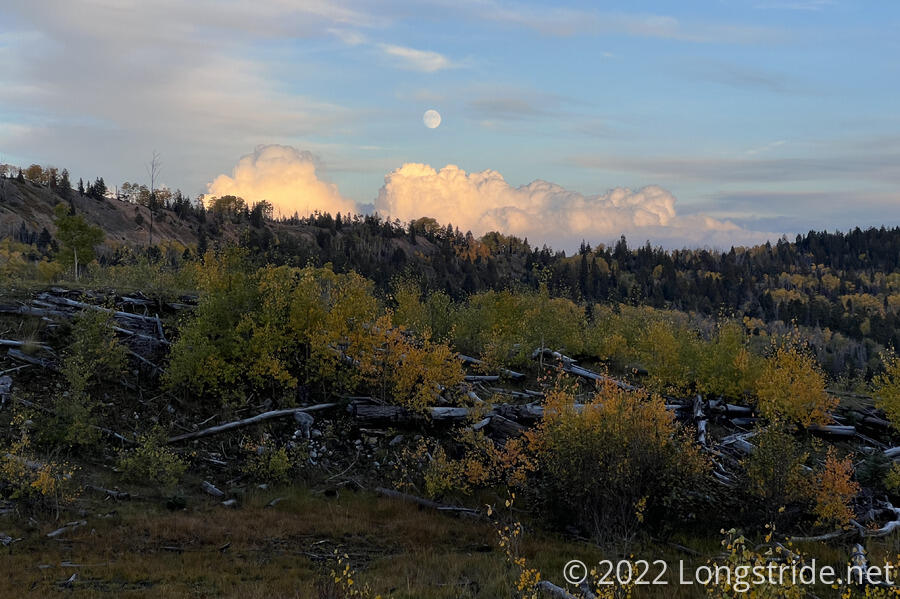 Clouds form over a nearby ridge.

Wonder Woman arrived a little after me, and set up nearby. Snow and Mango passed by after it was already dark, apparently deciding to go a little further.

With the sun setting increasingly early now (it was before 6:45 pm today), cooking dinner before sunset wasn’t going to happen — and is increasingly unlikely to happen for the rest of the hike. By 8, the sky had clouded over and it was very cold out. I’d finished the first half of dinner, and decided not to cook my course of ramen.

A light rain started to fall just before I got into my tent; I was glad I decided to skip the latter half of dinner, or I’d have been rushing to finish and pack everything up from dinner. Occasional flashes of lighting (but no thunder) filled the night sky. Given how cold it was yesterday, I’m worried it might snow overnight.