Quite unexpectedly, I got to slackpack today, and stay at a hostel, and reunite with three friends I hadn’t seen since New Mexico.

I decided not to zero in Salida. I loosened the shoelaces on the boot that was hurting, and would test that out on the next section. Worst case, I’d be able to bail out before I got too far.

My preference for sending my resupply to Twin Lakes would’ve been USPS, but the Twin Lakes General Store, where I needed to send the box to, recommended a three week lead time for the Postal Service because of local delays caused by the post office being short staffed. With only half a week lead time, that meant either UPS or FedEx. So I found a shipping store on the highway on the edge of town.

Since I was hungry, and Mo Burrito was on the way to the store, I decided to go there for a late breakfast. On the way there, ahead of me in the sky, I could see not a rainbow, but a “rain stripe”; a straight horizontal band of colors filled part of the sky.

After leaving the restaurant, I walked down the road towards the highway, and the shipping store. I passed a white van decorated with asterisks. It seemed a little odd, but people decorate their vehicles and all manner of ways, and who am I to judge?

A few minutes later, the van drove up to me, and the woman driving asked if I needed a lift. I said yes. She drove me down the road to the store, which saved me five or ten minutes of walking. I hoped she’d also have been able to give me a ride up to Monarch Pass, but she had something else she needed to do and that would’ve taken too long.

I got my food boxed up and ready to be sent off to Twin Lakes, and then went out to the road in front of the store to try and hitch back to Monarch Pass. After about ten minutes, a car pulled into the parking lot and offered me a ride up to the trail head.

Back at Monarch Pass, I went back into the store to use the restroom. While I was there, I ran into Shane, who owns The Butterfly House, a hostel a few miles down the road. He offered that, if I gave him my pack, he could take it to the Butterfly House, and I would be able to slackpack the 11 trail miles between the pass and the road that goes from a trailhead back towards the hostel. (The hostel is about two miles off-trail; downhill, which is great for today, but not so great for tomorrow.)

Not being one to refuse a slackpacking opportunity, I pulled the water bladder pouch out of my pack (it doubles as a small day pack), added in some snacks, carried my pack to Shane’s van, and set off down the trail, much faster than usual. 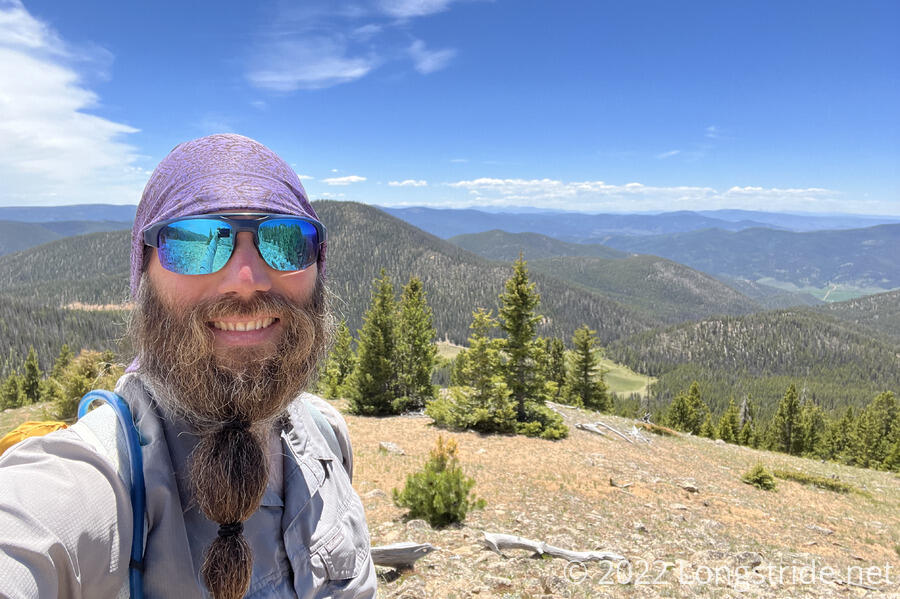 After crossing the highway, the trail started off going through ski area, on dirt access roads. The roads were well-maintained, and I made pretty good time for this section. At one place, I even managed to run down a hill, which I never would have attempted with a full pack; the added bulk and weight would have made my back and knees very unhappy.

Mostly through the ski area, the trail turned off the dirt road and onto a fairly nice trail. Filled with the energy of just having come from town, plus only carrying five pounds on my back rather than forty, I continued to speed down the trail.

Most of the trail today was above the treeline, with the ground covered mostly with rocks or short grasses.

In the distance, I spotted a hiker that appeared to have pink pants. My initial reaction was, “That can’t possibly be Mr. Freeze!”, since I’d expected her and the rest of the group to have been days ahead of me.

It was indeed Mr. Freeze. It turned out that they had all zeroed in Salida to go white-water rafting. (We’d discussed this back in Pagosa Springs, and I’d forgotten about it since I wasn’t terribly interested in doing it.) Then, they wound up having to zero an extra day yesterday, since the post office was closed for Juneteenth, which was new this year, and no one was expecting that.

Normally, Mr. Freeze is pretty fast and lead the pack, but today, she was going slower due to something she ate. We chatted for a bit, but then I pushed on.

The main climb of the day was towards Bald Mountain, which true to its name, had very little vegetation. Not that I wanted a steep climb, but I was slightly disappointed that I was doing a slackpack through mostly “easy” trail, with only limited benefit (excepting the general ease of hiking with a lighter pack).

I next passed the K2s (Kite; and Kiernan, now Kickback), catching up to them by practically running down a hill. A bit later, I passed Patches while he was taking a break on the side of Bald Mountain, near the trail’s high point for the day. 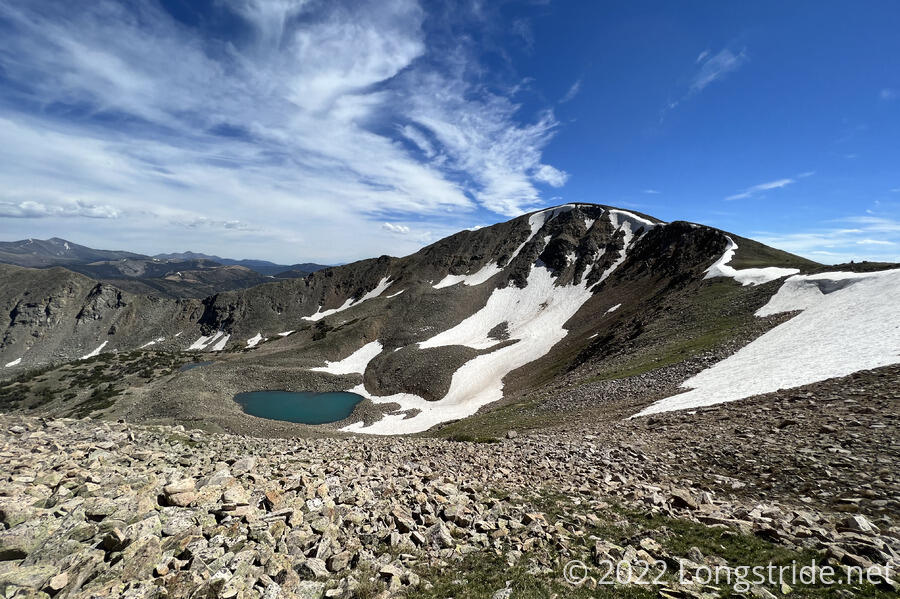 I was initially disappointment at the trail’s lack of difficulty; since I was slackpacking, I wanted there to be terrain that was worthwhile to slack over. This disappointment was unjustified; shortly after I passed the K2s, the trail became significantly rocky, and the light pack made it much easier to handle the uneven terrain. (My knees also appreciated the lack of weight while they were navigating rock.) Then, the trail was both rocky and somewhat steep dropping down the other side of Bald Mountain, and this section went much faster than it otherwise would have.

This area sort-of reminded me of the Desolation Wilderness on the Pacific Crest and Tahoe Rim Trails, in that there were a number of lakes, the trail was visible from a distance, and it was rocky and rugged. It’s not really a great comparison; the back side of Bald Mountain has far more vegetation than Desolation did. (Frankly, Colorado so far has had far more vegetation than pretty much anywhere in the Sierra, despite generally being higher in elevation.)

I passed Boss admiring one of the lakes below Bald Mountain, and continued on through more forested trail. I joked with Boss that there was a lake ahead with his name on it (Boss Lake); he said that was where they were planning on camping tonight. (In all likelihood, this will put them at least several hours ahead of me tomorrow, since I’ll be “in town”, and also two miles off trail.)

Once back under tree cover, there were a few snow patches that had not yet finished melting. Half a dozen of them crossed the trail, but they were all small enough to either step over or easily go around. My ice axe and microspikes are starting to feel more and more useless, but there have been reports of more snow ahead, which is why I opted to keep them around at least until I get to Breckenridge. 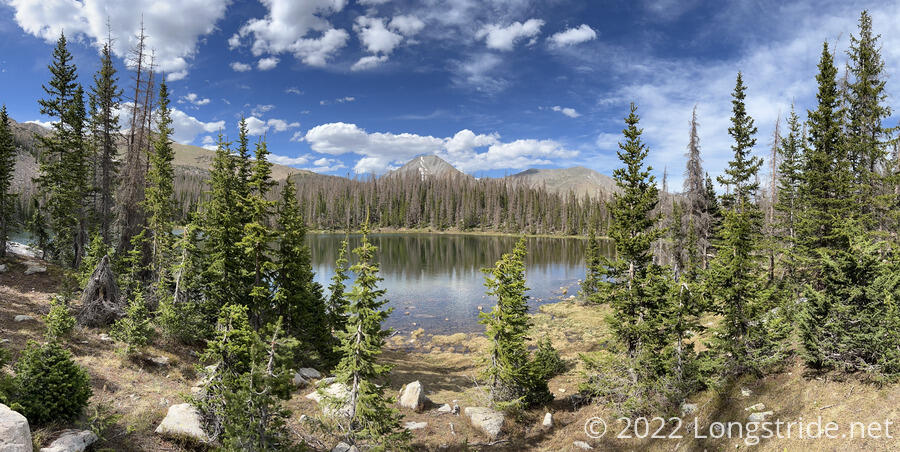 Running along a cliff above Boss Lake, the trail went past an old mine shaft. I peeked in; it smelled bad, and there was still a huge chunk of snow at the bottom, shaded from the sun.

Boss Lake itself is man-made (or at least, man-augmented); I suspect it was used for whatever mining operations took place here.

On the berm keeping in Boss Lake, I ran into Ducky, and also Duskman and Piper, whom I last saw the first day out of Pagosa Springs.

A little further ahead brought me to a parking area for Boss Lake, along a rough dirt road. I turned off the CDT and followed the road, eventually turning off the road and onto a snowmobile path that lead to the back entrance to the Butterfly House. On the way there, a few small but well-placed signs helped make it clear which way to go at intersections.

When I met Shane at Monarch Pass, I inquired about Pale Ale, Sprouts, and Stumblebee, since I knew they had to be somewhere vaguely in the area, and had seen a post from one of them that suggested they had been at the Butterfly House. He said that all three were there now. Surprised, I asked him to let them know I was on my way there. I hadn’t seen them since we were all in Grants, a month ago.

When I arrived at the Butterfly House, they (but mostly, Stumblebee) were in the process of making pancakes for dinner. (There were a variety, containing apples, cheese, or bacon.) Over dinner, and into the evening, we got caught up on our respective adventures over the last month.