Today’s trek west took me over the last mountain over 12,000 feet on the trail, as the trail continues its slow decrease in elevation on the way out of Colorado.

With a plan to hike 25 miles today, I managed to get up before 6 am this morning, and started hiking before 7:30. As I expected yesterday, it was extremely damp and humid overnight, and both my tent and sleeping bag were quite wet. Being deep in a valley, the sun didn’t rise over the ridge until I’d started to take my tent down, and so everything was quite wet when I packed it away.

I continued downhill, following Trout Creek in its very narrow valley. The flattish valley bottom, which held the creek and the trail, was maybe only 200 feet wide at the most, with the sides rising very steeply beyond that. The trail itself was a narrow rut dug into the ground, and the humidity overnight meant all the plants were wet. It wasn’t a terribly fun way to start the day. 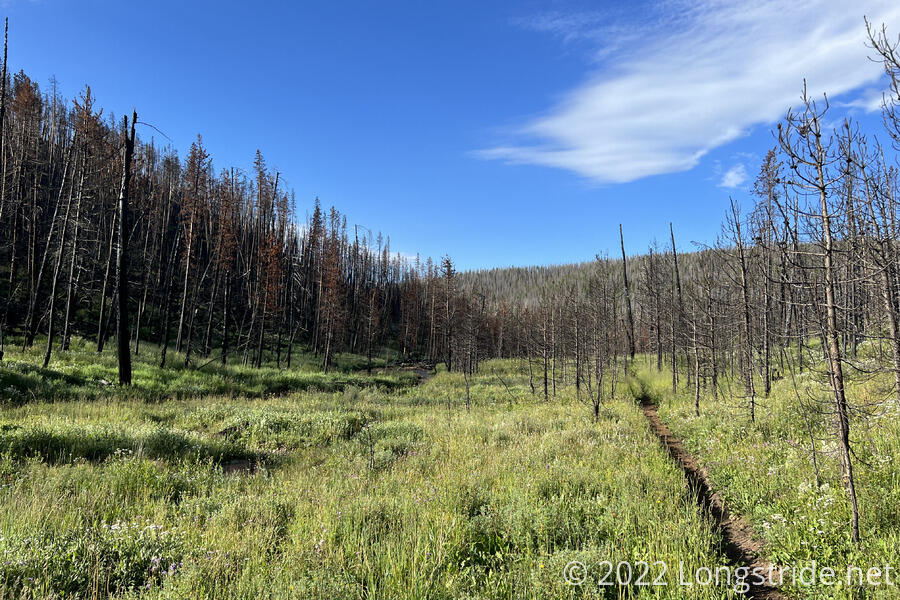 Eventually, the trail turned away from Trout Creek and began climbing up another valley. Still in the area burned by the East Troublesome Fire, there was a fairly significant amount of erosion, and the trail at times was a deep gorge in the dirt. The loss of live plants near the trail likely contributed to the erosion, with the trail being an easy channel for water; tire tracks from bikes suggested this was also a popular mountain biking route, and that didn’t help the trail tread either. 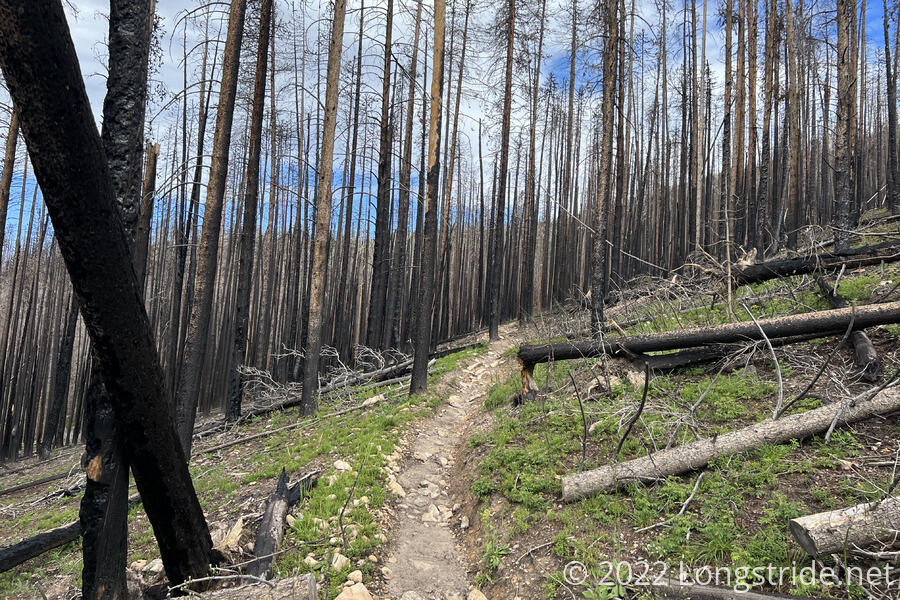 Burned Mountainside — The trail travels through area burned by the 2020 East Troublesome Fire.

The main climb of the day was up to Parkview Mountain. At 12,296 feet, it is the last time the trail will be above 12,000 feet. Gaining four thousand feet of elevation in nine miles (and most of that in the last four miles), this wasn’t going to be an easy climb. Between the lack of shade, the clouds not particularly cooperating, and the roughness of the trail, it felt slow-going. I may be on my way out of Colorado, and the trail might be slowly losing elevation, but it certainly hasn’t gotten any easier yet. 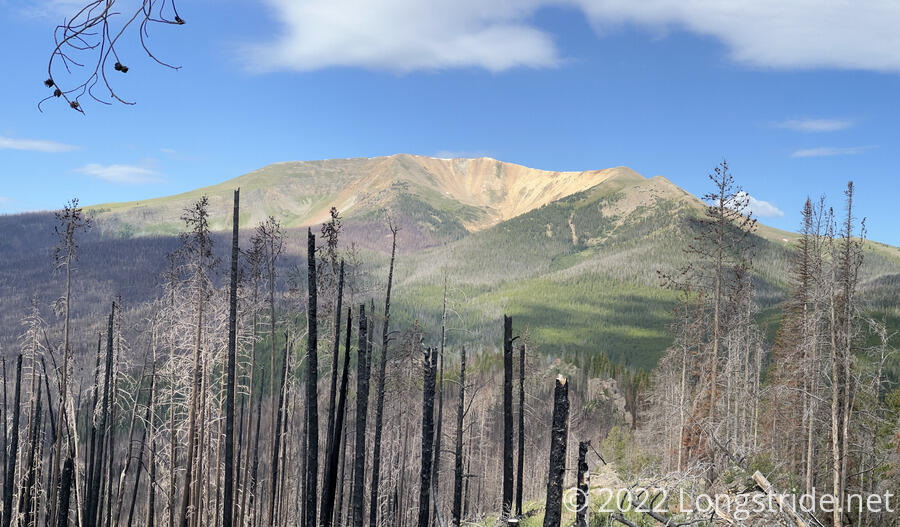 Just after crossing a road, and just before the trail began its steep ascent of Parkview Mountain, I stopped for a break. This part of the forest had escaped the fire, and I was able to take advantage of a nice cool shade. 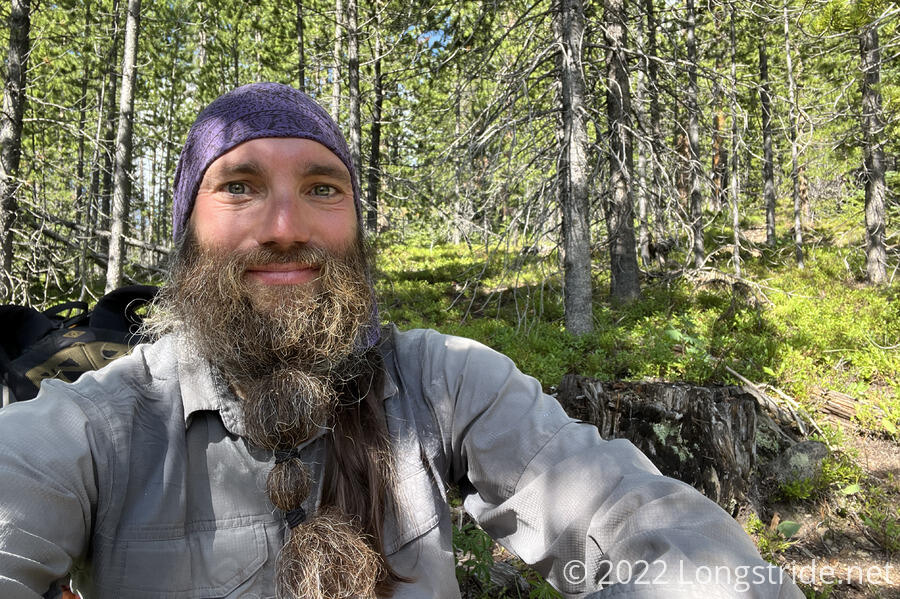 The trail continued uphill, mostly along a forested ridge, eventually diverging to the side of the mountain so as not to have an unreasonably steep ascent. Climbing above the treeline, the trail became a bit rocky, and some biting flies came out of nowhere. 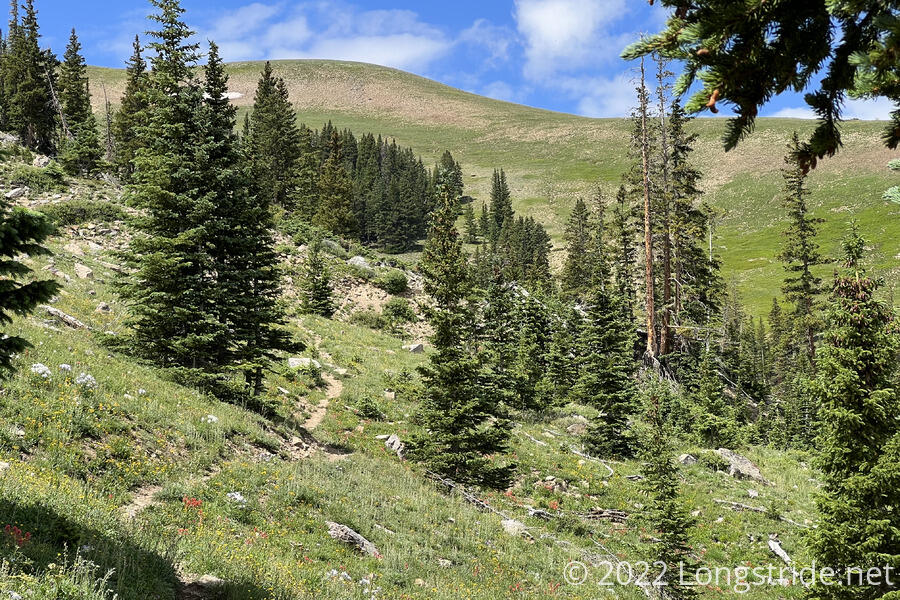 I passed two southbound section hikers; I expect I’ll probably start running into southbound thru-hikers in the next week or two.

Climbing back up onto a ridge, I had expansive views in all directions. The summit was still over a mile away, with switchbacks on the ridge clearly visible.

Approaching the summit, the mountain got rockier as the vegetation dwindled. The trail followed a narrow ridge up to a lookout cabin on the summit. I was looking forward to a break in the cabin; the wind was starting to pick up, and clouds were starting to cover the sun, making it quite a bit cooler. 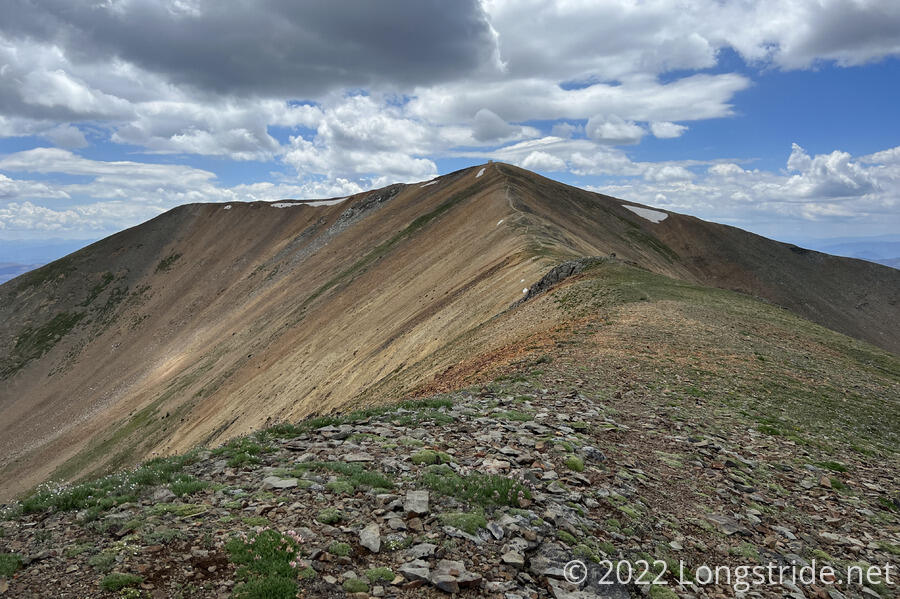 Parkview Mountain — The trail follows the narrow ridge, leading to a small lookout at the summit.

The lookout cabin on the summit, seemed to be the remains of a larger fire tower structure. The front door was unusually short, so it was actually rather difficult to get in, and I had to take my pack off. The inside was nice, but cramped, and I opted to take a break outside, rather than inside, because I didn’t want to fight with my pack to bring it in. The sun had come back out anyway, so it wasn’t as cold as it was on the final part of the climb to the top.

From the summit, a clear trail lead down a ridge to the southeast, which would be easy to mistake for the CDT. But, the CDT followed a faint trail heading west down a different ridge. So faint, actually, that I couldn’t easily see it from the summit, and I had to just start heading in roughly the right direction until I crossed it.

For the next mile, the trail followed a steep ridge downhill, occasionally becoming faint and indistinct, the trail hidden by grasses and wildflowers.

Easily visible from Parkview Mountain and the ridge I followed afterwards was Haystack Mountain, which stood prominently among a jumble of hills and valleys. 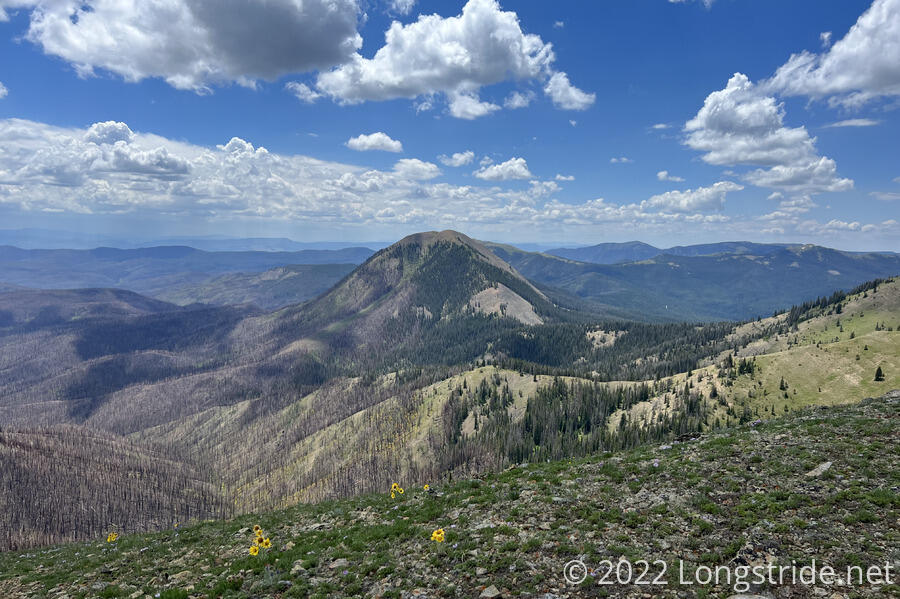 The ridge brought me over an unnamed mountain (“Peak 11480”) and then back down, becoming so indistinct that I wound up missing what had to have been a switchback, and just hiked straight down the ridge to where I could see the trail ahead. Several more switchbacks helped blunt the steepness of the descent, and I finally dropped below the treeline again. Reaching a saddle, the trail turned to go around the south side of Haystack Mountain, crossing through the East Troublesome burn area for the last time. I was actually able to see footprints in the dirt and ash on the ground; it looked as though there were two distinct groups of footprints from other northbound hikers.

I stopped for a break at a creek, having just passed two more southbound hikers who’d just set up camp. By this point, it was 4:30 pm, and I’d only gone just over 16 miles. Tired, I decided I wasn’t going to be able to make it another nine miles to a campsite near a creek that I’d planned on. Instead, I decided to fill up on water at the creek and only go another couple of miles to a large campsite on a ridge. I easily got enough water to cook dinner tonight, but I didn’t put anything into the water bladder in my pack; I didn’t want to carry any more weight than I had to since I was tired, and I thought it had more water than it did. Which meant I ran out of water in my pack bladder about a third of the way up the hill to my campsite.

On the way to my campsite, on Poison Ridge, I crossed through Troublesome Pass, which lent its name to the fire from two years ago. The campsite was much nicer than yesterday’s, located in a large flattish area amongst the trees. On top of the ridge, far removed from any source of water, it was dry, and my tent and sleeping bag dried out fairly quickly once I set them up.

After I finished dinner and retreated to my tent, the mosquitoes showed up, and decided the tent doors were a good place to hang out. They stayed until the the wind picked up and it rained a bit.

I was a bit disappointed in only hiking 18 miles today; I suspect that a combination of too much sun and not enough water exhausted me, which doesn’t bode well for tomorrow, which will need to be a long day to set up for getting in to Steamboat Springs the day after.

Continental Divide Trail, 2022
« (Day 75: If Only The Rain Would Make Up Its Mind) Previous Entry
Next Entry (Day 77: The Last Roadwalk of Colorado) »