With yet another marathon along dirt roads, I continued my charge through the Great Divide Basin.

I had a 5 am alarm set, and I actually managed to get up before my alarm went off. Aided by it being warm and dry, I started hiking fifteen minutes before sunrise!

It should be no surprise that the day started off with more dirt roadwalk, continuing my northwestward trek. Since I left Rawlins, the trail has been relatively consistently aimed northwest, and it’ll be like that until I leave Wyoming and turn west along the Idaho-Montana border.

In the distance, in front of a small mountain, there was a dirt road with relatively high traffic levels. In the roughly 20-25 minutes that passed while it was visible, at least three trucks passed. After that, the trail wandered around a bit on various dirt roads, eventually finding a valley (filled with cows) that it climbed.

After about six miles, I reached Brenton Springs, a fenced-in area with a small spring, and I stopped there to get water and take a break. One of the most rickety wooden ladders I’ve ever seen provided access over the fence. 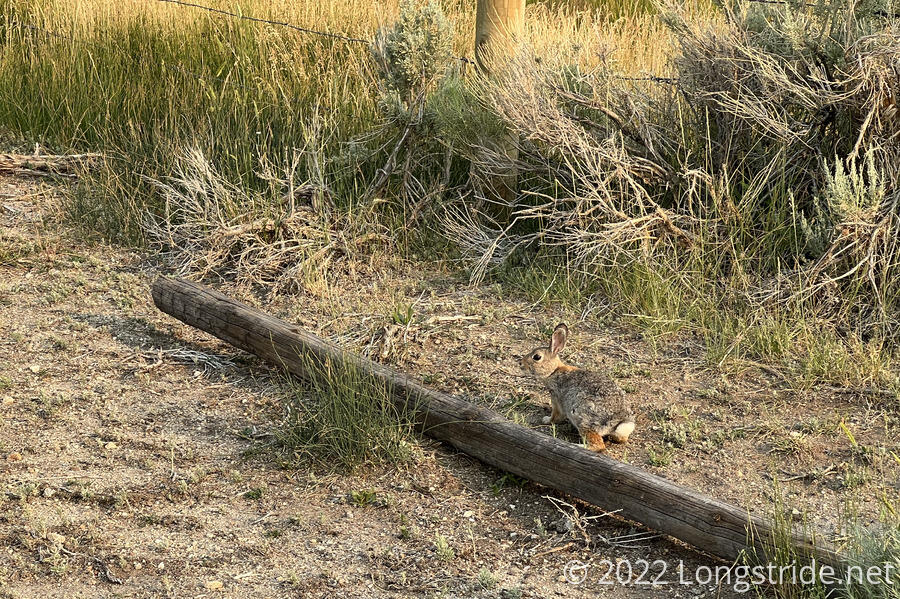 The trail continued up the valley, eventually turning once it reached a pass and began following the top of a ridge further uphill. With a light breeze and a thin layer of clouds over the sun, I had hopes that the weather today would be nice. However, by 10, it was clear it was going to be hot out. I’d managed 9 miles by then, which felt a little slow given the early start. But I was sweating rather profusely give it was still before noon, and I had a feeling the rest of the day was going to be slow. 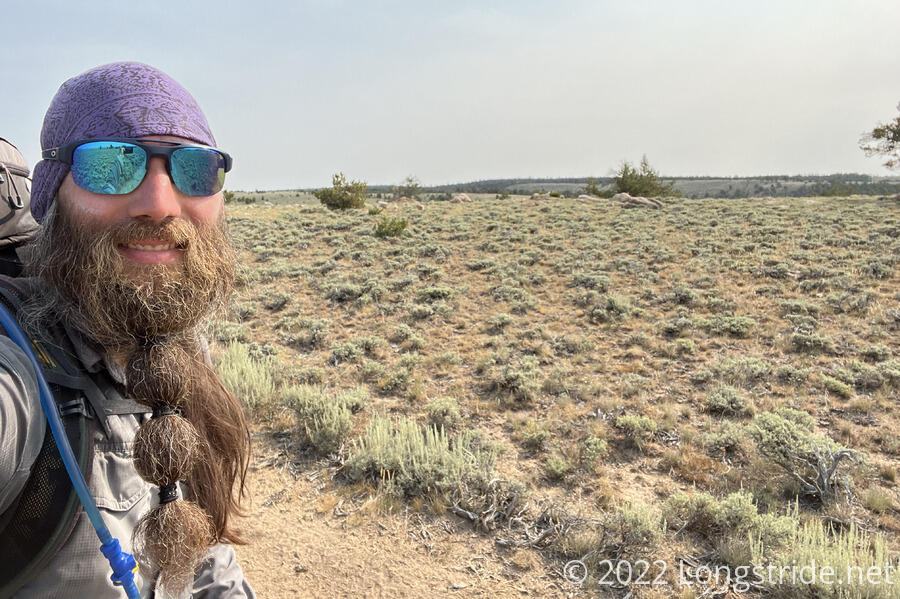 As I was adjusting my pack, the load lifter for my left shoulder strap (which helps pull the pack forward, upward, and off my shoulders, and aids in keeping it from leaning too far back and bouncing around) ripped off. I was able to improvise a workaround by trying the strap to an attachment point on my pack’s brain, which was better than nothing, but it required constant adjustment over the course of the day, and still resulted in a lopsided pack. It does not look like it’s repairable, but as long as the right load lifter doesn’t fail, I think I can manage. I was disappointed, though; this pack only has about 2200 miles on it, and my previous pack lasted well over 5,000 miles before it broke. At least the trail itself is relatively gentle for now, but that’s not going to be the case in a few days once I enter the Wind River Range.

The dirt road the trail followed meandered a bit, into an area with more cows grazing. A group of cows stood at road junction, blocking access. I took a short detour down a dry riverbed and through the sagebrush to avoid them. 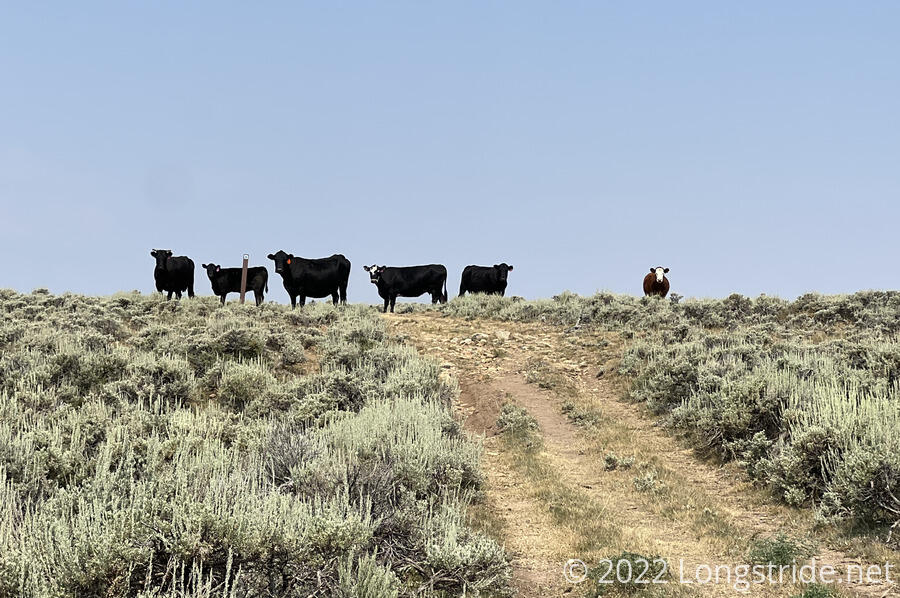 Cows on the Trail

I stopped on the side of the trail after 12 miles (and, before noon, too!) for a snack. About two miles later, after going through a small, dry creek valley (though with more green vegetation) with a few decent areas for camping, I reached a cow pond and stopped to get water. The water didn’t look the greatest — especially with cows on the other end of the pond drinking in the water, but I needed more water. Like last night, there were no trees, so I had to stand and hold the bag up while the water filtered. This was tiring in the hot sun, especially as my filter has gradually gotten slower over the course of the hike. (I should probably look into getting a new one soon so water doesn’t take as long.) 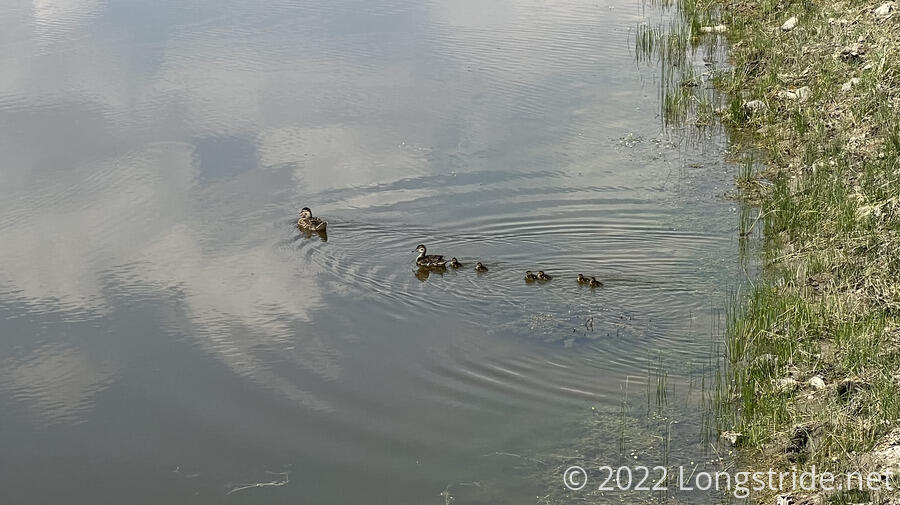 Ducks — Two ducks and their ducklings paddle across a cow pond.

With the sun beating down on me, a few clouds started to blow in from the northwest. I hoped they would cover the sun at some point, since with the overhead sun and rising temperatures, the afternoon was becoming quite miserable.

I continued following a dirt road. Still largely straight, the road was now taking me through a more hilly area, and it curved a bit more to follow the contours of the land. After dozens of miles of monotony, at least the views were now starting to get a little bit more interesting. Cloud cover gradually increased, and after another couple of hours, the trail brought me to the edge of a plateau overlooking lower-lying land to the south. I stopped for a break at a little bit of a local high point.

The road followed the edge of the plateau for a little while, briefly leaving the road to cut a switchback and climb up to another ridge. On the other side of the ridge, I stopped for a break after not even an hour. My feet hurt, and I was feeling fairly low-energy. (Also, thanks to my early start, and listening to podcasts for the entire day, I needed to charge my phone a bit.)

Now late in the afternoon, I pushed on, following the road wherever it led. I passed a little uphill of a cow pond that, even from a couple hundred feet away, looked pretty nasty. I kept going. My trail guide suggested there was a well-stocked water cache about a mile beyond. I hoped there was plenty of water there, because I didn’t want to have to come back and figure out how to get water from the pond.

I got to a small fenced-in trail kiosk flanked on either side with small flat areas for tents. (Well, really, they were places where people had parked cars, but that works too.) There was already a tent set up when I got there — Pecorino had gotten there around 1, and spent the rest of the afternoon in his tent, not feeling so well because of the heat. (He probably had heat exhaustion; his head and shoulders were a bright red.) He said it had gotten into the high 80s today, which sounded about right. Fortunately, though, he said the weather forecast for tomorrow was looking cloudy and rainy. I wasn’t too keen on rain, but some persistent clouds would be nice. He also said that Stumblebee, Sprouts, Bass, and the rest of their group had left about an hour ago, gone to night-hike for a few hours.

In front of the kiosk was a large box with a trail register and easily a dozen gallons of fresh water, truly a sight to behold.

I got my tent up and laid down and relaxed for a little while before cooking dinner. The wind picked up a little, and the cooler air was refreshing.

Today was a hard day. I’d managed a little bit more than a marathon today, which was significantly less distance than I was hoping for. But with the temperature being as high as it was, everything was pretty uncomfortable, especially the (still rather limited) uphills. At least there was some more interesting scenery today than the last two days.

If I can manage 35 miles tomorrow — which is a big if, and only be possible if I get an early start and the weather is nice — I have a chance of making it to a bed-and-breakfast in Atlantic City, a little bit off trail.

This post contains links to amazon.com. As an Amazon Associate, I earn from qualifying purchases.
Continental Divide Trail, 2022
« (Day 88: Straight as an Arrow) Previous Entry
Next Entry (Day 90: I Have Not Died of Dysentery) »