After a series of long days, I took a short day and stop at a B&B in Atlantic City, just a mile off the trail.

With only ten miles planned today, and no alarm set, I was lazy this morning. I slept in, and didn’t get up until after 7 am, long after sunrise.

Unsurprisingly, since I camped in a valley next to a creek, my tent and sleeping bag were wet. This wasn’t really much of a problem at all today; the tent mostly dried out in the sun while I was packing up, and I figured I’d be able to hang up my sleeping bag once I got to town.

I left my campsite around 8:30, and continued along the dirt road, heading towards Atlantic City. Near the creek, the mosquitoes had not improved since last night, but once I got further away, they did as well. 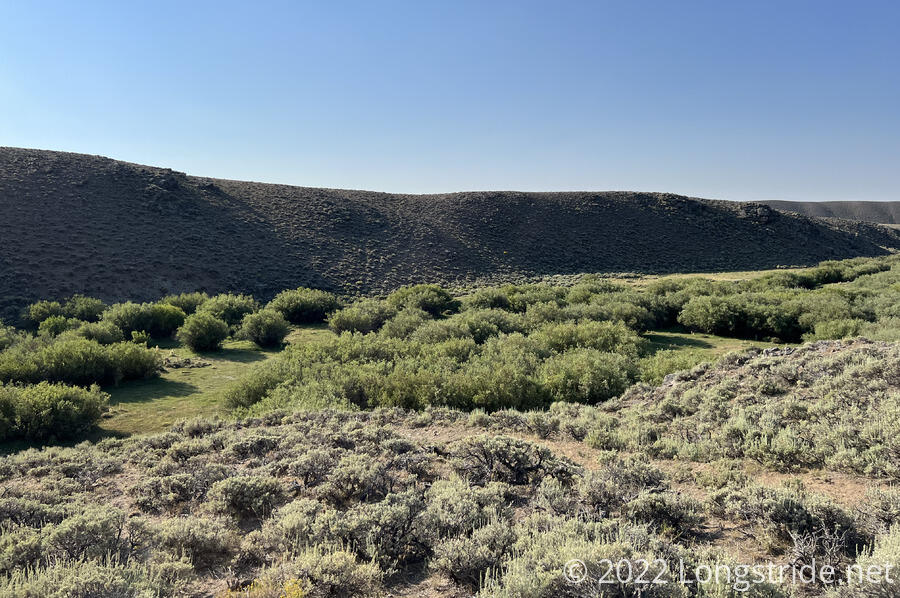 A view down the hill to the area around Rock Creek, where I camped last night.

Yesterday turned out to the the weather exception; today, the sky was largely clear of clouds, but the bright sun was offset a little bit by a cool breeze.

Today, the trail headed northwest, almost directly towards the southernmost mountains in the Wind River Range, which satisfyingly grew as I drew closer. After several days going through sagebrush-covered gently rounding hills, it’s exciting to see something different.

Mountain Ahead! — The southernmost mountains of the Wind River Range provide promise of a changing trail ahead.

On the advice of comments in my trail guide, as much as I dislike roadwalks, I opted to stay on the dirt road I was on, rather than follow the official trail, which disappeared off the road and into the sagebrush. (Stumbling through five miles of sagebrush with an indistinct trail was not appealing.) Taking the road was slightly longer than the trail, but probably much faster.

Along the way, I crossed the Oregon Trail again. Shortly after, a couple in a conversion van drove by, and offered water. 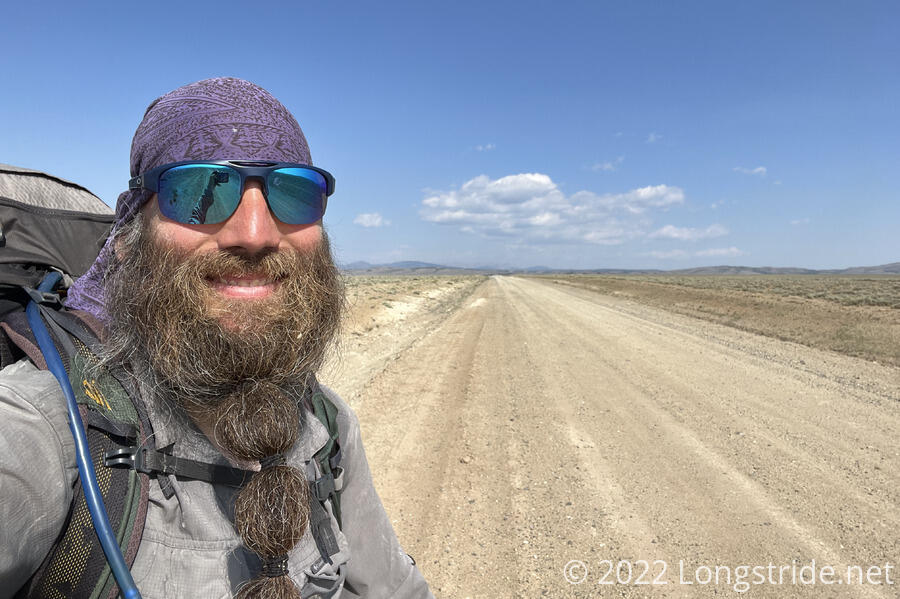 My feet started to tire as I grew closer to the mountains (and town), but loosening my shoelaces a little this morning seemed to have helped considerably. I’ll probably need to loosen them a tiny bit more tomorrow morning when I leave.

The Winds draw close enough to see snow on some of the mountains.

After about nine miles of hiking, I crossed over the CDT and continued on the road into town. Atlantic City is tiny, and feels more like a historical artifact that just happened to stay inhabited long after it should have disappeared into nothingness. 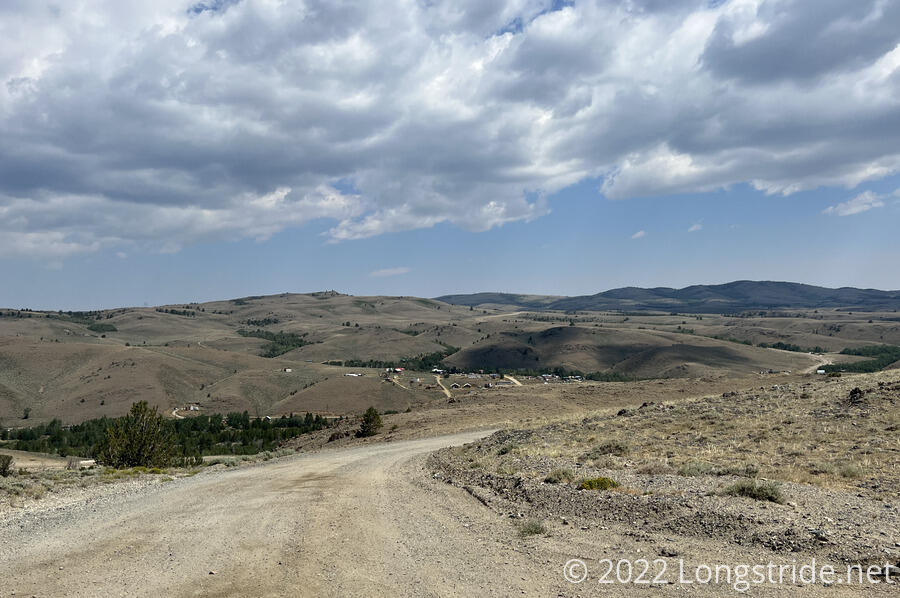 I reached Wild Bill’s B&B about quarter to noon, and was able to get into my room immediately, though with a small bit of confusion: they were expecting someone else. Apparently, Bill forgot to mention I was coming to his wife, Carmela.

My room was a private cabin large enough for a queen bed, a couple of small tables, and a chair. It had no power, but did have a couple of battery-powered LED lanterns. It reminded me a bit of a smaller version of a cabin I stayed at in Maine on the Appalachian Trail, except that cabin had a kerosine lamp that left a sooty residue on everything.

My first order of business was getting a shower, which was great, except there was very little hot water. Then, I tossed my clothes in the laundry, and headed into town to get lunch.

On Bill and Carmela’s recommendation, I went to the Miner’s Grubstake, and had an excellent burger. I wanted to also get an ice cream sundae, but the restaurant was unexpectedly and frantically shutting down because of a power outage for the entire town for some kind of maintenance that was planned, then cancelled, then reinstated with ten minutes notice. (Apparently, the power had been out all day yesterday, and was supposed to be out today, but that was cancelled. And then un-cancelled.)

I returned to my cabin, briefly chatting with another hiker on the way (Captain Buck; AT 2001, PCT 2017-18). With no wifi (and also no way to charge my stuff, at least until later), I took a much-needed nap.

Later, after power had been restored to town, I checked out the restaurants, but they were both still closed. I passed by a small herd of cows standing in the road on the way. I returned to my cabin, prepared to have a “dinner” of snacks. (I didn’t want to cook food tonight, since that would reduce my flexibility for the next section, which is a long one.) Carmela noticed, and sent me across the street to the Miners Delight Inn, also owned by Bill and Carmela, to get pizza.

They were cooking pizzas for the guests at Miners Delight, so I got to join them; the guests were motorcyclists, and also a hiker, Baby Hulk, who has been doing 30 mile days regularly to get as far as she can before she has to return home the first week of September.

Returning to the B&B, I sat on the porch while I finished charging my phone and battery, and chatted with a cyclist, Colin, for a bit, notably about the incredible amount of cow shit there is everywhere in the basin, and whether ranchers should even be allowed to use public lands for private gain. During our chat, Bill briefly interrupted to let us know that he’d put up and turned on the electric fence to keep the cows off the property. Later, the herd of cows marched down the street in front of the B&B.

Tomorrow: breakfast, and then I head out on the next section. After passing through South Pass City, I’ll make my way through the famed Wind River Range.