Today, we completed the first section of the GR131 on Fuerteventura, hiking from La Oliva to Corralejo.

Last night after a long tiring evening of chores, when we were revising our hiking plans for Fuerteventura, we decided to hike today’s section “backwards”, so that we could enter into relax-mode as quickly as possible once we were finished hiking today. This meant taking a bus out to La Oliva, and hiking back, which meant we wouldn’t have to wait for a bus to show up when we were done hiking, and we could immediately relax.

We arrived at La Oliva’s bus station at 8:30, and began our hike north, back to Corralejo. Across from the bus station is a church, and we got to see them getting their very large Christmas tree sculpture removed on a truck.

After leaving town (and two barking dogs chained up next to the road), we passed a pair of windmills sitting atop a ridge. 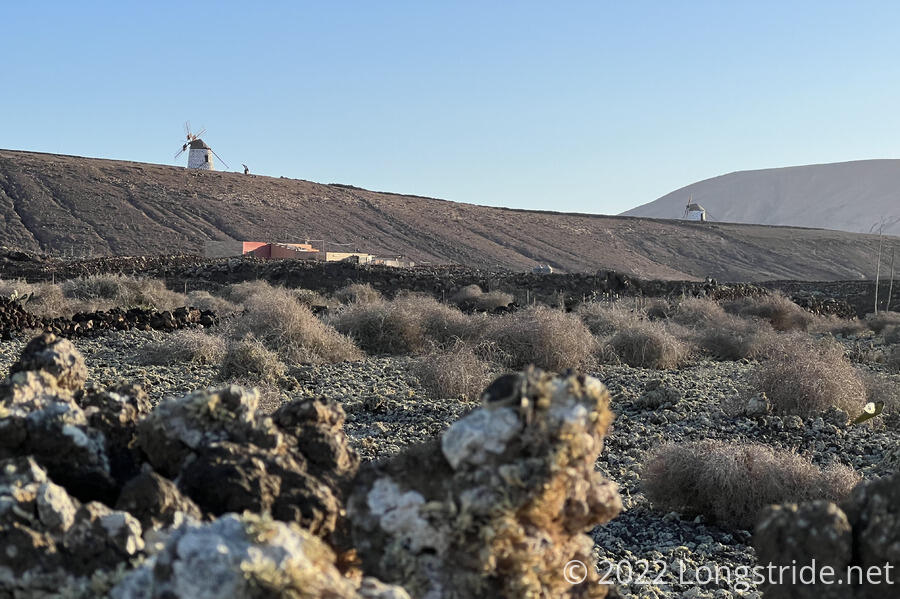 Shortly after, we entered a protected natural area, the Malpaís de La Arena, roughly, the Volcanic Badlands of the Sand.

We also passed our first shelter on the trail, a semicircular stone wall about eight feet high, with a straw roof and a pair of benches.

After a wrong turn at the shelter (we headed east, across the mountain following a dirt road, instead of taking a rocky path down the mountain next to a blocked-off dirt road also going down the mountain), we passed a pair of British day-hikers out with their dogs; the “friendly” dog not on a leash jumped up on CareFree’s leg before its owner pulled it away.

As if for consolation, the trail gave us part of a rainbow, out in the ocean between Fuerteventura and Lanzarote. 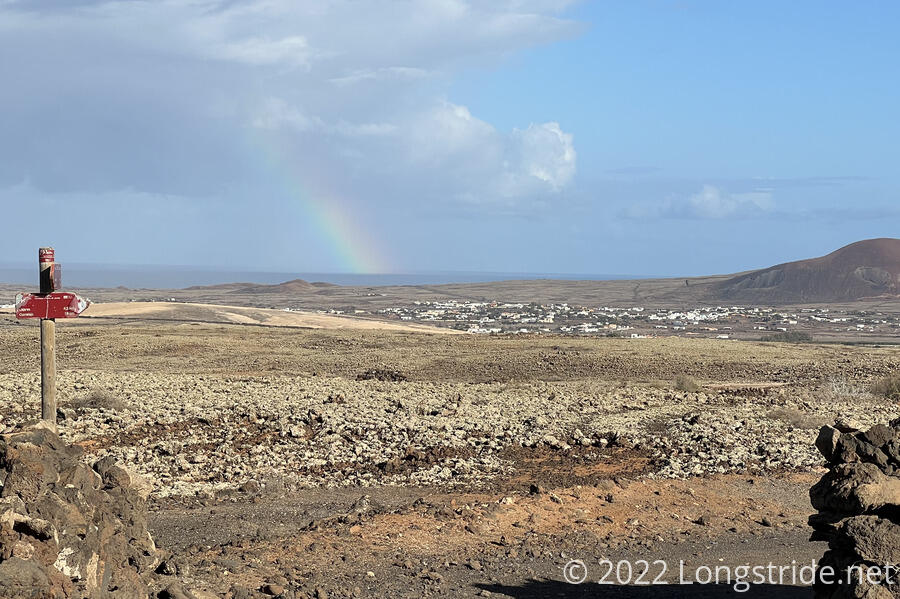 Rainbow Over the Ocean

We reached and passed through the town of Lajares, and decided to stop for a quick ice cream break at a restaurant along the road. Leaving the restaurant, we passed a sign advertising camel tours. Coincidentally, the arrows on the sign were pointing towards five camels (dromedaries) that seemed to just be standing around.

At the edge of town, the trail forked. The GR131 headed east, well away from Calderón Hondo, a volcano caldera. But another several trails went closer to the mountain, and our guidebook described one that ran along the base of the mountain, with an optional spur to go up to an observation deck.

We, however, opted to take a different trail, that ran past the camels (which were now being led back into town by their driver), straight up the caldera’s shorter companion, then along the saddle between the two, and finally up to the caldera rim, fully circling the crater.

With two options available, we took the slightly longer route, circling counter-clockwise to go past the caldera’s summit, and then further around to the observation platform. 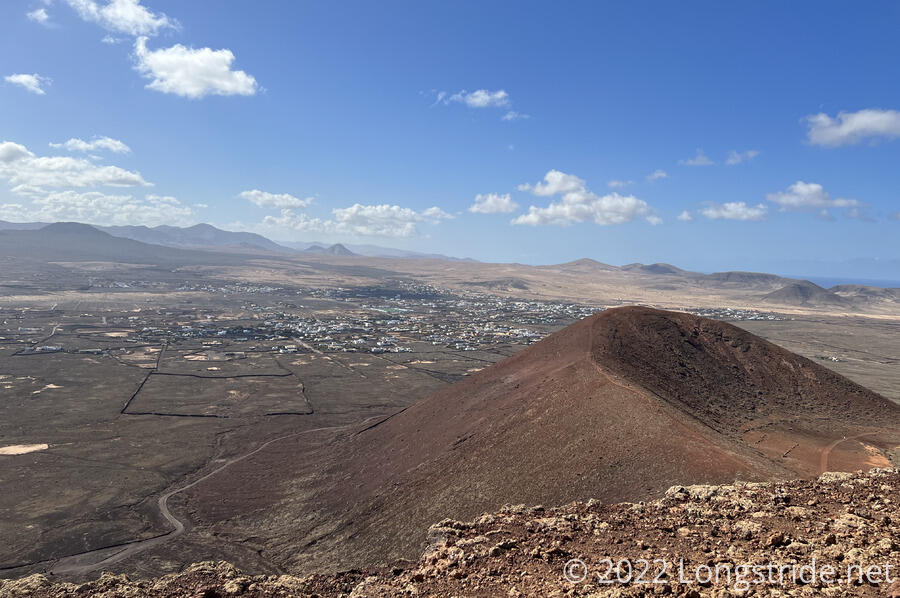 After an occasionally sketchy hike the rest of the way around the mountain, we reached an observation platform. There, a group of several chipmunks skittered around, looking for food. There appeared to be seed casings on the ground, so we assumed that they were getting food from tourists feeding them.

A short hike down the mountain and across a couple of other trails led us to a parking lot adjacent to the road the GR131 had been following. We stopped for a lunch break along a volcanic rock wall, and were immediately set upon by a hungry trio of chipmunks and a pair of lizards.

As we continued down the road, heading back towards Corralejo, we noted that the trail on Fuerteventura has been rather well marked. While it does not have the kilometer markers Lanzarote did, it does have a two-color trail marker painted on short wood poles a bit more frequently. The markers also occasionally point out turns. But one thing the markers do that I haven’t seen anywhere else, and which I very much appreciate, is, an “X” (in the trail’s colors) is painted on rocks near turn-offs that are not the trail.

A winding dirt road led us past a small caldera adjacent to the road. There were also chipmunks here, who were very curious. 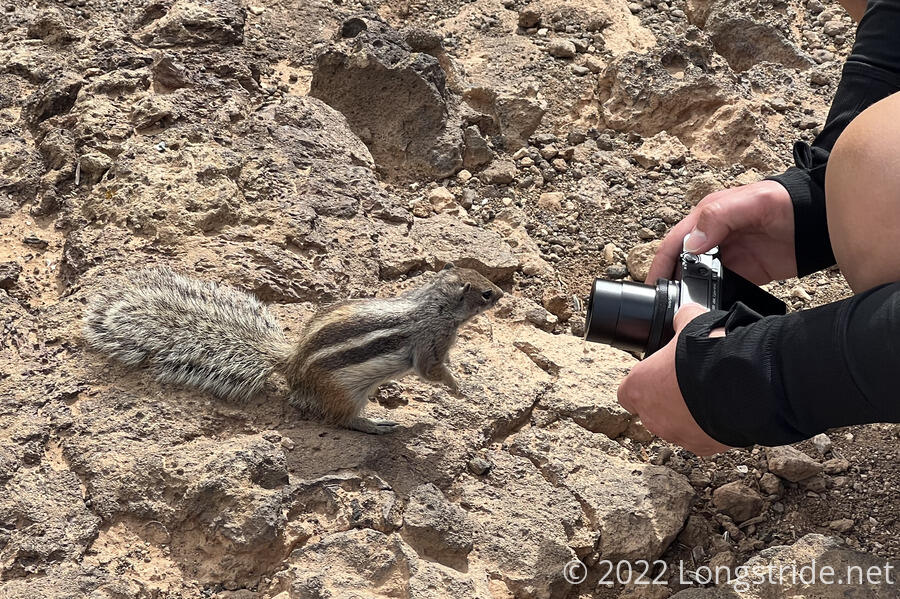 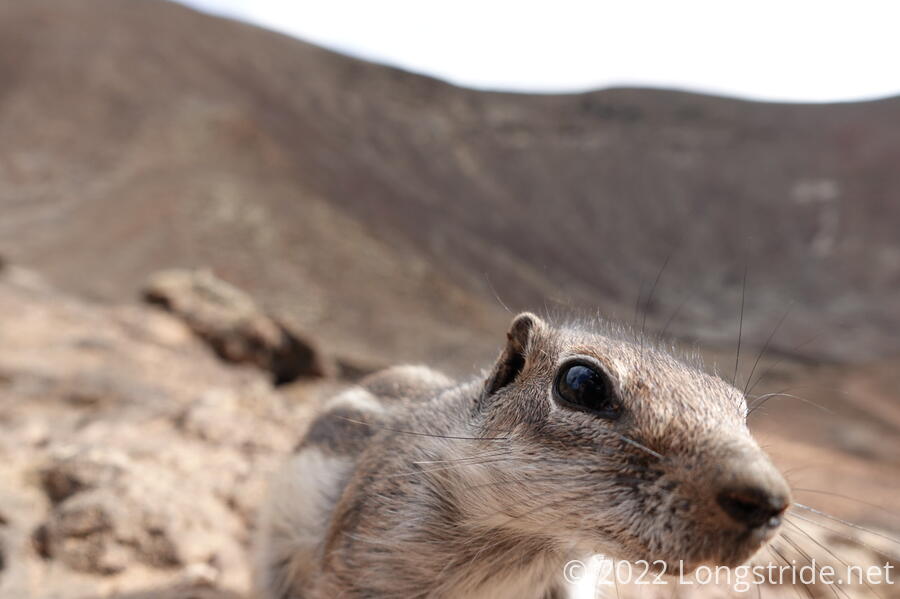 Noting rain clouds over Lanzarote and the ocean, CareFree noted that she’d read that historically, it generally only rained a couple of days in January. At least one of them is today: we got sprinkled on a bit during the last bit of roadwalk to the outskirts of Corralejo.

As we headed towards the city proper, we passed a few in-progress housing developments. They seemed to be taking a photocopier approach, with rows of identical-looking houses.

We made it back to the trail’s starting point in Corralejo shortly after 3 pm, and after resting for a bit, returned to a grocery store for dinner and trail food for tomorrow.