I woke up in the middle of the night to find that the pain in my ankle had migrated to my stomach. After a restless while, I fell back asleep. In the morning, the stomach pain was gone, and my ankle felt way better than it had any right to be, given yesterday's sprain.

I got on the trail around 7:45, slightly delayed after I couldn't find my wallet. It was cool out, which was nice, but it was also very humid after yesterday's rain, so it wasn't long before my clothes were wet and heavy.

The trail from Birch Glen Camp to Cowles Cove Shelter was short and fairly easy, which gave my ankle a chance to prove that it wasn't going to quit on me.

So far, on the Long Trail, I've actually seen quite a few frogs, though they've all been pretty small. On the way to Cowles Cove, I saw one of the largest frogs I've ever seen on the trail. 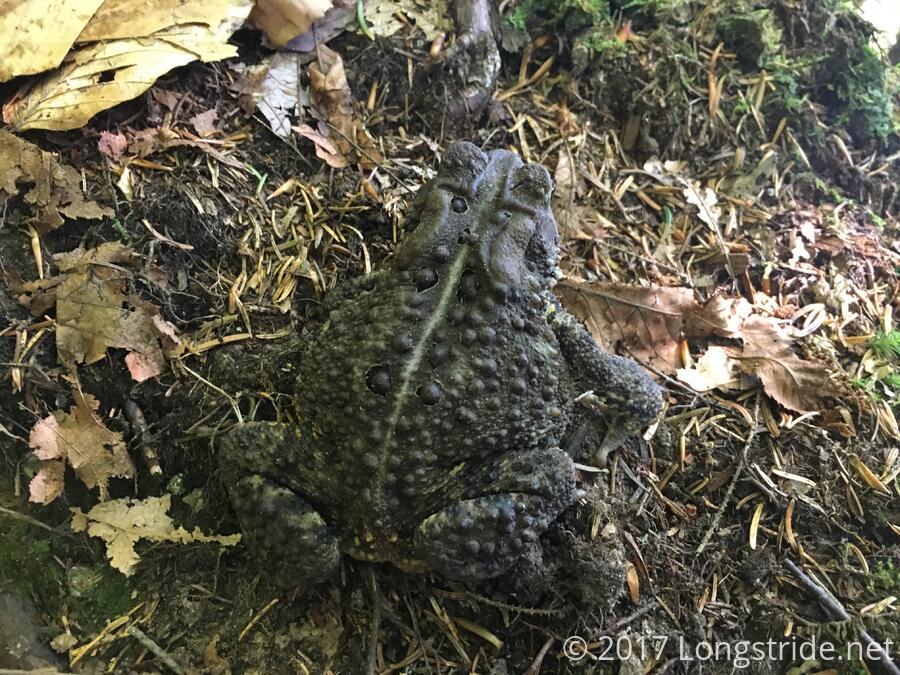 That said, the trail after Cowles Cove did not give me a break at all. From Cowles Cove, the trail first went over Burnt Rock mountain, which as you might expect, was fairly bare. The first part included a bit of a rock scramble, but there were great views of the surrounding landscape during the ascent and at the summit.

After Burnt Rock, the trail quickly made for Mt. Ethan Allen, in what seemed like a climb that would not end. I stopped for a break halfway up at what seemed like a stealth camping site (though a fairly lousy one at that). In retrospect, even with its rock scrambles, the climb wasn't really that bad, but this was yet another mountain that teased views on both sides of the trail through ever-thinning trees, and seemed like it would never deliver. Eventually, though, I did make it to the top, and there was a great view to the east.

I sat down on the rock at the summit and took in the view, and sat there for a long while to dry out my clothes. Someone had clearly cared for this view at some point; there were some trees that had been topped, and others closer to the view that had been cut down entirely, so that there actually was a view.

Another mile downhill from the summit brought me to the Montclair Glen Lodge. Getting to the shelter around 3 pm, I briefly considered continuing on from there, since it was only another five miles or so to the next shelter, but given the pretty steep ascent and descent the map seemed to show over the next mountain, Camel's Hump, I decided this was probably not a great idea.

Now at the end of my hiking day, I took advantage of the empty sheter. After changing into my camp clothes, I laid out all of my hiking clothes on the rock in front of the shelter. After a couple of hours in the sun (during which I gathered water and began to make dinner), they eventually became bone dry. Also, I chased a butterfly around camp until it finally stayed still long enough for me to get a decent picture. 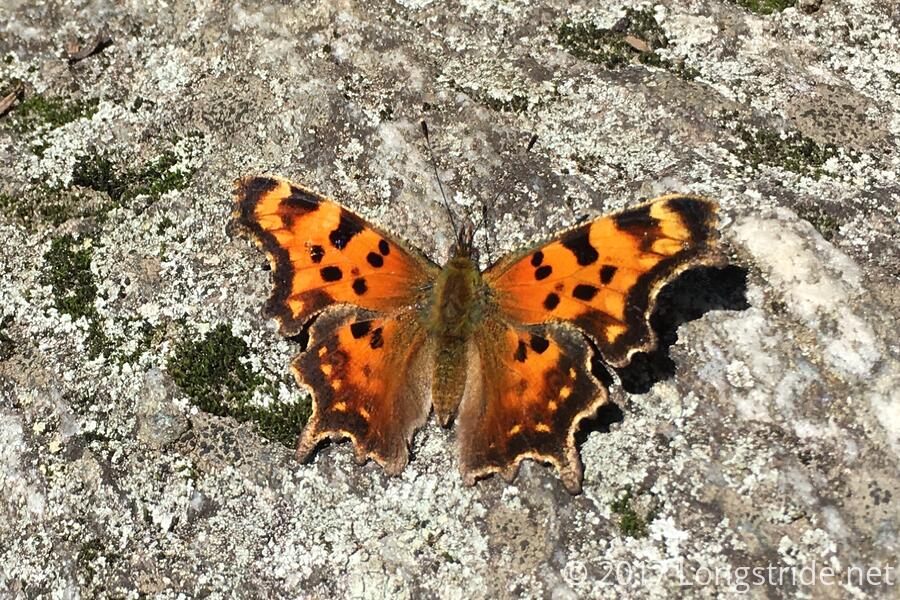 Montclair Glen at one point seemed to have a lot of problems with bears. The door has two signs warning of bears, and two heavy locks to hold the door shut when no one is inside. The inside of the door also has a latch, as well as a "Bearr-icade" to further bar the door against ursine intrusions. (The GMC caretaker, who arrived later in the evening, confirmed that there was a problem in previous years, but there hasn't been any bear issues so far this year.)

There also was some artistic talent at play at the shelter: someone had drawn a pair of moose on the privy door.

Since I needed to go into town tomorrow for resupply, I spent a fair amount of time trying to call a B&B in Richmond, VT, only to continually get a message that they were not accepting calls. (This was reminding me of my difficulty finding a place in Waitsfield yesterday, and again with Greenwood Lake, NY last year on the AT.) Eventually, I stopped fixating on Richmond (which is the town Zippy had mentioned needing to go to for a mail drop), and actually looked into a B&B in Waterbury, the town more prominently listed in the Long Trail End-to-Enders Guide, and managed to get a room on the first try (though it was more expensive than I'd have liked to have spent.)

The many failed phone calls took a toll on my phone's battery life, and when I went to plug it in ... I got nothing. My phone was not charging. This could have been a rather bad thing, and I was somewhat worried about not being able to charge my phone at all, since I had seen no one at all during the day.

That's right: for the first time ever, I saw no one else on the trail at all. In fact, it was over 24 hours from between when Zippy left Birch Glen yesterday, and when Courtney showed up at Montclair Glen.

Fortunately, Courtney had an iPhone charging cable, so my mini-crisis was averted, at least until tomorrow.

While rummaging around looking for something with which to clean out my iPhone's charging port, just in case that was the problem (it wasn't), I found that the tube of superglue in my electronics bag had broken open, sealing itself to the bag and my power adapter. Awesome!

Once Courtney (who is doing a few days of hiking on the LT) arrived, other people started trickling in: Coconut Water (who is currently doing a short southbound section); Sniffles (whom I met at Goddard Shelter, and later at Prospect Rock); Ben, the GMC's caretaker currently assigned to Montclair Glen; and Fern (thru-hiking the LT; I saw her at Inn at Long Trail).

Since Coconut Water had previously thru-hiked the Long Trail in 2015, I discussed my plan with her. Based on her advice that the northern LT was fairly rugged, I decided to break up a few of my longer days to be less aggressive. With my ankle somewhat unhappy, a plan for shorter days is probably a wiser course of action; and I can always go further if the trail winds up being easier than expected.

Courtney also overpacked food, and several times throughout the evening tried to give bags of trail mix away. Coconut Water and I eventually accepted. After all, what kind of thru-hiker turns down free food, right?

All of us at camp wound up staying out at the picnic table until after 9:30, talking and drinking from a bottle of scotch that was being passed around. This will probably not do wonders for my hydration levels tomorrow.

Tomorrow: Should be a simple day: over Camel's Hump and down to US 2 in the Winooski River Valley.