The wind that started yesterday around bedtime only got stronger and louder throughout the night, constantly howling. The clothes that I had hung up to dry were only wetter by morning, and I was surprised they even stayed attached to the clothes line.

I initially woke up around 5:30, as Climber and Sidewinder were getting ready to leave, and since it was clearly cold and windy, I decided that my sleeping bag was a far better place to be. I finally got up around 7, and left camp around 8:30. Since my hiking clothes didn't even begin to dry, and were now wet and cold, I opted to hike in my camp clothes (also supported with my rain pants and fleece, on account of the cold and wind).

The trail today continued through the Sterling Range, first climbing Madonna Peak and Morse Mountain on its way to Whiteface Mountain, and passing through more ski slopes, some of which had fantastic views. 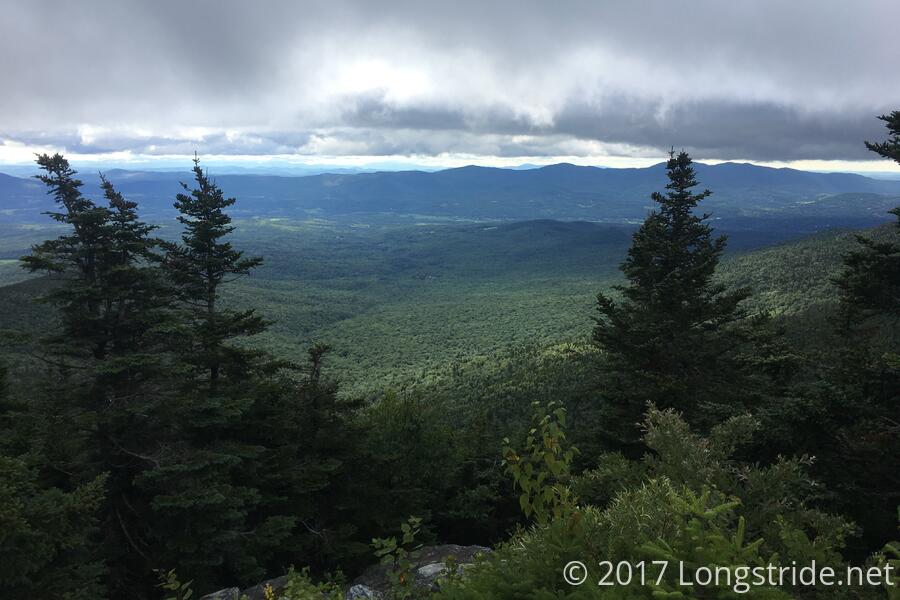 Arriving at Whiteface Shelter a little after 11 am, I took a break in preparation for the final (and steep) ascent of the day. While I was there, a farther and his two young kids (around 6 years old, I guess) came in from the north. Though I didn't say so, I was impressed that the kids were able to handle hiking on this rugged terrain as well as they seemed to have.

Whiteface proved to be the same arduous climb as so many mountains before it, and the summit itself lacked a view. A side trail shortly before the summit did have a view, though. 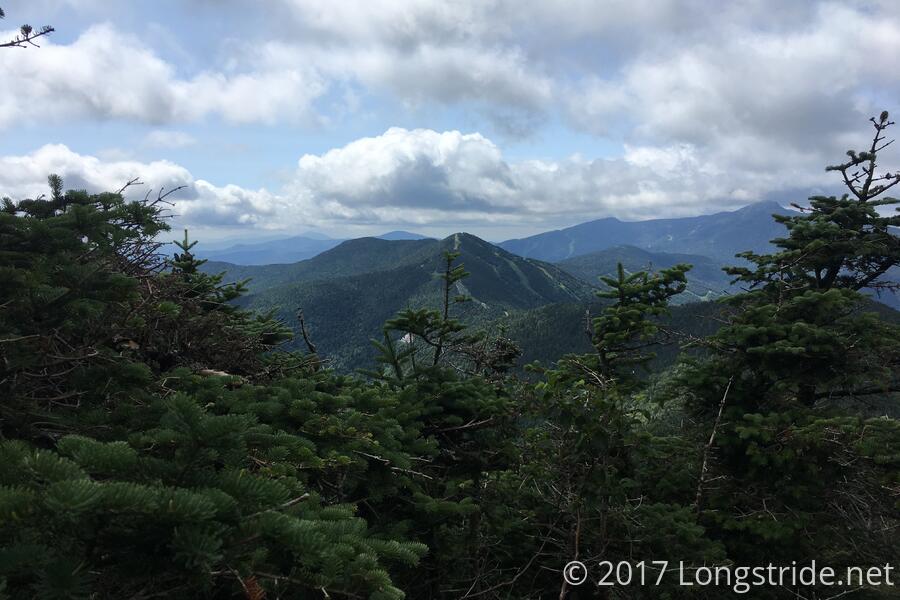 On the north side of Whiteface, the trail continued a steep decline for a couple of miles, before leveling out for a bit, and then resuming a much more modest descent. While still on the steep part of the decent, I ran into Climber and Sidewinder, sitting on the side of the trail chatting with Sidewinder's friend, who was resupplying them, and the friend's three dogs. (Two of them were cold, and tried to huddle inside his jacket; the other was content to munch on some branches.) I joined in the conversation for a bit, but I didn't want to linger too long, since any time I spent not hiking was time I wouldn't be able to spend relaxing at the B&B I was staying at tonight, or in town.

As I descended Whiteface, the trail was actually beginning to feel like a trail again, and not a continuously rugged collection of rocks to climb over. Now making good time, I stopped at the Bear Hollow Shelter for a quick break. Climber, Sidewinder, and company arrived just as I was leaving.

From the shelter, the trail continued a gradual downhill, and eventually joined a logging road, which made for a very easy, and rapid, exit from the mountain. Just before reaching VT 15, the trail joined the relatively new Lamoille Valley Rail Trail, following that for a short while before snaking through a crude trail in the woods behind a cemetery before reaching a small parking area off of VT 15.

Once I turned onto the rail trail, I called Nye's Green Valley Farm B&B, where I'm staying tonight, for a pickup, and after a short wait at the parking area, got picked up by David (one of the owners, with his wife, Marsha). While only a few days since my last shower, this one was every bit as glorious as the one I got in Waterbury. David then gave me a ride into town so I could resupply and get dinner; Marsha later came to pick me up. (The description in the guidebook says they love hikers, and it really does show.)