Today started off with the potential for great disaster. Whatever I had was no mere cold: colds don’t wake me up at 1 am with an urgent need to sit on a toilet. Or, since I was in the middle of nowhere on a mountain, place a landmine before it exploded and made a mess. I’ll spare the details of what ended up in the (very hastily dug) cathole; the important thing was that disaster was averted. At least until 7 am, at which point, the scene replayed itself. (I blame the Mexican food I had two nights ago; Although I was told that it “is the shit”, clearly instead, it gives the shits.)

The other potential for disaster came in the form of a weather report calling for very severe winds (45 mph, with gusts to 60) along the ridges and in the desert, starting tonight. Given what the weather forecast was actually saying about my then-present location, I was not entirely convinced that the severe weather alert actually applied to where I was, or would be tonight. Still, after my previous attempts at tenting in windy weather, I was unhappy about the prospect of trying to ride out winds that bad.

In spite of the urgent stints of cathole duty and not feeling 100%, I still managed to make it out of camp before 8 am, and went practically flying down the trail (fortunately not propelled by rocket exhaust). The trail, continuing its westward track, gave a few more views of Big Bear Lake, before passing through another burned area. This one seemed to have been burned long enough ago for the ground cover to more substantially recover.

The morning, and for much of the day, the trail was largely a gentle downhill slope, and the sun was partially covered by clouds. By the time I reached the day’s first water source at the trail’s first crossing of Holcomb Creek, I had traversed 6.7 miles in just barely over two hours (including a brief stop at the pit toilet at the campsite shortly before the creek for, what I hope, is a final end to the nastiness).

Feeling at least slightly better, I took a water and snack break at the creek with Jay. While we were there, at least a dozen Jeep-like vehicles drove past us and down either of the two forest roads adjacent to the trail there. (One of them even had to stop and ask us for directions; we could only point them down the road everyone else to that point had taken.)

After another six miles or so, I took a second snack break at a small creek not in my guide, and then kept moving along. Being mostly downhill, today was generally pretty easy hiking. 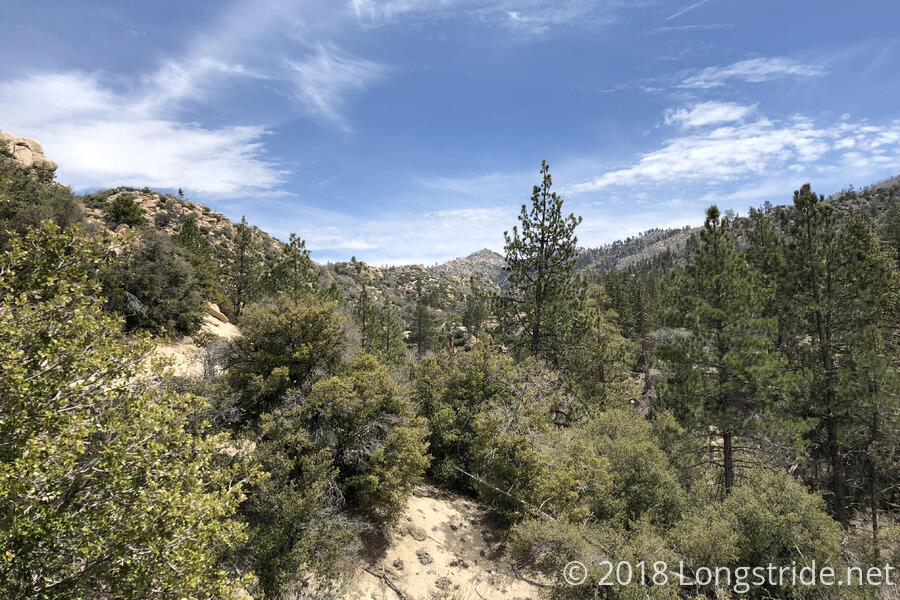 I made it to Bench Camp, my goal, right around 3 pm, having hiked 15.5 miles in a little over seven hours, including breaks, which makes this easily my fastest day so far. Jay got there slightly before me, but only because I stopped to collect water at the creek crossing three-quarters of a mile before the campsite. This was entirely unnecessary, since the campsite had access to the creek. I knew this, but it just didn’t click until I had already started to filter water, at which point, it didn’t make sense to stop.

The campsite was a large, open area, surrounded by pine trees that had dropped some pretty big pine cones. (Jay found one nearly as big as his head!) Despite its name, there was a distinct lack of benches in the area. There was also some light fire damage on many of the surrounding trees. Probably someone camping here before had a fire going and it got out of control.

By the time I had finished with dinner, it was still only 4 pm. With another three hours of good daylight left, I could easily have continued hiking. However, there are no campsites explicitly listed in the guide for quite awhile, and while there are relatively nearby water sources (and there are usually campsites near water sources), I didn’t want to take the risk. Also, by that point, at least half a dozen other hikers had passed us, which made it seem likely those spots would now be in very high demand.

Given the weather report (and our lack of cell service to get updated information, we were somewhat concerned about the expected wind, especially as it got gradually more windy as the evening progressed. The ground being somewhat firm made my tent stakes stay in rather well, but I placed heavy rocks on them to help anyways, just to give them the best possible chance of not coming out. Jay and myself, and Magnet, when he got there, used up most of the rocks readily available securing our tents, leaving few for anyone behind us. I quipped that “The early hiker gets the rocks”.

Later, Enigma arrived, and set his tent up without any rocks at all, expecting the stakes to hold by themselves. Like Jay and myself, Enigma has a Zpacks Duplex tent; all three of us have different colors. Jay noted that the campsite could practically be a Zpacks tent advertisement.

Tomorrow could be a long day, so hopefully it won’t be so cold tonight that I wind up hiding in my sleeping bag until after sunrise.