The trains last night weren’t as bad as I feared; the last one I heard was around 9:30, before I went to sleep. If there were any others past that, the campsite was far enough away from the tracks that I didn’t hear them.

I had two breakfasts for breakfast: an order of pancakes, and an order of sausage, eggs, and home fries. It was pretty good, and filling.

I dropped the Sawyer Squeeze bag that Stuck on the Ground loaned me into the hiker box; it was clear I was not going to catch up to her, and it wasn’t doing me any good carrying around the extra weight of something I don’t really need when someone else could potentially make use of it. I also threw out a spare iPhone charging cable that stopped working.

The cooler weather we had over the last couple of days seems to be at an end; it was definitely warmer this morning than it had been, and the rest of the day was warm as well; I was sweating a bit more than I had been, but fortunately, it wasn’t the 90-degree heat I had been dealing with before.

Due to breakfast, but mostly to trying to use Shelter Cove’s incredibly slow internet, and trying to charge my phone and battery from the charging station in their hiker area, I didn’t leave until 10 am, and I didn’t get back to the trail until 10:30. As I crossed the train tracks, I noticed three maintenance vehicles on the tracks, doing something maintenancey.

The general theme of the day seemed to be lakes. Shortly after rejoining the PCT, the trail climbed up to an overlook to provide a view of Odell Lake (which Shelter Cove is situated on).

After turning away from the lake, the trail crossed a state highway. From the highway, but also a bit before, the trail was almost immaculately maintained: it was smooth, wider than usual, and almost completely feee of rocks, roots, and other obstacles. I initially thought that might have something to do with the Nordic ski trail that shared the PCT’s route, but when I ran into a large group (at least 20 people) at the Lower Rosary Lake, I realized that this area must be very popular for day hikes, and so was maintained with that in mind.

I took a break between the Middle and Upper Rosary Lakes, “only” about five miles in (but more like 6.3 when considering the hike back to the PCT from Shelter Cove). A cool breeze blowing through the shade made for a relaxing snack, and an osprey flying around the two lakes was a nice treat.

I think at least some of the “bees” that have been following me might actually be large biting flies. When they’re flying around, it’s hard to tell, but I finally saw one of them after it landed on me today, and it was definitely a very large, nasty fly.

I took my second break at the junction to Bobby Lake. I was tempted to go to the lake and cook dinner, but the lake was a quarter mile off-trail, and I didn’t want to spend the time when it was late in the day (3 pm) and I still had further to go. I was a bit tired, and I strongly suspected that if I had dinner there, I’d wind up stopping there for the day there as well.

I pushed on to Charlton Lake, and stopped there, 18.5 miles from Shelter Cove, ending my 7-day long streak of 20+ mile days. The next campsite was another 2.4 miles on, but there was no water there, which meant I needed to do dinner at Charlton Lake, and by the time I was done, it’d likely be later than I’d want to leave for another campsite. If I’d left Shelter Cove an hour earlier, that might have been a different story.

The water in the lake looked fairly clear, but there wasn’t anywhere near the shore that I could easily collect water from. (Scooping four liters of water out of a small pool is one thing, but it’s a bit silly to do from a lake.) I was going to have to wade in to get to water deep enough that I could collect it by dragging my water bag through the water. Since the Sierra, whenever my feet get cold from being in water, it becomes painful, and they almost feel like they’re on fire. I wasn’t looking forward to this, but I waded in anyway, and, since I was there, took the opportunity to rinse some of the dirt off of my legs before my feet got too cold. 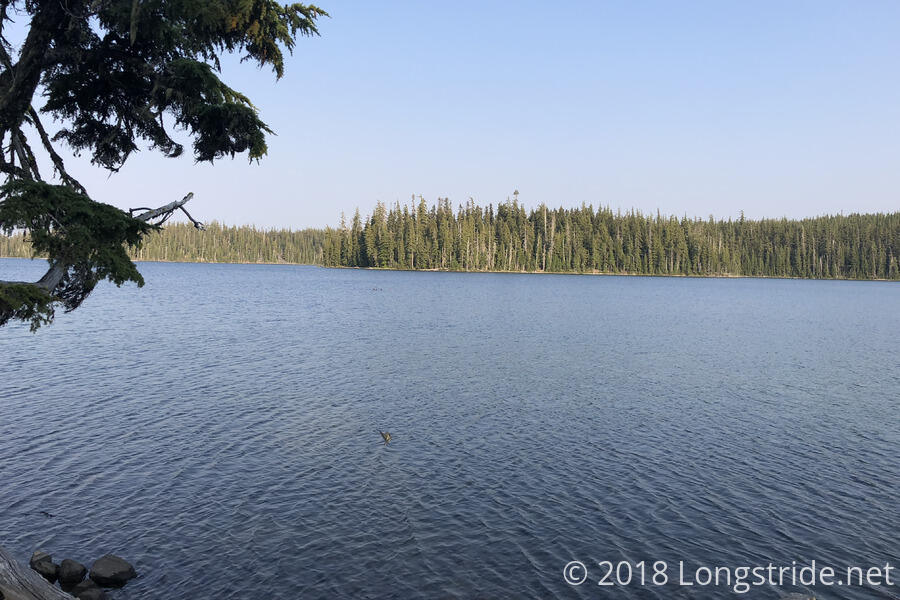 After drying off my feet (and then putting on my sock liners to help keep them warmer, and putting on my boots since my Crocs were now wet), I started my water filtering, and set up my tent and set everything out to cook dinner.

Immediately before I became fully committed to cooking dinner — my water had just started boiling and I was just about to put my mac & cheese in the pot — two women came down the trail from further into the campsites around the lake and said there was trail magic just up the trail. (Actually, all I heard them say was that there was beer, and the hiker setting up his tent next to mine didn’t hear much more than “beer and other stuff”.) But, I could certainly pause dinner to grab a beer and investigate the “other stuff”; worst case, I’d waste a little fuel re-heating the water.

Sparkles, the older of the two women, had attempted a thru-hike in 2016, but had to stop after 1500 miles after developing a stress fracture in her hip. (She plans to finish the trail next year.) Hannah is her niece.

The trail magic put on by Sparkles and Hannah was pretty awesome. There was soda, beer, bananas, chips, pickles, and cookies, and they were cooking grilled cheese sandwiches on a propane stove. (I had four, in addition to everything else I ate there; at least one other hiker was wondering where I was putting the sandwiches.) Planning to be here for a few days, they also brought with them 50 pounds of pancake batter for breakfast.

The party, such that it was, winding down, I eventually left after 9 pm, having to use my phone’s flashlight to see my way back to my tent. I quickly put away my food and cooking equipment, and retired to my tent.

I suspect I was probably under-hydrated today; once in my tent, I drained my water bottle almost immediately — the sodas I had at the magic were clearly not enough to fully rehydrate me.