Today, we left Stehekin, our final resupply complete, and set off on the first half of our hike to Mazama, the last town on the trail. Today was notable for one reason: I saw my first bear of the trail.

With a warm room and nice bed, CareFree and I slept in, and didn’t get up until 8am. Once we did, though, we made our way to the restaurant for breakfast. Service at the restaurant was glacially slow, and it took us over an hour and a half to get breakfast. We also weren’t terribly impressed with the menu; we both ordered two breakfast plates because none of them were hiker-sized, especially not even the meal called “The Hiker”, which was just a small bowl of cereal, fruit, and yogurt.

With breakfast having taken so long, I arranged for a late checkout, since we weren’t going to be able to finish packing before we were supposed to be out of the room. As we were leaving our room, this came as a surprise to the general manager, because they very rarely ever offer late checkout, and a cleaning crew was waiting to get into our room.

Although we were on the waitlist for a room, it was still unclear if we’d be able to get one: they don’t start filling the waitlist until after the second boat from the nearby town of Chelan arrives and they find out everyone who has cancelled. We didn’t want to wait until 4:30 to find out if we’d be able to stay another night (especially as expensive as it would be), so we decided to hike on.

We planned for Stehekin to be our last town stop, but there is one more town between Stehekin and the border: Mazama, off of Rainy Pass, about 20 miles up the trail. There, Ravensong, the first known solo woman to complete a PCT thru-hike, in 1976, maintains Ravensong’s Roost, a donations-only hostel for hikers on the final stretch of the trail. With a weather forecast calling for rain, snow, and thunder, and Mazama not that far away, we decided we’re going to stop there tomorrow. With that destination in mind, that gives us two shorter days today and tomorrow, which will help us get some more rest after the hard stretch into Stehekin.

The PCT north of Stehekin goes through the North Cascades National Park, which requires a permit for overnight camping, which we needed to get since we weren’t expecting to make it all the way through the park today. That required a visit to the park’s visitor center, conveniently located just up the hill from the lodge. We had to pick a specific campground in the park to stop at, so given our relatively late start (and the 6.5 mile roadwalk we’d be doing beforehand), I opted for a conservatively short day of hiking, and picked Bridge Creek Camp as our campsite for tonight, “only” five miles up the trail.

Our timing worked out about as close as it did yesterday: we got our permit and made it back to the bus stop in front of the lodge just in time to catch the 11:30 am bus. As it did on the way in, we stopped at the bakery; I only got a bottle of soda, which I drank on the bus; with more than enough food in my pack to make it to the end of the trail, I didn’t need to buy more food from the bakery, delicious though it might be.

The bus dropped us off at Harlequin Bridge around noon, and after taking a few pictures of the Stehekin River, we set off up Stehekin Valley Road towards the PCT’s crossing at High Bridge, 6.5 miles away. We could easily have taken the bus all the way to High Bridge, but I wanted to maintain a continuous footpath from Campo to Manning Park, and I wasn’t going to let a fire detour get in the way by introducing a short gap. 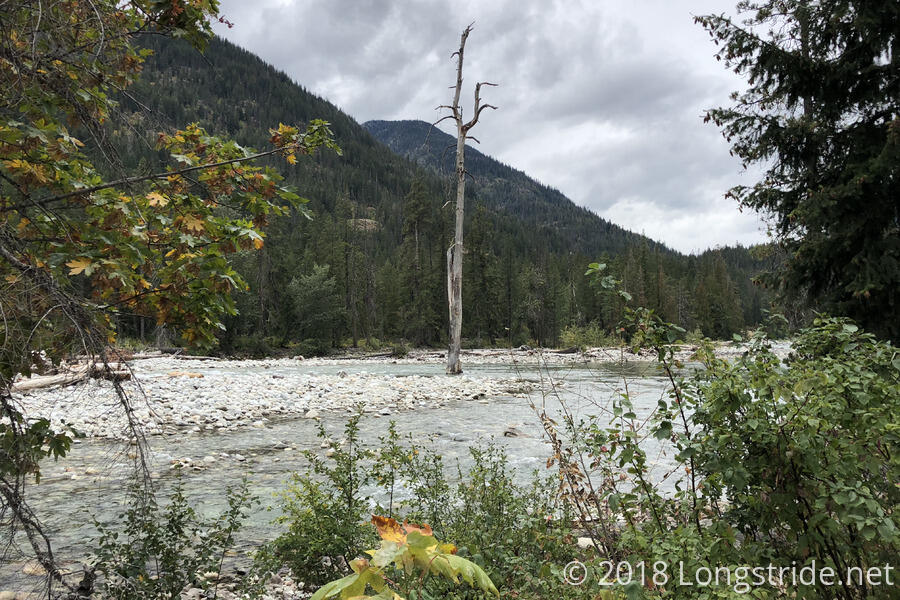 The hike along the road was largely uneventful. The Stehekin River flowed to the west, and the occasional car passed us as we hiked up a gentle incline, reaching High Bridge and the PCT a little after 2. We took an hour-long break at the picnic area near the ranger station there, chatting with some hikers who had just finished a hike and were heading into Stehekin to spend the weekend with their family. A brief drizzle hastened our departure, and we resumed hiking on the PCT just as the next bus from Stehekin arrived.

The trail continued to follow the Stehekin River going upstream, turning northwest at the ranger station. The next few miles were a largely uneventful walk through the forest, passing by a small lake, and it took us just under two hours to make it to the Bridge Creek Campground. 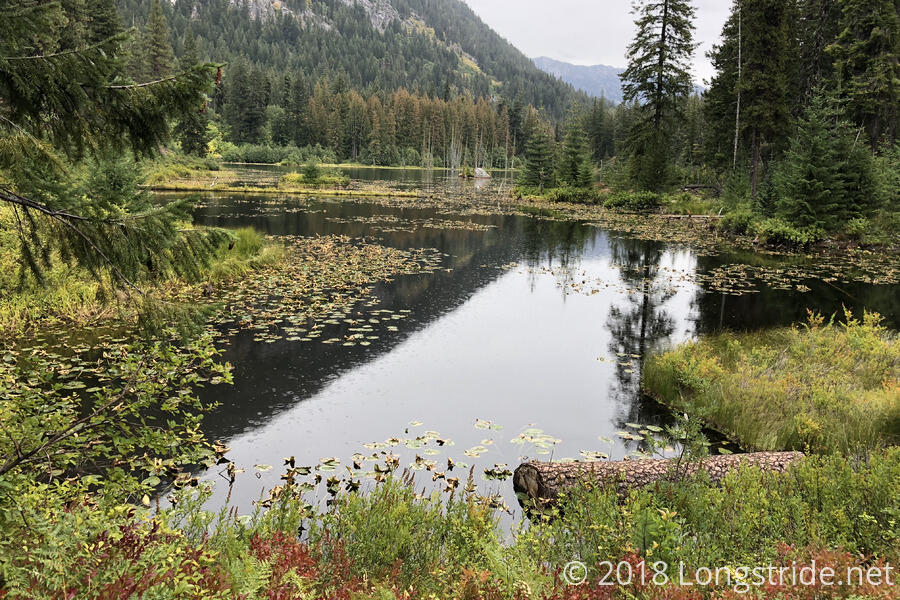 Bridge Creek Campground is one of the larger campgrounds I’ve seen on the trail, with six group campsites available. The site designated for PCT hikers, about a tenth of a mile off the trail, could easily hold a dozen tents, though only one other hiker joined us this evening. We set up camp (during which time a few raindrops fell), and then went to get water.

A short distance away from the camp is the confluence of Stehekin River, which flows from the west, and Bridge Creek, which flows from the north. This was a fairly convenient water source; the water wasn’t too deep, but it was fairly fast-moving. CareFree, unfortunately, accidentally slipped into the river while filling up her water bottles, soaking one of her shoes. So much for staying dry today! 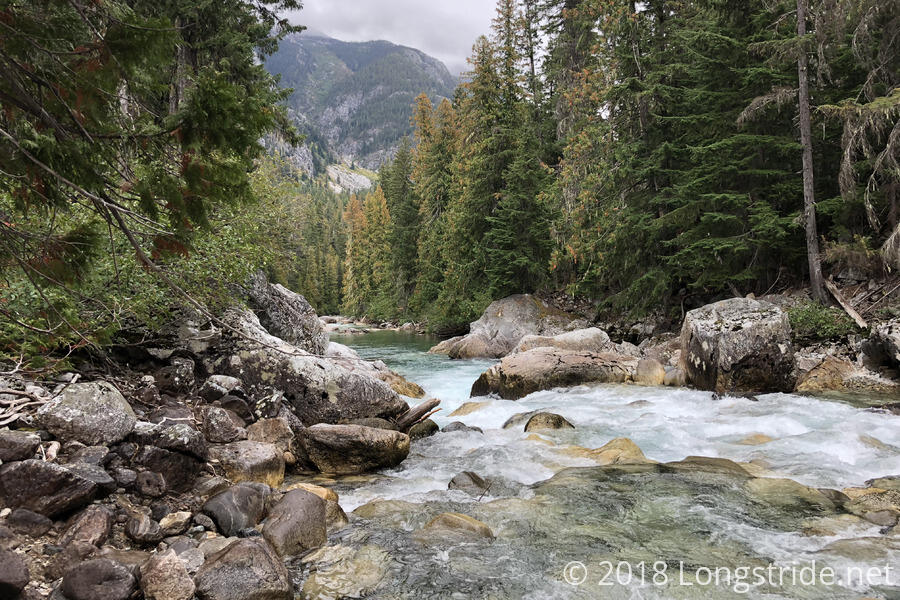 Back at camp, Phoenix (whom I first met back in July, and saw occasionally since then) arrived as we were getting ready to cook dinner. Just before we started cooking, CareFree and I saw a bear lumbering down the hill a few hundred feet away from our campsite. This was the first bear I’ve seen on the PCT, and given that I’m almost finished the trail, it’ll likely be the only bear I see on the trail. We called Phoenix over, and the three of us watched the bear for four minutes, before it finally noticed us and ran off.

After the bear left, the evening was uneventful. We finished cooking and eating dinner, and set an alarm for tomorrow morning.