The easiest way to get a hiker to move faster is to have it rain on them.

We picked a good campsite last night in that it wasn’t windy at all. But it was a bit cold, and I didn’t sleep all that well as a result.

CareFree and I left camp a little later than I would have liked, but we made good progress up Relay Peak, and summited just before 9 am. We had nice views of the surrounding landscape, and the clouds that had started to collect yesterday were still in the area, along with some new friends.

The climb to Relay Peak, the highest point on the Tahoe Rim Trail at 10,336 ft, also gave us our first snow directly on the trail. Fortunately, it was only a few feet across, and relatively easy to step around. As we left the summit, a tiny bit of rain fell. 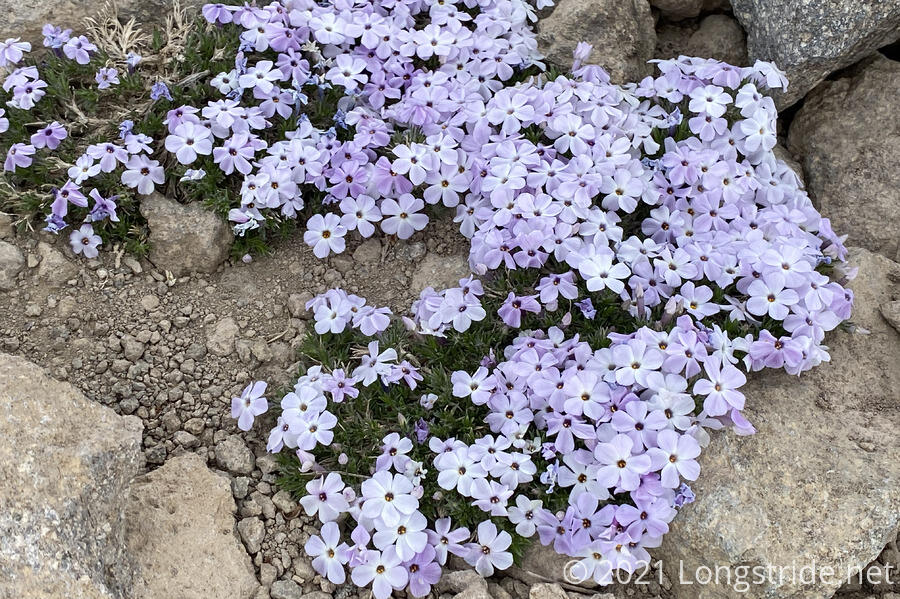 A little further ahead on the trail brought us to a side trail to Mount Houghton, three quarters of a mile away. I convinced CareFree we should summit it, since at 10,490 ft, it would be the highest point of our hike.

The summit of Mount Houghton featured a nice cool breeze, some cloud shade, and a rock chair large enough for two. It also gave us one of the best views of the day.

View from Mount Houghton — Lake Tahoe is on the left.

While a far cry from trail legs, I think I’m starting to acclimate to the trail, and over the course of the day, we had to stop for breathers less frequently. (Granted, the majority of the day was downhill, which helped, but even then I think we did better than previous days.)

Our next stop was the Galena Falls, a small waterfall perched above a meadow. With a cool breeze and tiny bit of shade, it made for a nice spot to take a short break. 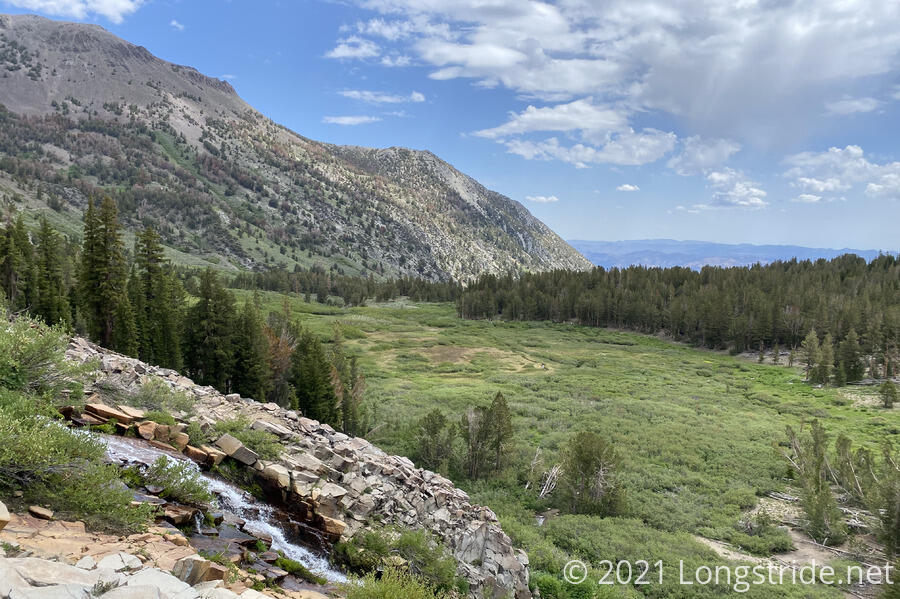 Leaving Galena Falls, we noted quite a number of day hikers visiting the falls, and even more between the falls and the trailhead 2.5 miles away. It was easily the busiest stretch of trail we’d been on.

Shortly after the falls, we passed a stretch where many trees were knocked over or down in a pattern pointing away from a mountain face higher up. We suspected there had been an avalanche or rock slide at some point.

Our next stop was the Mount Rose Campground, to get water. I’d wanted to cook dinner there, so as to reduce water needs and weight since we were planning to dry-camp again tonight. However, the campground had a sign posted disallowing day-use so instead, we limited our time there to a bathroom break, getting water from the water pump, and having a quick snack. We also re-evaluated our plan, given we discovered a lengthy no-camping zone tomorrow, and decided that we needed to go as far as possible today so we could make it to a campground about two-thirds of the way through the no-camping zone tomorrow. I decided to cook dinner at Ophir Creek, a mile and a half after the campground.

Leaving the campground, the trail took us towards and through a meadow on the way to Ophir Creek. Ahead, we noticed a troubling sign: dark clouds. 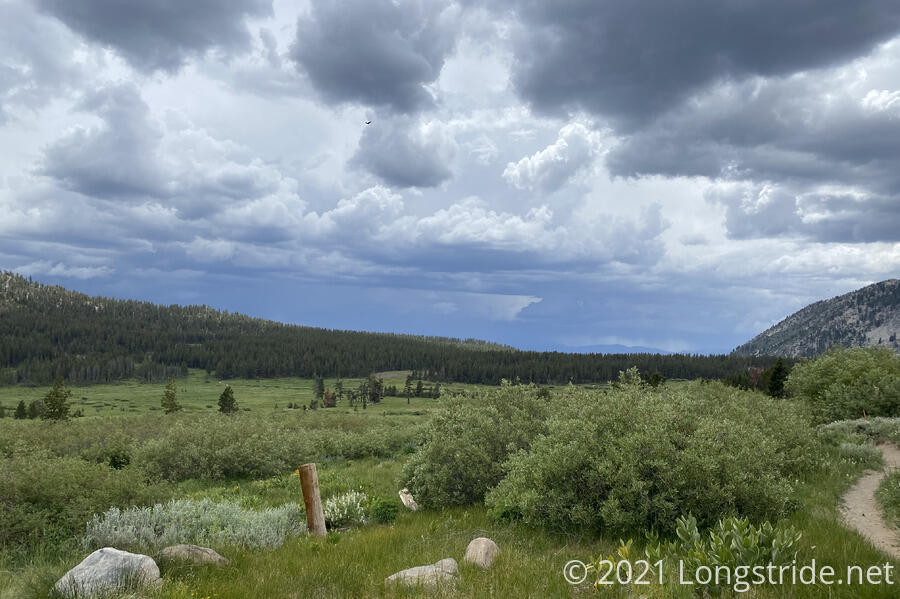 The creek was a popular area for day hikers, with a nearby parking lot and several trails through the meadow. There were (still) quite a few people there when we got to the creek; apparently, the approaching rain clouds did not scare them away.

Deciding that cooking dinner with rain clouds approaching was a risky proposition — the last thing I want to do is cook dinner in the rain — we crossed the creek and headed uphill.

Not twenty minutes after we crossed the creek, the rain finally started, a light drizzle at first, and then picked up a little. The thunderstorm promised earlier in the week had arrived. At that point, our rain jackets went on, and I was very glad to have one — the rain was cold, and the rain jacket was the only thing keeping me warm enough to hike quickly.

And hike quickly we did. With thunder in the distance, we wanted to be somewhere “not here” as quickly as we could be. Also, the cool air and cold rain (and lack of sun) helped cool us down, making hiking faster much easier.

Despite the clouds, we still got some nice views of Lake Tahoe. Besides the mountains in the distance getting rained on, it looked like a cloud was dumping water directly into the middle of the lake.

The rain only lasted for about half an hour, and it didn’t really rain that hard, but it did cool the air quite a bit, and I was able to continue wearing my rain jacket all the way to camp. It did, though, stop conveniently a couple of minutes before we reached a small spring, and we decided (well, CareFree strongly urged) to get more water, since I really only had about enough to cook dinner and maybe have a little left over to get to tomorrow’s first water source.

We collected another couple of liters of water and hauled it up to a small hump in the mountain, where there were a few trees to hang my water bag on for filtering. 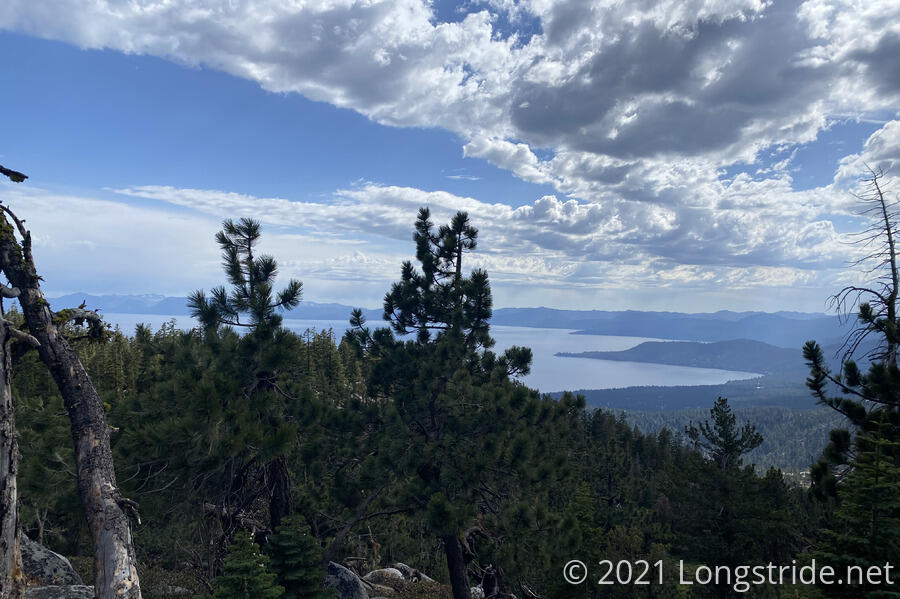 The clouds cleared and the sun came out, and we continued our hike without the urgency the rain had brought. We were a bit tired, though, and started looking for campsites. Our original goal was a campsite with a view, but with the rain, and the wind that had started to pick up, we decided that camping someplace with a view would probably get us a very windy campsite. We settled on a site a little off trail down in a small depression, somewhat protected from the wind, half a mile before the view we were considering.

Not long after finishing dinner, it started raining again, and rained for about an hour. Fortunately, my tent kept us warm and dry.

Tomorrow: roughly fifteen miles to a campground over a mile off trail and down a mountain, thanks to a no-camping zone.