Today was a much better day of hiking for CareFree and myself, and we exceeded our distance goal, though we were quite tired out from the effort.

Sunrise was at 5:34 am this morning, and I was wide awake. Whether that’s because I’m still running on east coast time, or because a tent does little to block out the gradually brightening sky, I can’t say. Probably some of both.

Knowing the best defense against the hot sun is to start hiking as early as possible, I pushed us to start early, and we managed to leave camp before 7 am, which is practically unheard of for me (let alone CareFree). 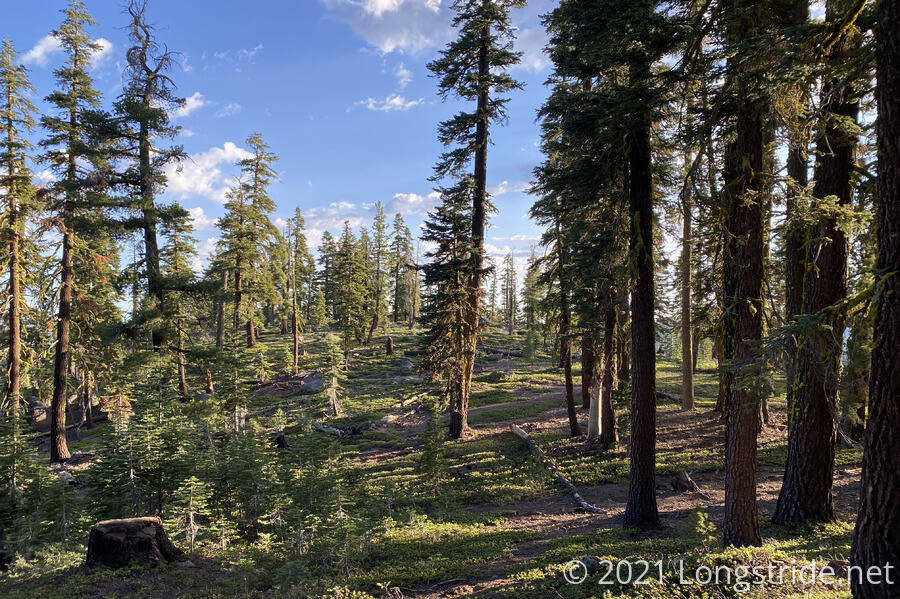 The trail followed along the southern face of Mount Watson, giving obscured, but nice, views of Lake Tahoe for a few miles. I wanted to summit the mountain (and possibly also get views looking out away from the lake), but given our water situation (less than half a liter each), we couldn’t justify the three-mile round-trip to the summit. 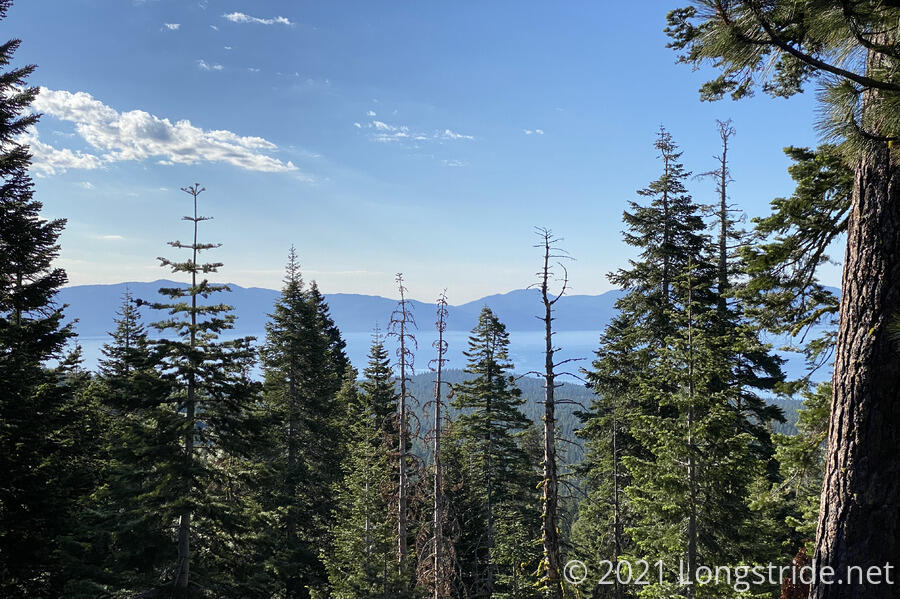 Lake Tahoe from along Mount Watson

We hiked the 5.6 miles to Watson Lake in a little less than two and a half hours. It wasn’t a record setting pace for either of us, but it wasn’t bad for two water-rationing out-of-shape hikers carrying entirely too much food.

The lake was a little disappointing, though through no fault of its own. As we approached the lake, we were greeted by two dogs running free. Fortunately, they quickly lost interest in us and returned to one of the surprising number of small RVs at the lake. Also to our displeasure, at least one of the RVs had dumped food waste in the lake near the boat ramp adjacent to the RVs.

There was, though, a nice fallen log we could sit down on a fair distance from the RVs, and a trail around the lake that led to another place we could get water — far enough away, we hoped, to prevent contamination from the food, and also the dogs that were splashing around in the lake chasing a toy. The lake was also covered with a thin layer of pollen, but the bathtub rings on the rocks along the shore looked far more gross than the lake water itself did.

There was a nice breeze — almost too cold — that helped cool us down from the morning’s brief hike quite nicely. We took an hour and a half snack and water filtering break, and collected enough water to last us halfway through tomorrow: from Watson Lake, the next water source is Gray Lake, seventeen miles ahead and a bit off-trail. 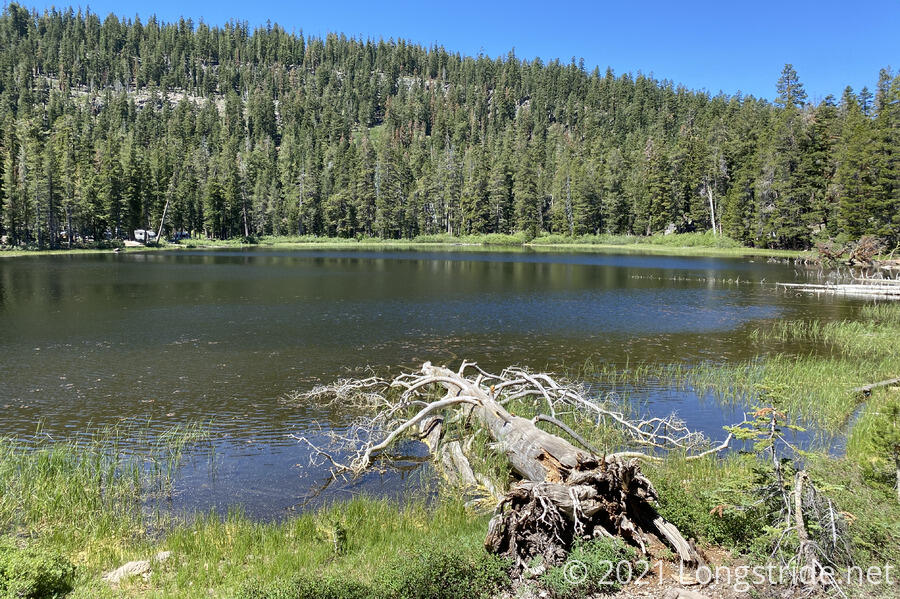 Yesterday; and for a while this morning, there were a lot of volcanic rocks on the ground, providing a glimpse into the Tahoe Rim’s volcanic past. (Lake Tahoe was formed when a volcanic eruption plugged the outflow of a river, allowing it to flood the valley.) As we got further from a cinder cone marked on the map yesterday, the volcanic rocks started to diminish.

As morning progressed to afternoon, the sun rose higher and the morning clouds all but disappeared, leaving a hot sun to bake us when we weren’t in the shade (which was most of the time). Our pace slowed considerably, and we took frequent short breaks to cool down. (It also didn’t help we were carrying extra water since we needed to dry-camp.) Alas, there weren’t many views during the early afternoon, but we did pass by two very large trees; one was a hollowed-out stump more than large enough for a person to stand inside, arms spread, and living version of that type of tree that provided a nice amount of shade for a short break even with the sun nearly overhead.

Our 12 mile goal for the day would put us on the road to Kings Beach. We thought we might be able to go further, but the allure of town was strong. We decided to decide whether to go into town once we got to the road.

Once we did get to the road, a little before three, we tried calling the hostel in Kings Beach, and got no answer. I looked rat some other lodging in town, but after the first one was a two-night minimum, we decided that finding a place to stay was going to be more complicated than we were willing to put up with standing on the trail, and decided to continue on. It was almost like the trail didn’t want us to go into town. I was slightly disappointed, since I had gotten myself used to the notion of getting a shower tonight to wash all the dust off.

The next campsite we knew of was almost six miles ahead (and uphill), which I was not looking forward to given the burning sun, but since we were now going to be ahead of our plan, any bonus distance we did could come out of tomorrow’s budget.

Our next stop for the day was Picnic Rock, a popular viewpoint a mile and a half uphill from the road; off of a short (but somewhat steep) side trail. I was pretty exhausted once we got there, due to the sun exposure. I was tempted to cook dinner to reduce pack weight and sit out more of the sun, but there wasn’t really a very good spot to sit that was shaded and had enough space to spread out for cooking. So instead, we just sat there in a little shade for half an hour, cooled a little by a nice breeze, and the occasional cloud that saw fit to pass in front of the sun.

The reward, though, was a very nice view of Lake Tahoe, probably the best so far.

We descended from the view, and continued on, in search of a campsite. There were several possibilities to choose from that were mentioned in our trail guide, all varying distances further uphill. We decided that that would probably be too far to be comfortable, since we were already past our mileage goal for the day. So we decided to stop at the next good campsite we found.

Eventually, we found one, near an abandoned road. It was not very scenic, and not actually that great a campsite, but it met our needs, and we were too tired to go uphill any further.

We cooked dinner; I skimped on the second part of mine (ramen) because I was still water rationing to ensure I’d make it to a water source tomorrow. I was too tired to cook the ramen anyway.

While we were cooking, quite a few incredibly loud cyclists passed by. Once they stopped coming, though, we had ourselves a nice, quiet, somewhat secluded campsite.

Tomorrow should be another twelve mile day, though since we went further today than planned, we may cut that slightly short depending on how we’re feeling.

Tahoe Rim Trail, 2021
« (Day 1: The First Day Is Always The Hardest) Previous Entry
Next Entry (Day 3: Uphill Towards the Clouds) »