Our steady hike south along the eastern side of the Tahoe Rim Trail continued, but so did the sun, and general lack of water and tree cover.

It seems that every time I go out on a long hike, I have to be re-reminded that the moon is actually very bright. At some point last night, the full moon was shining directly into my tent, directly at me, as if it were a spotlight. Even through the tent, it was bright enough to read by.

There are only three water sources between here (the North Canyon Campground) and South Lake Tahoe: the creek here at the campsite; Spooner Lake, which is a mile off-trail; and Edgewood Creek, which is almost to town. This means that practically, we’d need to collect and carry water for the entirety of today and tomorrow.

CareFree and I were also not relishing having to climb a mile and a half back up the mountain to get back to the Tahoe Rim Trail, just to lose that elevation on the way to Spooner Lake. However, as luck would have it, there is a dirt road that runs between Spooner Lake, the campground, and Marlette Lake. Taking the road, while cutting off some TRT views, would also take us to the west side of Spooner Lake, saving the climb, and take us about halfway around Spooner Lake’s loop trail, before bringing us back to the TRT.

So, we decided to take the road, in order to prevent several miles of backtracking, and we started hiking down a nice dirt road that (based on tracks) seemed used primarily by bikes. 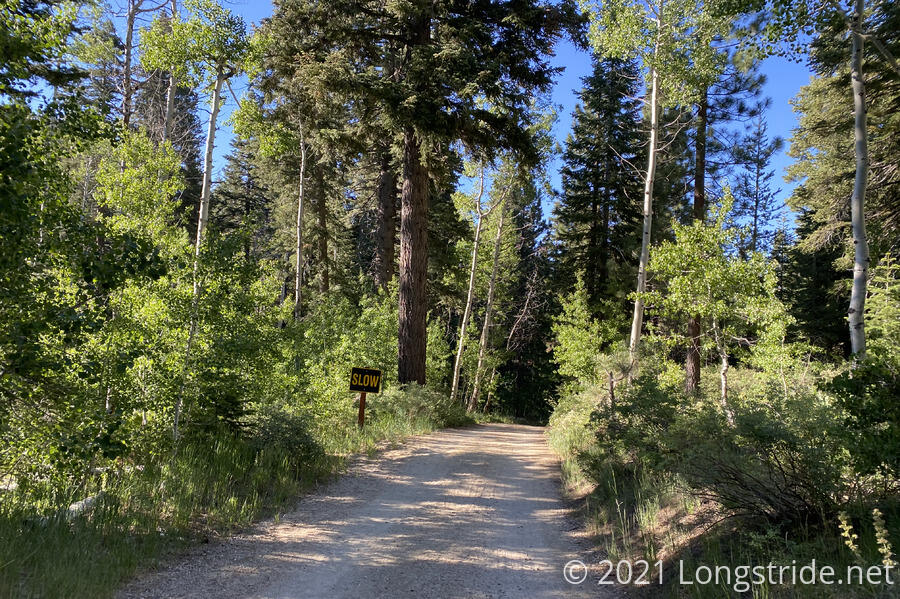 The road was a nice and shaded start to the day, and while there were no scenic views, we did pass by Spencer’s Cabin, a tiny (280 sq ft) cattleman’s cabin built in the 1920s. Meadows that were probably once home to cattle also adjoined the road. 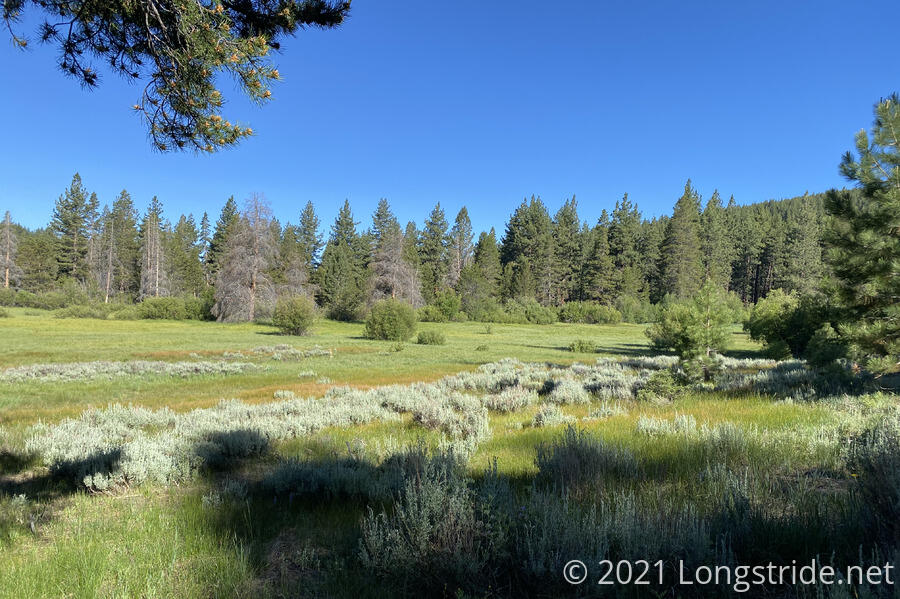 We also saw bear tracks along the ground, and as we got closer to Spooner Lake, we passed an increasing number of cyclists and runners.

We reached the lake a bit under two hours after we started, and found the water to be fairly clear and stocked with quite a few fish. We had a nice break, and had some snacks while we were waiting for water to filter.

With all the extra water we’re carrying, our packs aren’t getting any lighter — one liter of water weighs about as much as a day’s worth of food for me. “Packs are supposed to get lighter as we get closer to town!”, I complained. 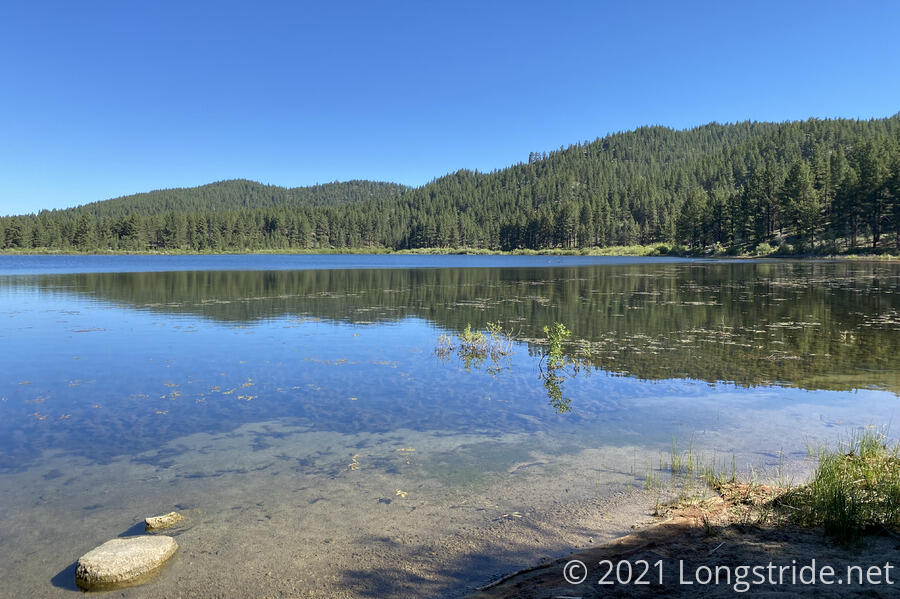 Leaving the lake, we began heading uphill towards the trail’s eastern intersection with US-50. (We’ll cross again, further to the west, on the section of the Tahoe Rim Trail that overlaps with the Pacific Crest Trail).

We also ran into a group of bikers who seem to have gotten lost trying to reach Marlette Lake. I gave them directions down the road we’d hiked along, and then privately wondered how a group of five cyclists didn’t have one map between them.

There are trailheads on both sides of US-50; at the northern trailhead, we found trash cans and happily shed a little dead weight. At the southern trailhead, we found a water cache, now down to 1.5 gallons. I chugged a third of a liter from my water bottle and replenished it from the cache. Although only 10 am now, the sun was quickly rising, and with no clouds to diminish it and the protective canopy of the forest around the road and lake now behind us, it was quickly becoming warm out, and though we were carrying plenty of water, a little extra wouldn’t hurt.

From the trailhead began a five mile climb up a mountain. Along the way, we passed two TRT hikers going counterclockwise, several day hikers, and an awful lot of mountain bikers. Based on their gear, CareFree thought many of the bikers weren’t “serious” bikers, and it showed: despite that they should have been considerably faster than us, we constantly leapfrogged with them on the way up.

After about an hour, we took a break in the shade. Apparently, a pair of small birds took exception to our sitting underneath their tree. Almost as soon as I sat down, one or both of them started chirping incessantly.

Another hour later, we took a short side-trail to reach a view to the east. There were well over a dozen people — day-hikers and bikers alike — sitting in the area taking in the view, including almost everyone that had passed us on our way up the mountain. We took in the view for a few minutes and then continued on; it was far too crowded for our tastes. Instead, we stopped for a break a bit further up the trail, under a tree with some shade. 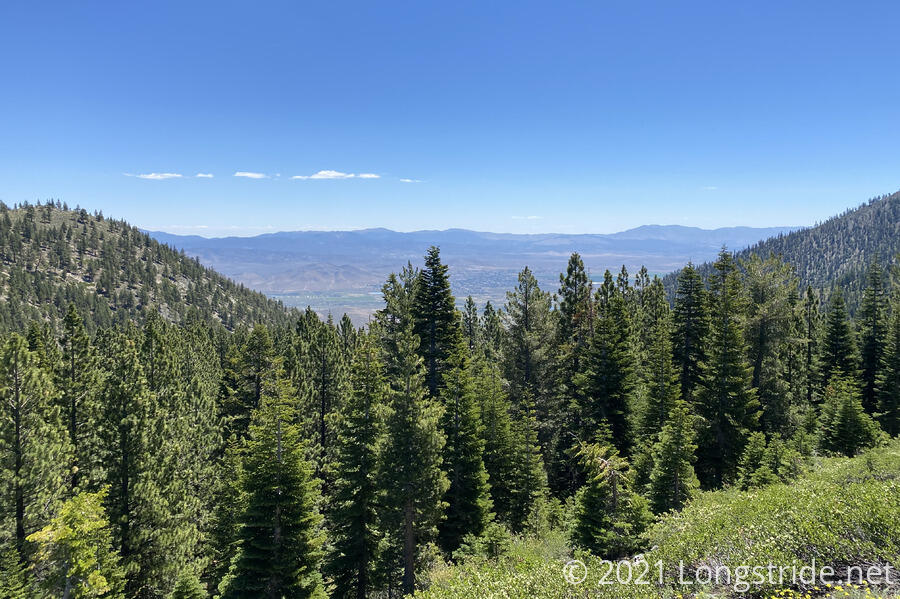 The trail shifted between a few different landscapes today; after leaving the forested (and relatively lower altitude) North Canyon Road and Spooner Lake with a larger deciduous tree content, the trail became again dominated by pines and considerably more exposed as it climbed, eventually returning to an nearly treeless bald near the top, and returning to more trees (with actual shade) as we later descended the mountain.

I try not to hike “competitively”, but after two pairs of backpackers passed us (one of which seemed a father-son pair, and the other had a hiker with a gallon jug of water half-full strapped to their pack) while we were on a break, and with campsites seemingly on short supply for the day, I was a little worried about actually getting to a campsite at a reasonable time today. Later, when I caught glimpse of one of the pairs, I picked up my pace somewhat and CareFree and I charged up the hill, passing one of them (and the second one later, while they were on a break). It was probably unnecessarily energy-intensive (and thus, also, costly in terms of water), but it does feel good to be able to feel my trail legs starting to come back.

Our five mile uphill completed, we began a longer descent, still working our way south towards town, tomorrow. As we progressed, we continued to grow more tired, and CareFree’s feet (which don’t particularly enjoy downhills) began bothering her more. We stopped for a few breaks, and re-evaluated our choice of campsite for the evening. Originally, we were going to stop at a small campsite with a view of Lake Tahoe, but I realized that, now that we are on the east rim, any view of the lake in the evening is going to have lots of sun, and likely very little shade. We began considering potential campsites we passed along the way, eventually finding one that was not terrible, just off the trail, about half a mile short of where we had aimed to go today.

By the time we got there, I was exhausted, mostly from all of the sun exposure today. We probably could have gone further, but, stopping was the right choice, even though it wasn’t even 3:30 pm yet. This was an uncharacteristically early stopping time for us, but, not all days can be long days.

We relaxed for an hour in the shade, and then started cooking dinner. Right after I started to boil water, my cook pot fell off my stove, spilling all its water on the ground.

Fortunately, this happened before the water boiled and I put food into the pot, so I didn’t lose any food, but spilling that water represented a significant amount of the water I had left, and it also meant I could only cook part of my dinner, since I now lacked the water to cook all of my dinner and still make it to town tomorrow. Overall, a mild annoyance, but in other situations, that could have been a minor disaster.

At our campsite, we also found another stake that had been left by a hiker, the same kind of stake we found when we took a break entering the Lake Tahoe Nevada State Park yesterday.

CareFree and I agreed that this was one of our least favorite days on the trail. To an extent, I think this was because we were getting tired and anticipating town. The sheer number of bikers going in the same direction we were (and the constant leapfrogging, through almost the whole day), and the somewhat limited views today also put a damper on things. We did find it slightly amusing (though tiring) that, breaks included, we were largely hiking faster than some of the groups of bikers were biking; it seems to me that if the hikers are outpacing the bikers, someone is doing something wrong.

Tomorrow: we re-enter California and hike into South Lake Tahoe, to take a well-earned zero day after a week of hiking.