After a week on trail, today’s hike brought us to South Lake Tahoe, and our first day of rest.

Though I’d have liked to have started earlier so that we’d get to town earlier (and have less sun in the process), CareFree and I started hiking a little before 7:30, while it was still relatively cool and shaded out.

Shortly after leaving our campsite, we ran into a hiker heading counterclockwise along the Tahoe Rim Trail. He was “Seventy Seven”, a hiker who had thru-hiked the Pacific Crest Trail in 1977 (hence his trail name). Seventy Seven also completed the Appalachian Trail in 2017 (a year after me), and the Colorado Trail last year.

Hiking long-distance trails had changed a lot since 1977. Of course, there was no GPS and cell phones, and gear was somewhat heavier. But the infrastructure that has since grown up around trail towns to support hikers (to say nothing of trail angels — people who go out of their way to help out long-distance hikers) simply did not exist, and guidebooks were necessarily sparser and (being print) out-of-date.

Continuing down the mountain, we soon reached the campsite we were originally aiming for yesterday. There were two spots, actually, though just about exactly big enough to fit one tent each without much margin. And, as I predicted, there would have been no shade had we gotten there yesterday, so we were quite happy we’d made the decision to stop where we did. 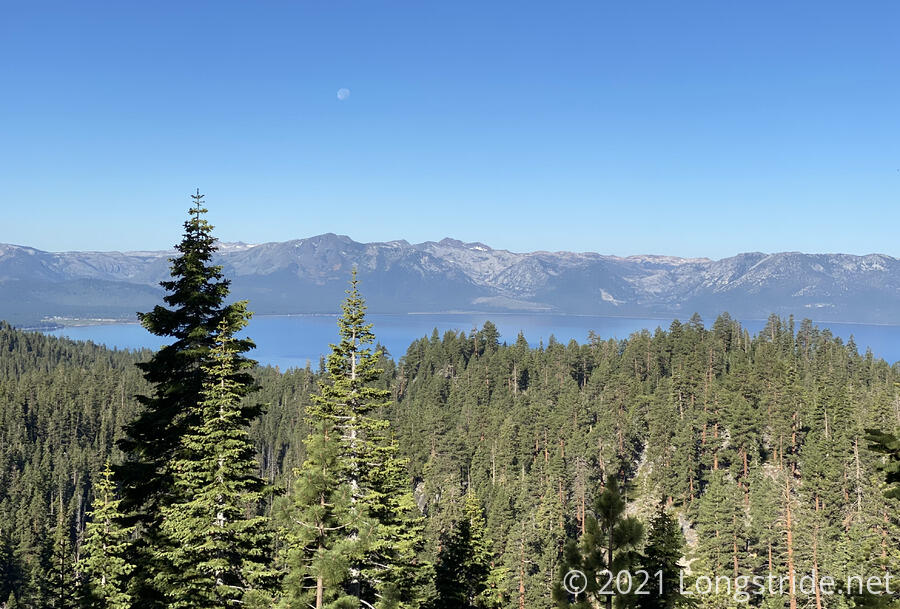 The Moon over Lake Tahoe

As we continued down the mountain, we passed a side trail to Castle Rock. I’d hoped to summit it, however, it was Peregrine Falcon nesting season, and the summit was closed so as not to disturb the falcons. (This isn’t the first time that’s happened: I was similarly prevented from summits on Mt. Horrid’s Great Cliffs on the Long Trail, and Pilot Rock in Oregon on the Pacific Crest Trail due to nesting falcons.)

The trail also took us (and bikers, but not equestrians) on a circuitous route through a small rock maze, seemingly just to have some fun. As we approached the next road junction at Kingsbury Grade Road, there were a lot of side-trail well-marked with posts. (And in a couple of areas, the TRT itself seemed to be over-marked, seemingly for no reason.)

Around 9:30, we took a break at a clearing along the trail that provided us with our first view of South Lake Tahoe (in California) and Stateline (which straddles California and Nevada). Stateline’s casino high-rises in Nevada dominated the two towns, and almost seemed like an unnecessary blight on the landscape. 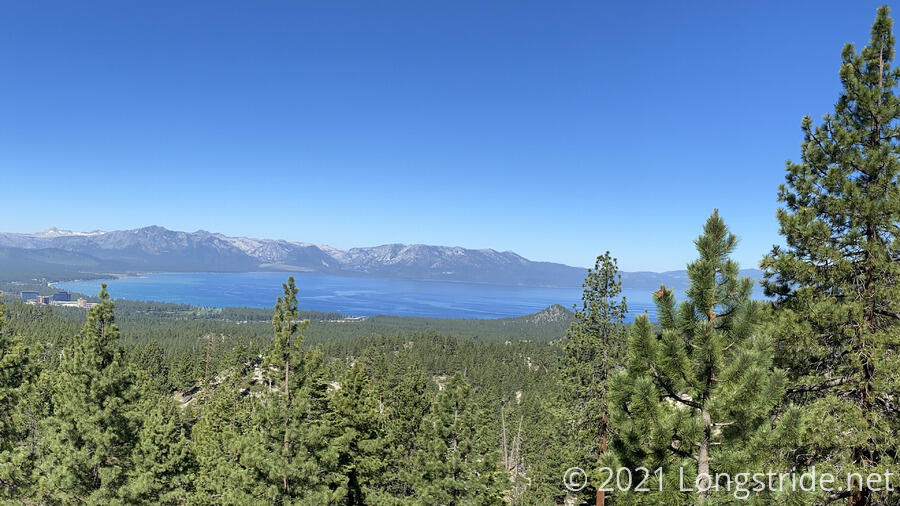 After crossing Kingsbury Grade Road, the trail briefly joined a dirt road. A sewer line ran along the road, and a short section of it was very stinky, even moreso than we were after six days of hiking.

CareFree and I charged up the hill after the road. With the skyscrapers from Stateline occasionally in sight, it was easy to see that we were making clear progress towards town. Around 11:30, we finished our climb up the mountain, stopping to take a break at the junction with the connector trail to the Van Sickle Bi-State Park. I was happy we had completed our climb for the day; CareFree was somewhat apprehensive of the four mile descent to follow into town.

Most of the day, it was hard for me to remember much about the trail or its surroundings, since mentally, I was focused on “We’re almost to town! There’s ice cream and showers and burgers and a bed there!”. But taking the Van Sickle trail into town was a little bit of a treat, since for the first time, we were hiking directly towards Lake Tahoe, rather than around it. Thus, with nearly every step we took, town grew larger and ever-closer.

Somewhat close to town, we passed over a creek with a nice bridge, which seemed to be an attraction for day hikers; there were quite a few at the creek when we arrived, and we passed probably another dozen hikers on our way into town. 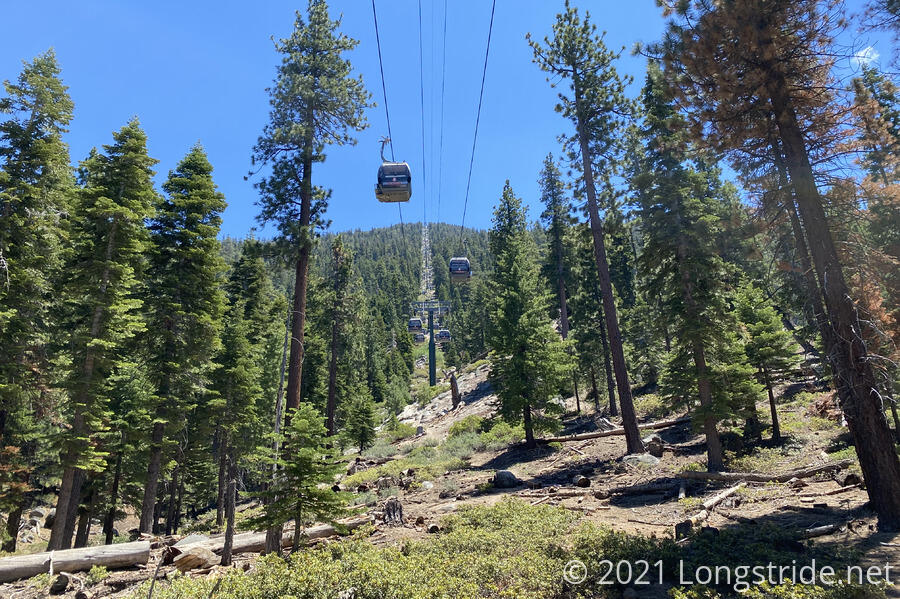 A Ski Gondola Climbs The Mountain — This would have been a much nicer way to ascend or descend the mountain. Too bad it doesn’t go where we are!

Finally, around 1:45, we arrived in Stateline, in the village surrounding the Heavenly Ski Resort. Our first stop was to get ice cream at the Nestlé Toll House Cafe. It was a bit expensive, but every bit worth it after a long hike.

I’d forgotten how many people there would be around Heavenly Village, and the foot (and vehicle) traffic and blaring loud outdoor music was a bit disconcerting after a week in the wilderness.

Our next stop was the Pinewood Inn, where we had booked two nights for now, and also another night later in the week to allow us to split up the remainder of our loop back to Tahoe City into two parts.

We checked in, and upon arriving in our room, we were not happy to find that our room lacked air conditioning. This was a surprise to us, and after showing the manger the room description from the website we had made the booking from, the manager upgraded us for free to a room with AC. (And also a jacuzzi that they asked us to please not use because of insufficient water pressure.)

After a shower and change into town clothes, we felt like brand new hikers. (Well, not entirely: we were very sore. But we felt much better.)

Afterwards, we went out to town and whittled down our list of chores, so we could relax as much as possible tomorrow. Our Desolation Wilderness permit is now printed. Dinner (burgers) at Gunbarrel Tavern was excellent. CareFree picked up a new pair of shoes with a larger toe box, which we hope will make her feet happier. (Amusingly, one of the store’s resident dogs had a merchandise tracker on its collar, to alert staff if the dog wanders outside.) And we went food shopping for the next leg of our hike.

All of today’s hiking and town chores left us exhausted, and we turned into bed early.