Day 9: A Thunderstorm That Was All Roar And No Bite
Location: Willow Creek (91.8 miles)
Tags: California, Nevada, Tahoe Rim Trail

Another rainstorm this evening rinsed off our tent (but fortunately not us), putting the Tahoe Rim Trail in contention with being wetter than my PCT hike through California.

CareFree and I got up shortly after 7 am, and by 8 am, we had finished our last packing and headed towards town to get breakfast, and a bus back to the trailhead.

We got breakfast at Heaven’s Little Cafe, largely because I remembered getting a good breakfast there in 2018. I again got the French toast and a smoothie, both of which were tasty, but not as great as I remember it being. Though, the fact that it wound up being $20 per person (which felt exorbitant for what we were getting), and they had a tasteless sign on the door about how “no one wants to work anymore” may have soured me on the place a bit. If I come back to South Lake Tahoe on a future hike, I will probably avoid that place.

After breakfast, we walked a block and a half to the Stateline Transit Center, and caught a bus to the Kingsbury South trailhead. There was one other hiker also on the bus with us, heading to a different trailhead. The driver let us know that there were afternoon thunderstorms possible today, and seemed reasonably knowledgeable about the Tahoe Rim Trail — he’d hiked parts of it, but not yet the whole thing.

About 20 minutes after we departed the transit center, the bus dropped us off just down the street from the Kingsbury South trailhead; two other hikers, one with a dog, were waiting to get on.

Instead of hiking four miles up via the Van Sickle Connector trails, our bus up the mountain dropped us at a trailhead 0.6 miles off-trail, and 0.8 miles ahead of where we got off-trail on Sunday. It only took us about 35 minutes to get back to where we left off, and we continued our hike clockwise on the Tahoe Rim Trail.

Resuming from where we left off at around 10:30, it was already hot out, and it didn’t take long for us to start sweating.

The trail was relatively busy with hikers this morning. We passed by a group of five out on a day hike; a biker or two; a few trail runners; and half a dozen backpackers, including Captain and Other Side, who also hiked the PCT in 2018.

Just after noon, we passed by a short narrow section of trail that appeared to be cut or blasted out of the rock, featuring a rock wall on one side and a cliff on the other. It somewhat reminded me of the Kendall Katwalk on the PCT in Washington, a more impressive example of similar trail design. 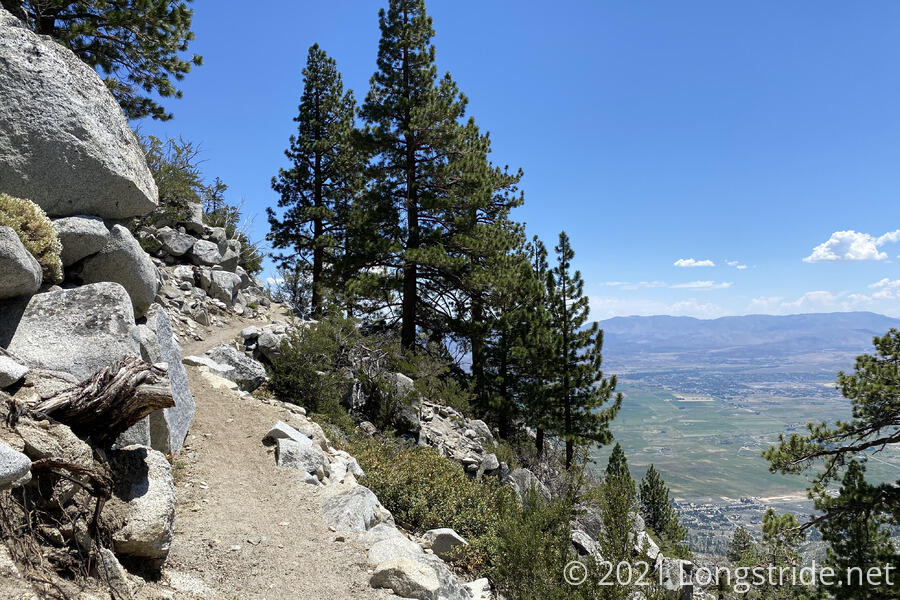 Narrow Cliffside Trail — A short and narrow section of trail cut out of the rock.

Shortly after, we passed a creek; five hikers we saw at Gray Lake were there collecting water. Coming from town and only a few miles in, we had enough water to get us to Star Lake, where we planned to cook dinner tonight. Ready for a break, though, we continued a short distance up the trail and sat down in the shade next to a large rock. A cool breeze blew, helping us relax. With a relatively short distance planned for today, we took a much longer break than we normally would have, nearly an hour.

As we continued, the view to the east opened up, giving us a nice view of the valley. The trail also passed by a very large (both in girth and height) tree, and, we passed the Nevada-California border again, returning us to California along the trail.

The thunderstorm predicted by our bus driver this morning started to brew in the distance, with clouds forming over the mountains to the south: exactly the direction we were hiking in. I hoped that the height of the mountains (and in particular, Freel Peak, which is the highest point in the Carson Range), would keep the clouds away from us, at least for today. The winds picked up as the afternoon progressed and we got closer to the storm clouds. 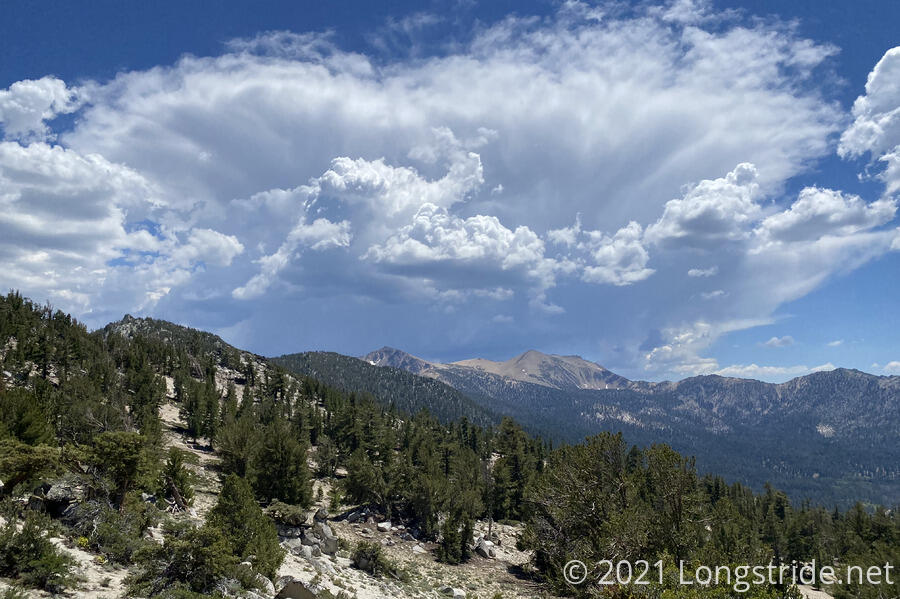 Our next stop was at Star Lake, a rather picturesque (and very clear) lake high up in the mountains. We stopped for water and dinner there, shortly before 4 pm, which also gave us a chance to reevaluate our plan for the day.

Although lots of hikers camp near Star Lake (it has a fair number of campsites, and is an obvious choice since there’s water), we expected to go a little further, camping on a saddle on Freel that would take us past the mountain. That would give us a campsite with a great view, we hoped, and also make it easy to take the trail up to the summit, which would finally put me on top of a mountain higher than Mt. San Jacinto (though only by 40 feet). 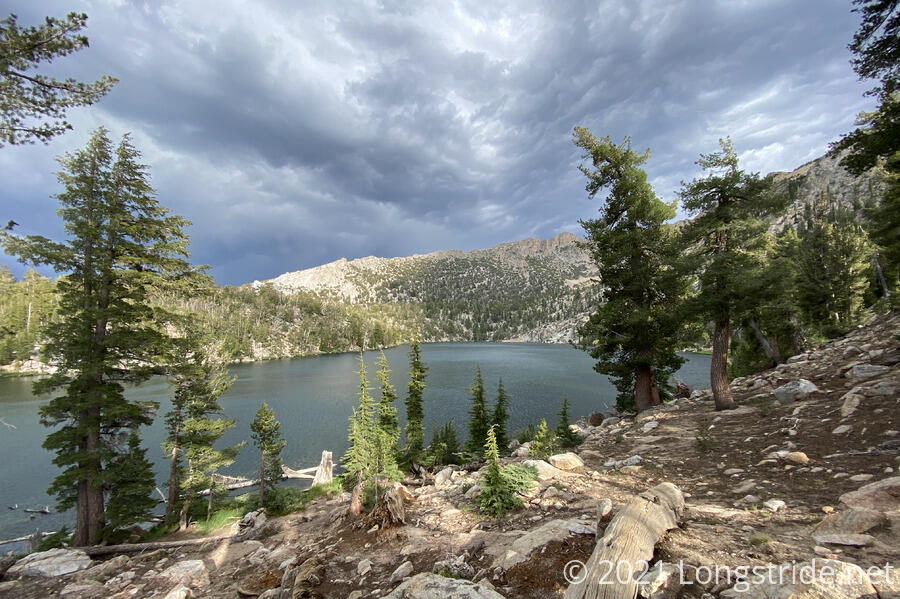 With rain clouds looking not amazing, we amended our plan: rather than stopping at the saddle, we’d go to the next creek and campsites past Star Lake, and see if the clouds improved by then. A little over a mile later, they hadn’t, and with random raindrops falling, we opted to set up our tent nestled in some trees for wind protection.

Thunder started as we started to set up the tent, and the wind picked up a little, and it started cooling off, but it took almost 40 minutes for the rain to really start in earnest.

It didn’t rain too hard or too long; the wind was the bigger nuisance, but even that only lasted for about an hour. There was lots of thunder, but we didn’t see much lightning. After the storm, the sky cleared a little, and the clouds in the distance made for a colorful sky.

Campsite After The Storm — Our campsite after the wind and rain passed. The mountain On the right is Freel Peak, highest point in there Carson Range.

Tomorrow: we’ll probably try for Freel Peak, and then do our longest day yet.