Our third day on trail was a long slow climb, part of one of the longest uphill stretches on the Tahoe Rim Trail.

CareFree and I slept in a little later than yesterday, not getting up until almost 7. Once we were up, though, we were fairly efficient, and still managed to leave camp before 8 am.

Yesterday, we started an uphill climb, from the Brockway Summit Trailhead (where we were considering going into Kings Beach), and continuing through tomorrow when we summit Relay Peak, the highest point on the Tahoe Rim Trail. That meant that almost all of today was going to be uphill. And very exposed to the sun.

Early in the day we passed by a rather extensive meadow of Mules Ears. It was one of the longest meadows I’ve ever seen on trail, and it seemed like it was a couple miles long. (Though maybe it only seemed that way because we were continuing to hike rather slowly.) 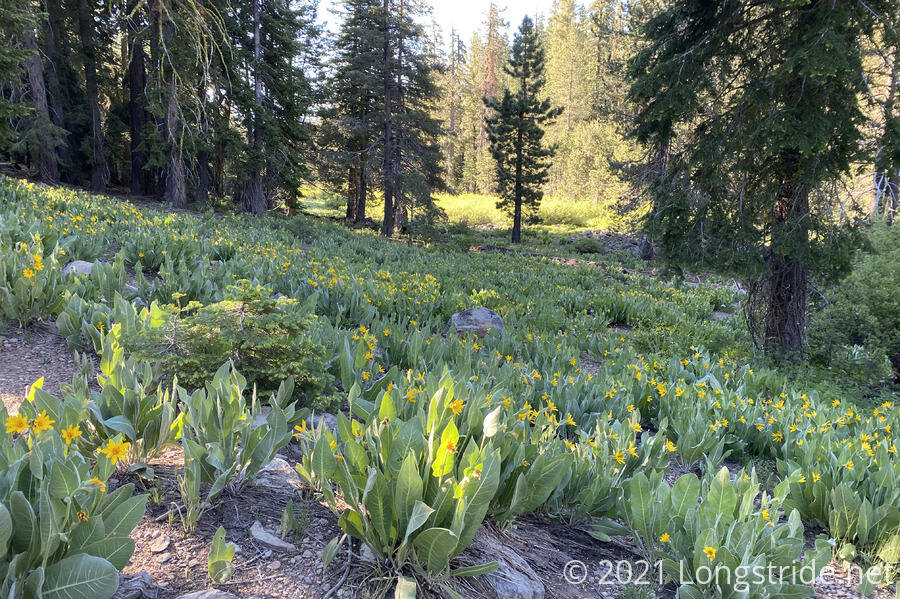 Mules Ear — A meadow of small plants in the sunflower family.

Along the way, we passed Chesapeake, also thru-hiking the Tahoe Rim Trail, going counterclockwise to our clockwise. It turned out that we had a surprising amount in common: she’d previously hiked the Appalachian Trail, in 2015, a year before me; she was also from Maryland, and went to the same university as I; and she is a teacher (like CareFree).

A short while later, we passed by two other hikers, who had previously thru-hiked the TRT, but were doing a short section to prep for the John Muir Trail, located further south in the High Sierra (between Yosemite and Mount Whitney, mostly following the Pacific Crest Trail).

Mid-morning brought us to the California-Nevada border. We will be in Nevada for the next several days, until shortly after we leave South Lake Tahoe. We stopped for a snack, a little earlier than we had planned. I checked the weather forecast, and got a warning of thunderstorms tomorrow, near Reno.

Shortly after the state line, we reached a side trail to Mt. Baldy, which we climbed because it was less than 0.2 miles off trail (and it was still relatively early in the day, and we weren’t planning on hiking too far today). At the top, we were rewarded with our best view of Lake Tahoe so far. From our vantage point, we could see the deep blue color of the deeper portions of the lake quite contrasted with the light blue color of the water along the beach of Crystal Bay, outside of Incline Village. We could also see someone parasailing, and a helicopter flying over the lake.

Now entering the Mount Rose Wilderness, another mile brought us to the otherwise unnamed Peak 9499. CareFree opted to remain at the trailhead, while I made the 15-minute round trip. About 200 feet higher then Mt. Baldy, it provided an even better view of the lake. 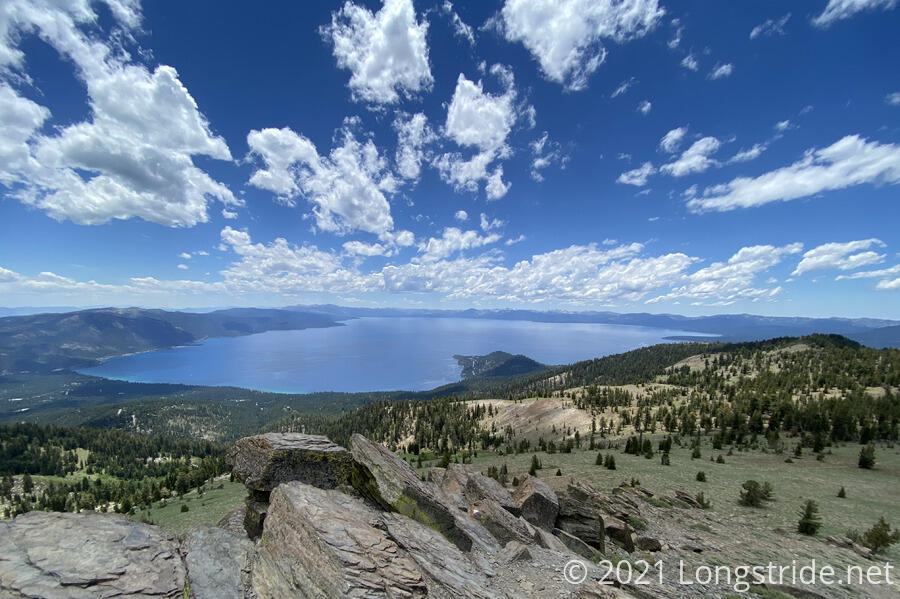 As the day progressed, clouds began appearing on the horizon; and occasionally drifted overhead. It made for a nice break to the otherwise completely blue sky, but the clouds did very little to blot out the sun where we were, so we were still taking the full brunt of the sun’s rays as we continued our uphill climb.

Our next stop, half a mile off trail, was Gray Lake. Whoever built the trail going to the lake from the west (the direction we were coming from) had lots of fun building it: it was one of the most windy sections of trail I’ve ever hiked. Along the way, we passed by the first snow we’ve seen near the trail. Some of it almost — but not quite — touched the trail. We also passed a four horse train with three riders and a dog.

The trail split into a loop going around the lake; we took the longer route leading to the inlet, which would have better (cooler, and cleaner) water. From a distance, we could see a nice meadow, with Gray Lake in its center, pollen-covered and unappetizing.

The inlet, though, took on an almost idyllic quality. Cold, clear water flowed down two small cascades, collecting in a channel cut through the grass, with large stepping stones to make crossing easy. 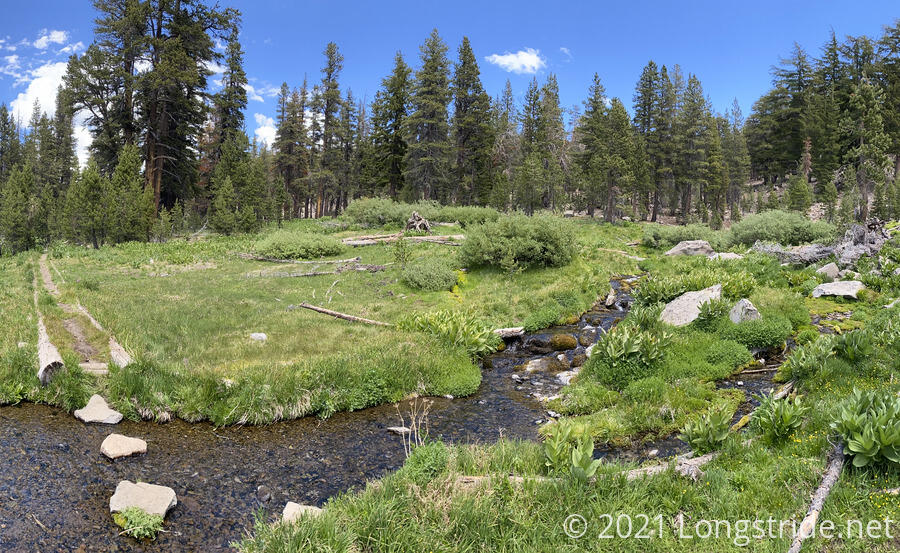 If there had been a bit more shade, it would have been a perfect spot to cook dinner. But, cook dinner we did, even though it was only 2 pm. A large cloud ambled by, blocking the sun for a few minutes, but it didn’t stay long enough.

After a somewhat restful two-and-a-half hour break, we continued on, continuing to follow the Gray Lake trail up a rather steep climb to exit the lake’s basin and reconnect to the Tahoe Rim Trail a little bit ahead of where we departed, preventing us from having to backtrack.

The clouds continued to blow in, and it looked like rain out in the distance. 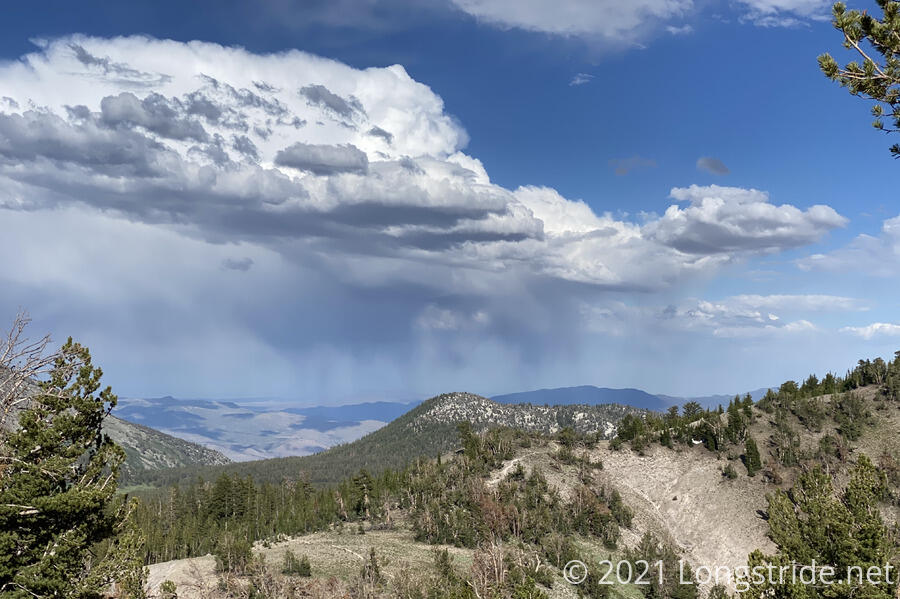 Rain in the Distance

That rest didn’t really prevent us from being tired, and we only made it another mile and a half, continuing the climb towards Relay Peak and camping just off-trail in a somewhat wind-sheltered bowl. In terms of distance, it was a somewhat disappointing 9.6 miles, but I’m not sure we would have been well served to try and push further. We were tired, and campsites over the next several miles seem unlikely given our topographic map. Also, the further we went, the higher up we would get, which would make it colder, and bring higher winds as well. And given we’d already seen rain clouds and a thunderstorm warning for tomorrow, not going further than we did seemed smart.

When setting up my tent, curiously, I found a hair band wrapped around the top of one of my trekking poles. It definitely wasn’t there this morning, and I have no idea where I could have picked it up. Just one of life’s little mysteries.

Tomorrow will be one more stretch of uphill to summit Relay Peak, and then mostly downhill for the rest of the day. We’re planning about 14 miles to make up for today’s shortfall.