Today, we planned on a 20 mile day, which would allow us a short 6 mile day into the Mountain Harbour hostel tomorrow. Later, we realized our plan to Bradley Gap was only 18 miles, because math is hard. (Actually, we confused Little Hump Mountain with Hump Mountain.)

Just 3.5 miles into our day, literally as we were putting our packs back on from a snack break at Hughes Gap, just before the long climb up Roan Mountain, trail magic appeared. Kansas, who thru-hiked last year, and her daughter, showed up with chairs, candy, sodas, chips, cupcakes, brownies, carrots, giant pickles, and, most impressive of all: pulled-pork sandwiches.

We agonized over the decision to stay or go for about two seconds, before taking our packs back off, helping to set up (by mostly staying out of the way), and sat down and ate lots of food.

Roan Mountain presented a long uphill to a bald that was the former site of Cloudland Hotel, which was dismantled after the business failed. Only portions of the fireplace and foundation remain.

The downhill from the summit was clearly a former road used for the hotel, and was made of innumerable stones large enough to make walking over it a laboriously tedious and foot-punishing downhill.

Once I reached the bottom, at the parking area at Carvers Gap, a woman almost immediately offered me a banana and orange. (Thanks!) 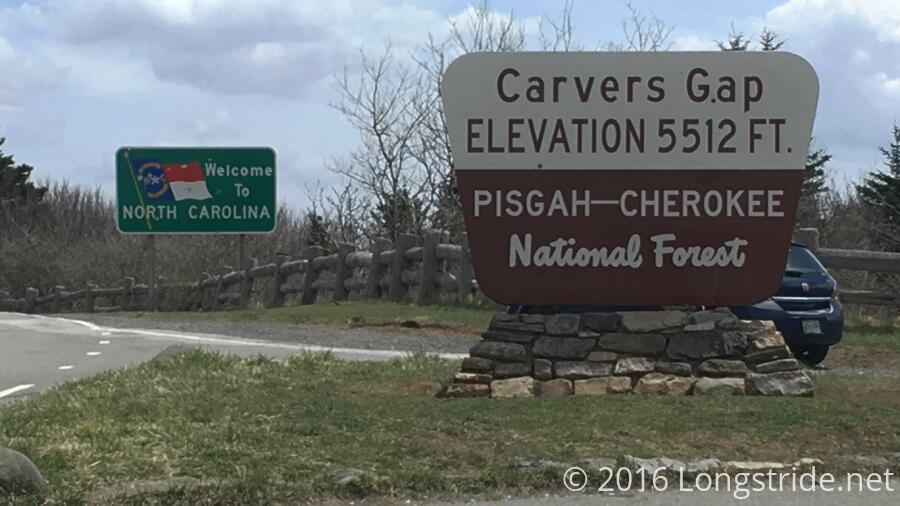 Carvers Gap — Welcome to North Carolina. Yet another reminder that the trail travels right along the North Carolina/Tennessee border.

Beast, who had been ahead of me since leaving Hughes Gap, took a short break at the highest shelter on the AT, Roan High Knob Shelter, and arrived at Carvers Gap about 10 - 15 minutes after I did.

As he was coming down the trail to the gap, I was talking with another couple, Nerry and Laura, who had just arrived, and had some leftover food they wanted to share with hikers. (Their son had attempted a thru-hike two years ago.) They gave us both a bottle of water, and I got a turkey sandwich with apple butter, and Beast got a banana and a turkey sandwich with salsa and chips. (Thanks again!!)

Also, while we were there, a day-hiker with three dogs gave us a bag of oat clusters (which were very tasty, but we didn't want to carry almost an extra pound of weight, so we had some and left the bag in view of the trail for the next hikers to come through).

Immediately upon leaving Carvers Gap, the trail took us up Round Bald, providing great views of the surrounding area, and one of the few trail markers that indicated direction of travel.

View from Round Bald 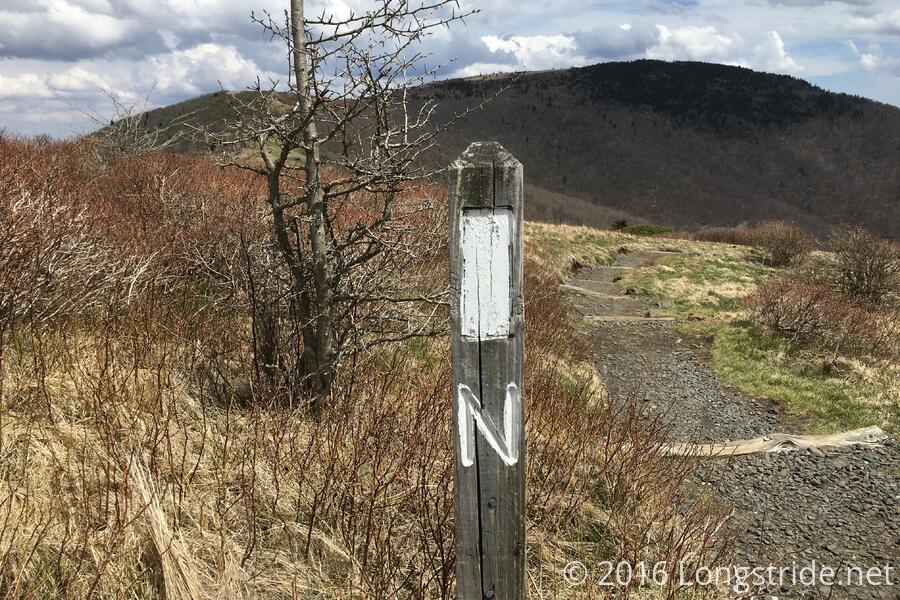 Late in the afternoon, we approached the Overmountain Shelter, a converted barn located just off the AT, near where the trail crosses the Overmountain Victory National Historic Trail. Easily the largest shelter on the trail so far, it claims to sleep 20. Nestled at the top of a valley formed by two adjoining mountains, it has a great view of the vale below.

Side Trail to Overmountain Shelter — The shelter, a converted barn, is at the end of the trail on the right. To the far right, a kite is stuck in the trees. 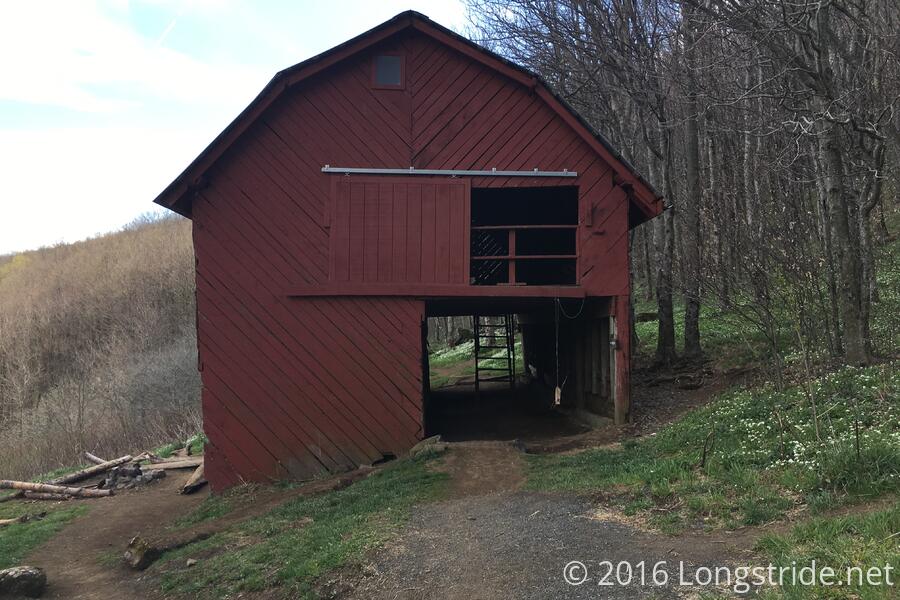 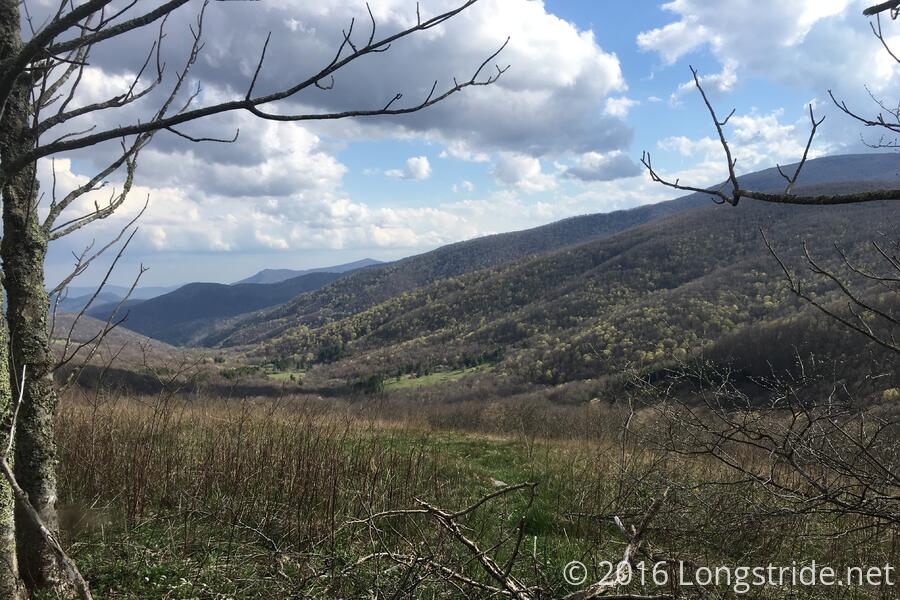 View of Valley from Little Mountain Gap — Overmountain Shelter, barely visible, is in the clearing in the distance in the right-center.

The last climb of the day was up Little Hump Mountain, another bald that ended with the trail entering an almost foreboding forest and winding its way down the mountain. 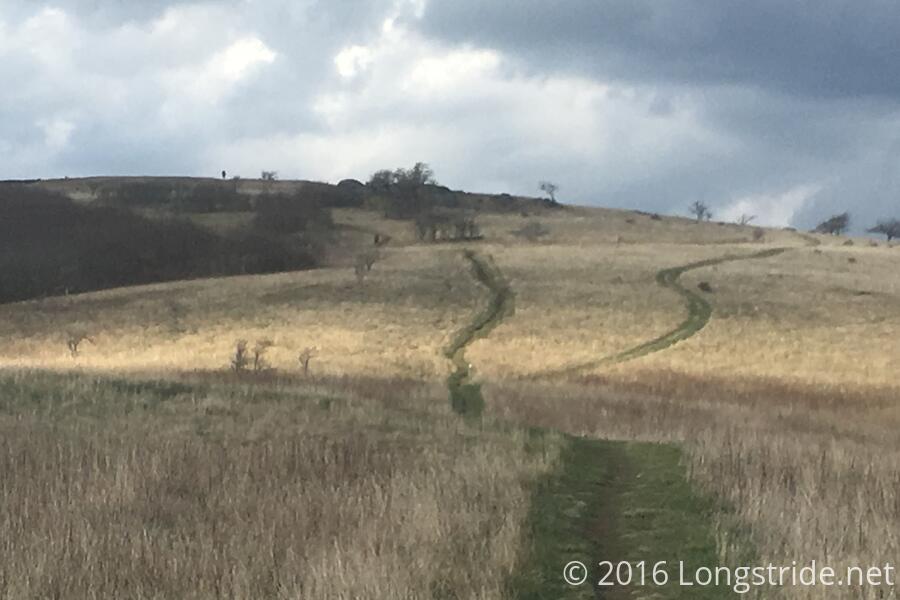 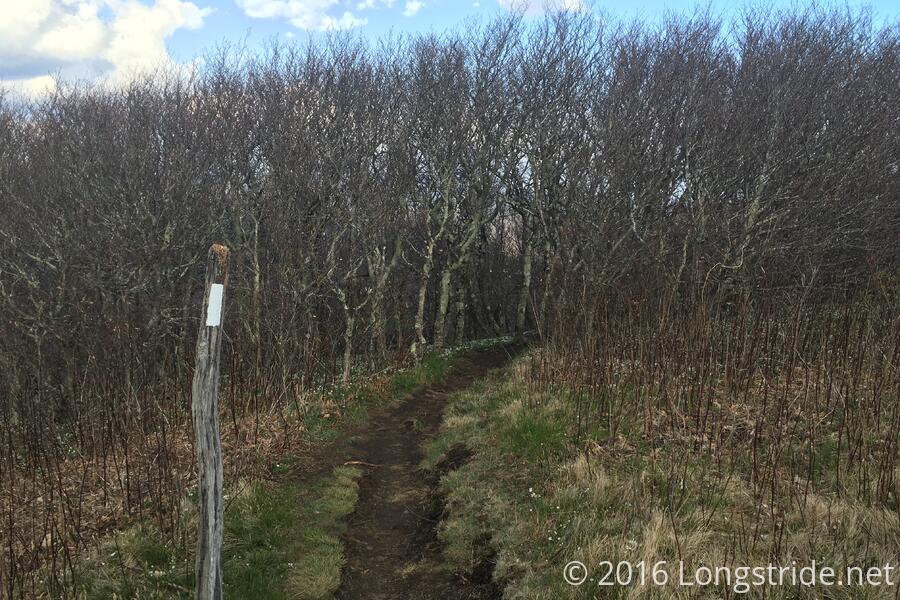 Our day greatly lengthened by the multiple doses of trail magic, we ended our day late, at almost 7 pm, at a campsite a mile or so short of our planned destination. Sassy had already gotten there and set up her hammock about an hour before we arrived, and we all chatted as Beast and I set up our tents and made dinner.