Today was our final day on the Benton MacKaye Trail. Nearly 300 miles of hiking brought us from Springer Mountain, in Georgia, to the Baxter Creek Trailhead in the Great Smoky Mountains in North Carolina.

CareFree and I got up very shortly after 6 and began quietly packing up so as not to disturb the other people sleeping at the shelter. Because we stayed at a shelter (and thus didn’t need to set up or take down our tent), we should have saved a bit of time. However, we didn’t begin today’s hike any quicker than other days; dancing around having to get back into the still-wet clothes we hung on clotheslines probably didn’t help. (I’m not sure our clothes dried any overnight; if anything, they got wetter, especially the socks.)

Shortly before we left, the sun rose over the nearby ridge, lighting up the nearby forest and illuminating the dust and mist in the air. It was perfect scenery to walk off into, even if it meant we would soon be dripping in sweat. 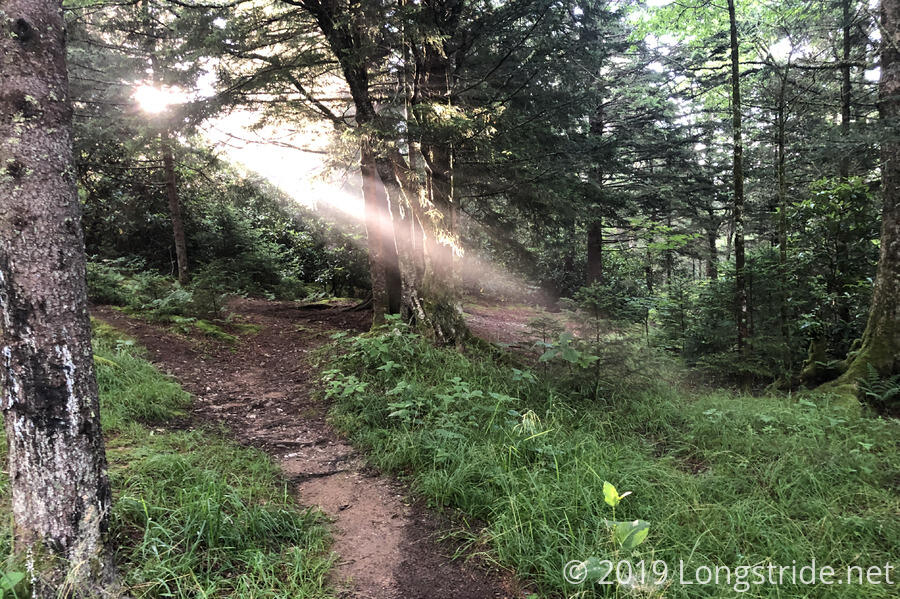 The sun illuminates the forest shortly after sunrise.

After gently bouncing along the pine-forested ridge for several miles, we at last came to the final steep climb of the Benton MacKaye Trail. In just over two hours, the trail brought us to the fire tower on Mount Sterling, the highest point on the BMT, at 5,842 ft.

I climbed up the fire tower to find one of the best views we’ve had on the BMT. Layers of lush green mountain ridges spanned our in all directions, gradually becoming fuzzier in the distance in the haze of the Blue Ridge. Clouds filled the sky, some grazing the tops of nearby peaks.

I’d planned to have a snack in the fire tower, but it was a bit smaller than I was expecting, so I climbed down and ate on the ground. While there, CareFree and I chatted with a family — a dad and two young daughters — who were out on a several day backpacking trip.

After a long break at the trail’s summit, we headed down the Baxter Creek Trail, heading for the BMT’s terminus. On our way down, we passed three groups of hikers, seven in total, heading up the mountain. It was a largely uneventful hike, with only a few downed trees we needed to work around. Aside from a few areas where the trail was especially rocky or roots, it was an easy, though steep hike off Mount Sterling.

The hike down the mountain was bittersweet. As we dropped 4,200 feet down to the trailhead, the forest changed back to deciduous from pine one last time, eventually joining Baxter Creek, and then, Big Creek. 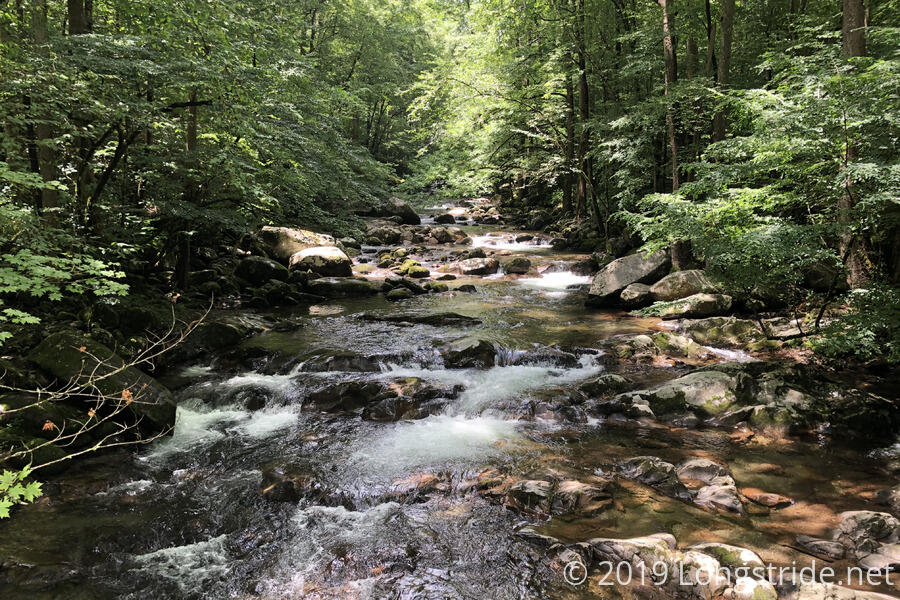 Around 12:45, we crossed a bridge over Big Creek, completing our hike of the Benton MacKaye trail. We were disappointed there was no terminus sign, just the Baxter Creek Trail sign with a BMT marker that had been common in the Smokies. 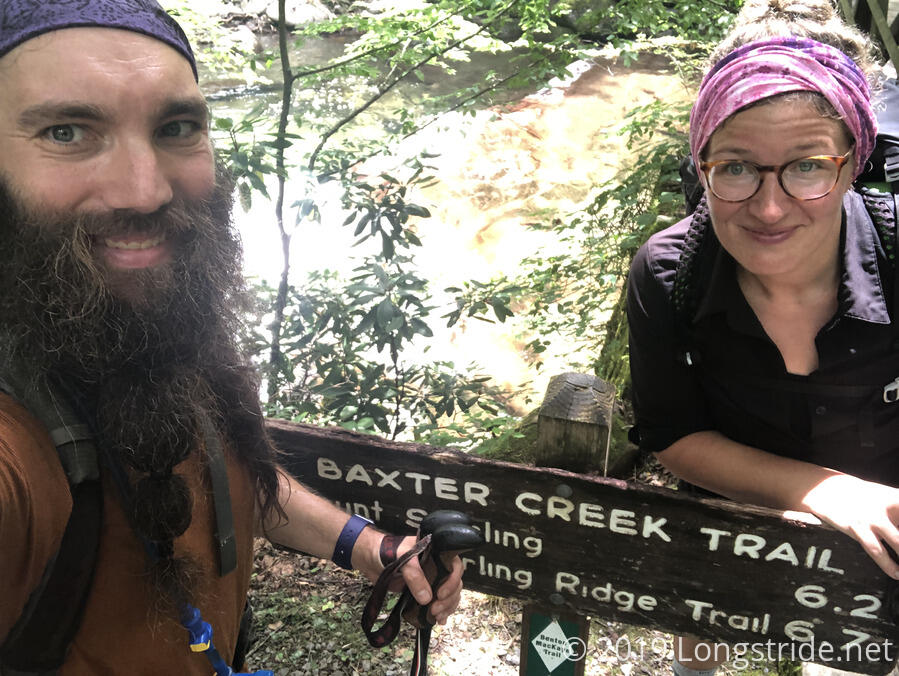 The trailhead is located in the Big Creek picnic area, which has a number of picnic tables and a restroom (with soap and running water!). We took the opportunity to wash in the restroom, and then took a long break at one of the picnic tables, sitting down on the other end of a long table with another hiker preparing to head out for a hike. I set out all of my wet socks, hoping that they’d dry some before we left the park. (They did, at least a little.)

There were also bear-proof trash bins at the picnic area. I briefly considered the idea of hanging onto my trash so I could weigh how much a week’s worth of it actually weighed. Thankfully, I didn’t entertain that idea for long, and threw out my trash (and the broken sunglasses I’d been carting around for the past few days). I’m glad I did; with the trash gone, my pack felt surprisingly lighter.

We left the picnic area a little before 2, walking down the road to the park’s border to return to my car, which we left at Standing Bear Farm Hostel. A mile of roadwalk brought us to our exit of the Smokies. One final BMT trail marker pointed the way to the trail. After exiting the park, we followed Waterville Rd north, passing by the Walters Dam hydroelectric power plant on the Pigeon River. The road then turned west, paralleling the river, until we left the road to briefly join the Appalachian Trail. We followed the AT across a bridge over the river, and then along Green Corner Road to pass under I-40, departing the AT where it re-entered the forest, instead following the road the rest of the way to the hostel. We got there just before 3 pm, to the sound of thunder rumbling in the distance.

Our arrival at Standing Bear brought our hike of the Benton MacKaye trail to a close; it was now time to return home.

We drove to nearby Newport, TN for an early dinner (apparently having worked up quite an appetite today), and set off for home. With a long drive ahead of us, we stopped for the day in Bristol, VA, giving us a chance to rest and relax this evening.

Tomorrow, we’ll continue our road trip home, heading to Buena Vista, VA to return to the Blue Ridge Parkway, continuing our tour of the BRP and Skyline Drive that we started in May after we last left the trail.

With my completion of the Benton MacKaye Trail, I’ve now completed two major and two shorter long-distance trails since 2016, for a total of just over 5400 miles. Of course, there’s still many more trails to hike, but for now, it’s time to rest.