About six months ago, I completed my hike of the Benton MacKaye Trail, my fourth long-distance thru-hike. While on the shorter side as long-distance trails ago, the BMT was not without its challenges, and I wasn’t really sure what I wanted to say about that experience until recently.

The Benton MacKaye Trail, In Reflection

My partner, CareFree, and I, began the BMT on a brisk spring morning, starting from the AT Approach Trail in Amicalola Falls State Park in Georgia. It was my second time at Amicalola, a little over three years after I was last there to begin my Appalachian Trail thru-hike. The slightly later season made for a much greener trail, and it was a great treat for me to revisit the start of my AT hike with slightly different scenery. And while I did recognize parts of the approach trail, quite a bit of it looked different enough that I didn’t recognize it at all. (Though, that’s hardly surprising to not remember in great detail the first nine miles of a 2200-mile hike!) 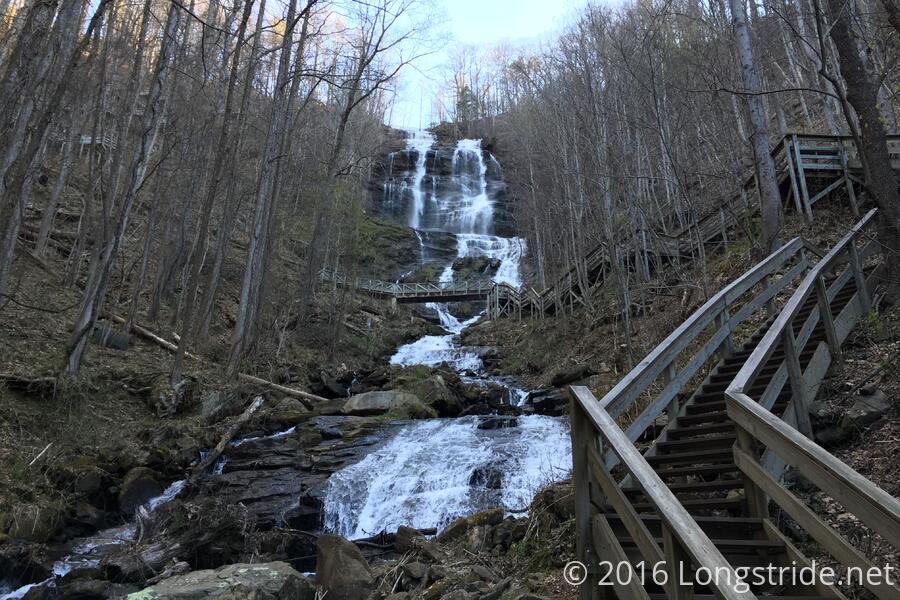 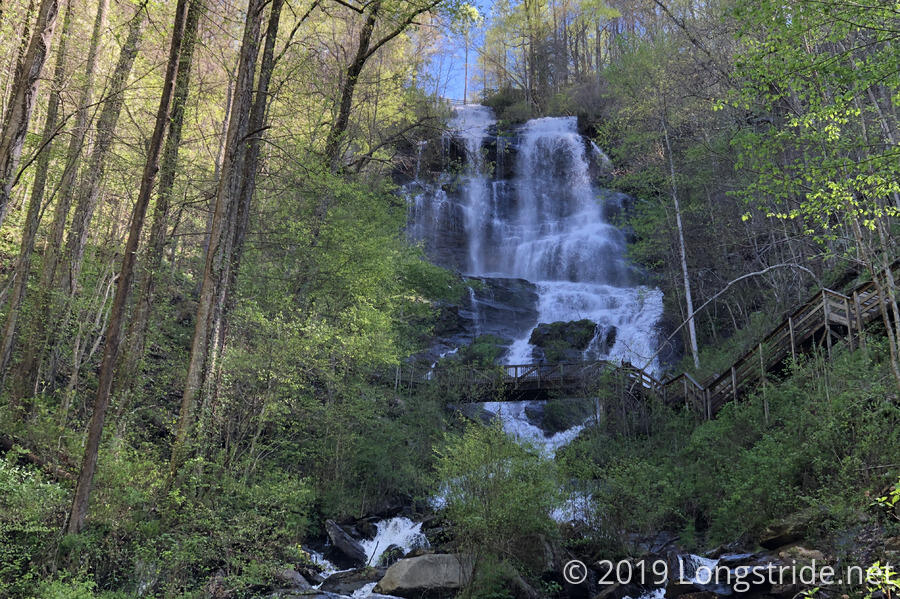 The BMT quickly diverged from the AT, both in direction and in character, as it set a course westward through Georgia. And while the BMT is a wilderness trail, sometimes that was hard to tell. The first few days had more road crossings — and roadwalks! — than I expected. A long (and at times, unsafe) roadwalk on Day 4 was followed up by roadwalks on Day 5 and Day 6 outside of Blue Ridge, and this made those three days my least favorite days of hiking. It wasn’t really what I’d signed up for with a wilderness trail, especially one as short as the BMT. As a percentage of its length, the BMT almost certainly has more roadwalking than the AT, Long Trail, and Pacific Crest Trail, the latter of which has no shortage of (mostly dirt) road walks.

And, while the AT is a well-trafficked trail, the BMT is not, and that difference was quite notable. We were told by a ridge runner on our first day that we probably wouldn’t see anyone, and that was mostly true. While hiking, we rarely saw anyone else. Most nights on the trail, we camped by ourselves. The solitude was quite a welcome difference from the other trails I’ve hiked, even if it meant the campsites were less developed.

As with the AT, eight days was enough to hike through Georgia. Importantly for the BMT, the exit from Georgia brought with it a substantial change to the trail’s character. Tennessee welcomed us with an incredibly steep (for the BMT) climb up Big Frog Mountain. With it, the trail’s quality of maintenance greatly degraded, as the Tennessee chapter of the BMTA doesn’t have nearly as much support (in terms of volunteers on work crews) as the Georgia chapter.

The views also lessened. There were occasional views to the distance in the early days on the trail, but the further north we got, these diminished, as trees grew leaves and the trail went through more forested (or more towned) terrain.

Then, I hurt my back, probably from a combination of tripping over a branch and not taking a recovery zero in the first week. (We really should have zeroed when we got to Blue Ridge on our fifth day, which would have had us better rested, and thus, in better physical shape, especially since we weren’t really in trail shape when we started.)

A few more days of painful hiking, an unexpected triple-zero, and what seemed like a recovery followed by another day and a half of painful hiking resulted in an unhappy decision to depart from the trail and head home, in hope that more recovery time would help out.

That led to its own separate adventure, but a month and a half of recovery (and some physical therapy that, overly simplified, boiled down to: stretch more!) brought us back to where we left off.

Nearly two months changed the trail significantly. Now late June, ticks were out in force (especially in the Smokies), and on the days we were near Fontana Lake, we were constantly picking them off our legs. Worse, there was a lot of overgrown trail, some of which was so bad that we were bushwhacking through plants nearly as tall as we were.

In the the Smokies, rarely was there any significant view that didn’t involve Fontana Lake. (This is not surprising, since the BMT follows the lake for about 30 miles.) The early summer season brought plenty of leaf cover, hiding what few views there were as the trail traversed lengthy creek valleys. Finally, the trail peaked (literally) on Mount Sterling on our last day on trail, with incredible views from the mountain’s fire tower, the perfect way to end a hike.

There were far fewer views on the Benton MacKaye Trail than there were on the AT, especially, in Tennessee and North Carolina. I think this is because the BMT is generally lower in elevation than the AT; it doesn’t really follow a high ridge, so there was much less of an opportunity to see views out in the distance.

If “big views” are what you consider makes a trail beautiful, then by that definition, the BMT is not a beautiful trail. Hiking through trail so overgrown you can’t even seen the trail certainly does put a damper on things, as does the relative lack of locations that provide overlooks. But views aren’t the only thing that make trails beautiful.

On a day in the first leg of my hike, after I’d hurt my back and we were hiking through a somewhat muddy section of trail, mostly out of frustration, I’d complained about there being a lack of views and that the trail didn’t seem all that beautiful. Of course, I was being momentarily myopic; neglecting to take into account the beauty in the river raging past, just out of eyeshot.

The BMT has a much closer relationship with water than the AT. Sure, the AT is fairly wet, and crosses many streams and rivers, but the BMT follows water in a way the AT generally doesn’t. The BMT crosses the Toccoa River three times (twice in Georgia, and once in Tennessee as the Ocoee River); crosses and follows the Hiwassee river for about 8 miles; crosses the Tellico River; and then in the Smokies, generally follows within sight of Fontana Lake for 25 - 30 miles. Once the BMT left the lake, it followed three different creek valleys through the rest of the park, only grudgingly reaching a ridge in the last day before reaching Mount Sterling. 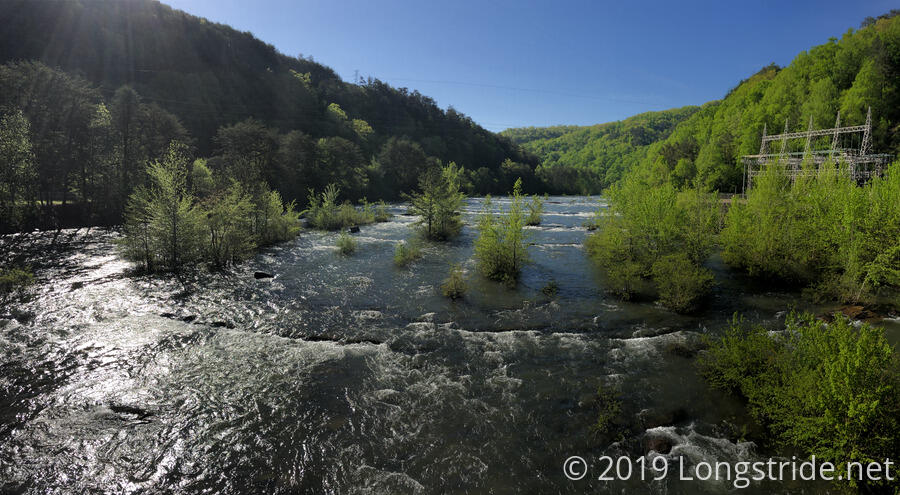 Ocoee River — Also known as the Toccoa River in Georgia.

Rapids on the Hiwassee River 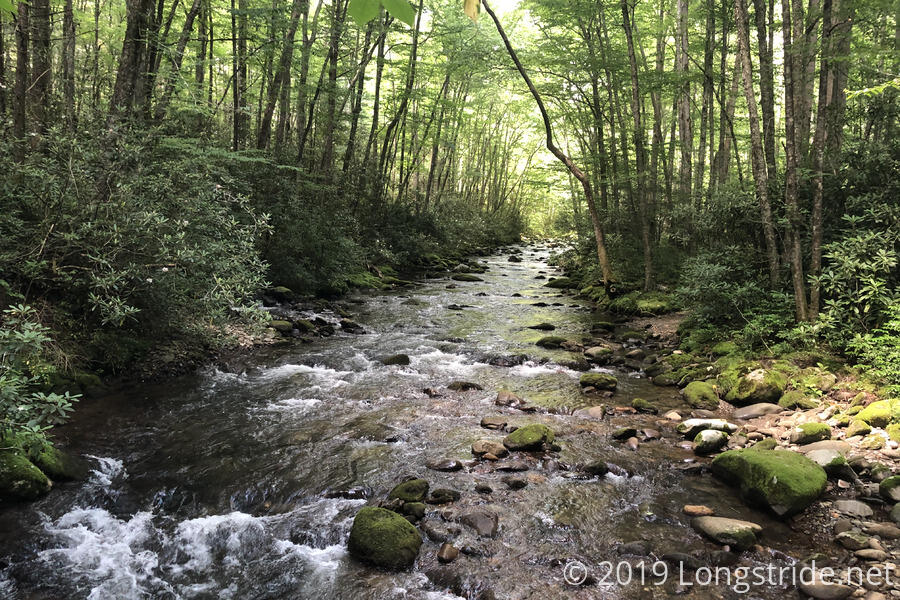 Water isn’t the only thing the BMT has in abundance. If you took the time to look, the trail was full of animal life. Snail shells adorned the trail. Millipedes marched by. Crayfish skittered along. Snakes slithered. Butterflies perched on leaves (or salt-covered trekking poles). Deer foraged for food. The occasional bear fled in terror. There was one incident where a very large rattlesnake insisted it wasn’t going to give up its place in the middle of the trail. Several nights, we heard birds or other animals in a way I generally didn’t on the other trails I’ve hiked. 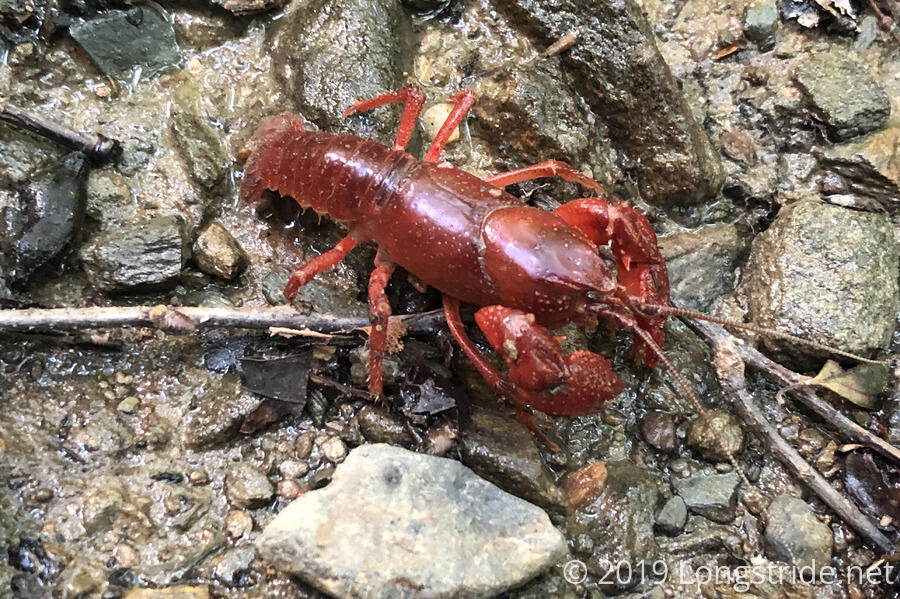 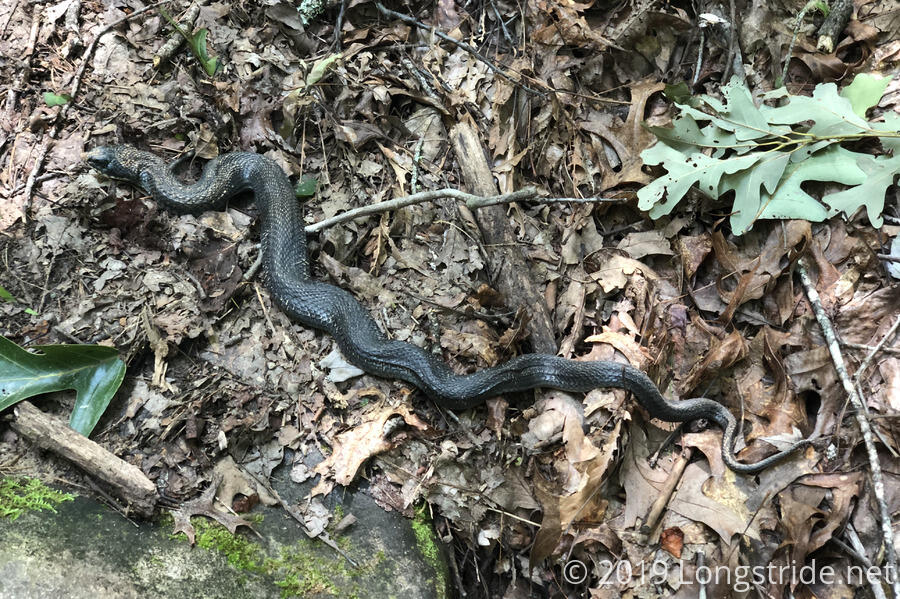 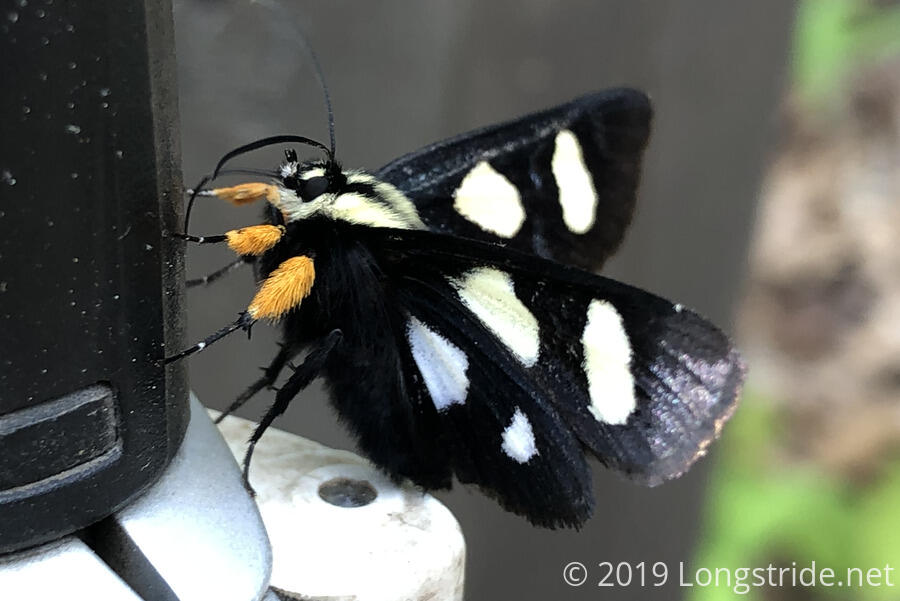 Butterfly on a Trekking Pole 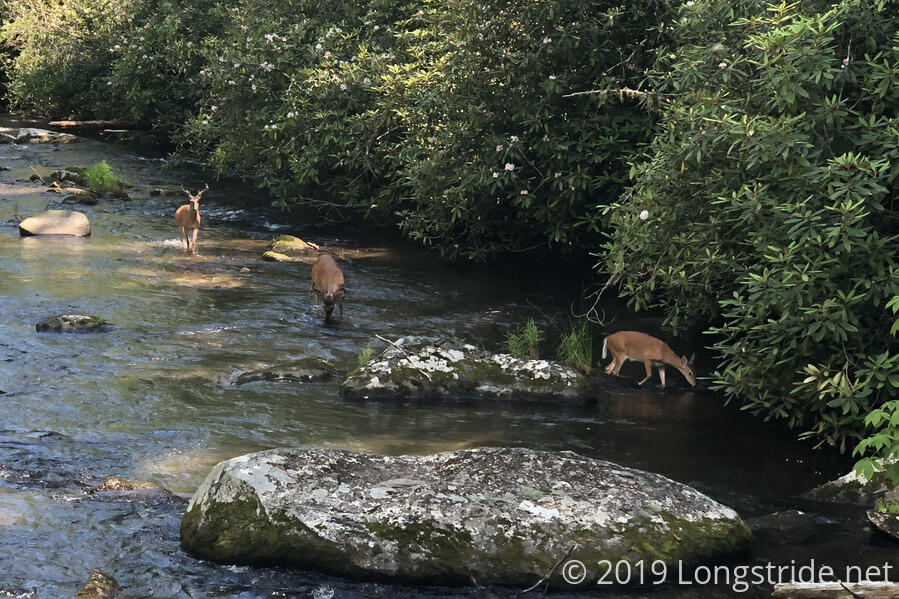 And, of course, there were lots of other things to look at. Waterfalls in particular come to mind. An odd patch of snow in the shade in late April. Our early spring hike gave us no small number of flowers. In several places, old chimneys and remnants of long-destroyed buildings were within sight of the trail. In the southern half of the Smokies, the trail followed what used to be a road, and rusted-out husks of cars sat beside the trail, long abandoned since towns were flooded by the forming of Fontana Lake. Even the overgrown trail had its own charm, with bright pink flowers adding color to the sea of green (not to mention, the sheer absurdity of the situation). On a stretch of trail that was practically paved in horse manure, swarms of butterflies flitted about the droppings, preparing for the next generation of butterflies.

The Benton MacKaye Trail may lack the grandiose beauty of the AT’s Whites or the PCT’s Sierra Nevada, but it has its own charm with all the little things. And while I don’t expect I’ll revisit the BMT anytime soon, I’ve still seen and done things on that trail that I haven’t anywhere else, and it’ll always serve as a reminder to seek out the beauty in the little things.