After a restful sleep, I left camp just before 7 am, and began the climb up Stratton Mountain. As I remembered, it was a long and, in parts, steep climb. While the cool morning air was still somewhat humid, the trail itself was noticeably drier than it had been on previous days.

I reached the summit of Stratton Mountain after about two hours of hiking, stepping over a small snake that was slithering across the trail at the entrance to the summit clearing. The view from the observation tower at the summit was, as expected, terrific. Some low clouds and fog in the distance made the mountains and lakes somewhat hazy, but it was still clear enough to envision what inspired James Taylor to propose the creation of the Long Trail, and Benton MacKaye to work to create the Appalachian Trail. 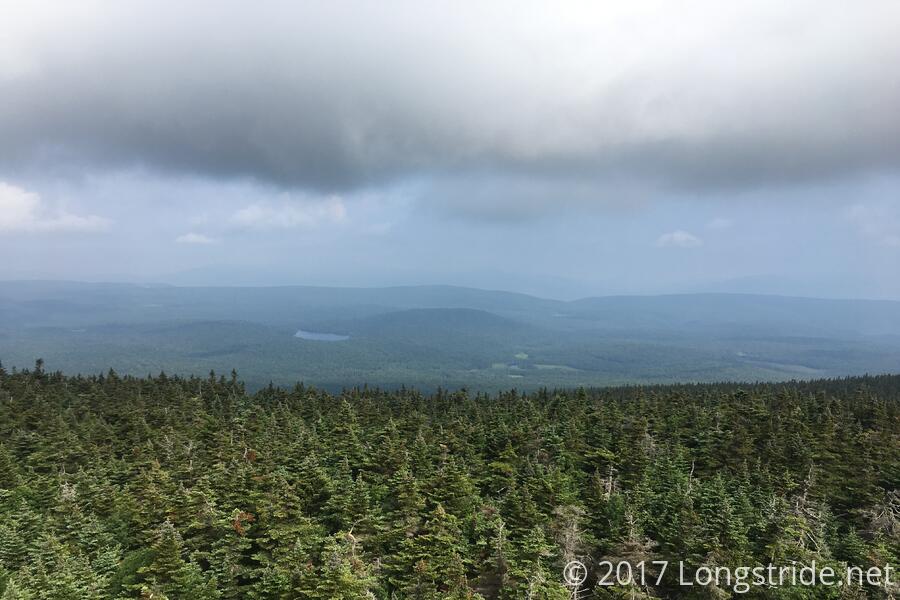 My ankle was feeling better from after I rolled it two days ago, and though it wasn't back up to full strength and I wasn't back up to full speed, I still felt good about making it the 17.5 miles to VT 11/30 and getting into Manchester Center tonight. However, about a mile or so into my descent down Stratton, I rolled the ankle again, badly enough that I had to stop, take my pack off, and sit down almost immediately.

Planner, an AT thru-hiker who stayed at a campsite near mine yesterday with her hiking partner Second Workout, had passed me a few minutes before, heard me should out in pain, and came back to investigate. I assured her I'd be fine after a few moments rest, though I wasn't above accepting an offer of some ibuprofen, and she continued on ahead.

I hobbled on, and made it the shelter shortly after 11, which seemed to me like a rather impressive pace given how much my ankle hurt. Not five minutes after I got there, Supe also arrived. (He left camp after I did, and has generally been a slower hiker, so that's telling about how slow I was hobbling down Stratton's north side.)

I stayed at Stratton Pond over an hour, laying down for awhile to rest my foot, and mulled my options. One was to just stay at Stratton Pond, which would put me back on the schedule I had before I added a zero to hike Equinox Mountain tomorrow. But, since it was still very early in the day, I also didn't want to sit around doing nothing all afternoon. Either way, I decided I wasn't going to push all the way to town; that would take too much time, and put too much pressure on my foot to perform.

I decided to push ahead, to the next shelter on the trail, the William B. Douglas Shelter, about five miles ahead. Once there, I could re-evaluate whether to stay there, or to push on to the Spruce Peak Shelter, another 3 miles further down the trail.

Making slow but steady progress down the mountain, and through the Lye Brook Wilderness Area, I made it to the side trail for the Douglas Shelter. Unfortunately, the shelter was half a mile down the trail (further than I'd prefer to go to a shelter in any case), and I had just run out of water again. I mulled my options: stay at the shelter (and have an extra half mile to go tomorrow), or push on to the next shelter (3.7 miles ahead). In-between was Prospect Rock, which would be very easy to get to (the trail follows a wide fire road for a short while), and which I vaguely recalled had camping spots, but I didn't remember there being water in-between. Since I didn't want to have to push nearly another four miles if the water situation didn't work out for Prospect Rock (or tent sites there were full), that made staying at Douglas the only reasonable choice.

The side trail to the shelter was one of the nicer side trails I've been on, and the half mile went relatively quickly. I arrived at the shelter shortly before 4 pm to find it empty, and after resting for a few minutes, went to get water. Douglas Shelter's water source is a piped spring, and the pipe was not flowing. Fortunately, there was a pool of water collecting underneath that looked like it had some motion, so it was likely fresh and being replenished from somewhere. The small pool made it hard to actually fill up my water bag, so it took three trips back between the spring and the shelter to collect water and filter it. The water, though, was extra-cold, and well worth the effort. (The lack of flowing water and the size of the pool made it questionable whether I'd be able to collect enough water to stay at the shelter; but that doubt was quickly alleviated.) 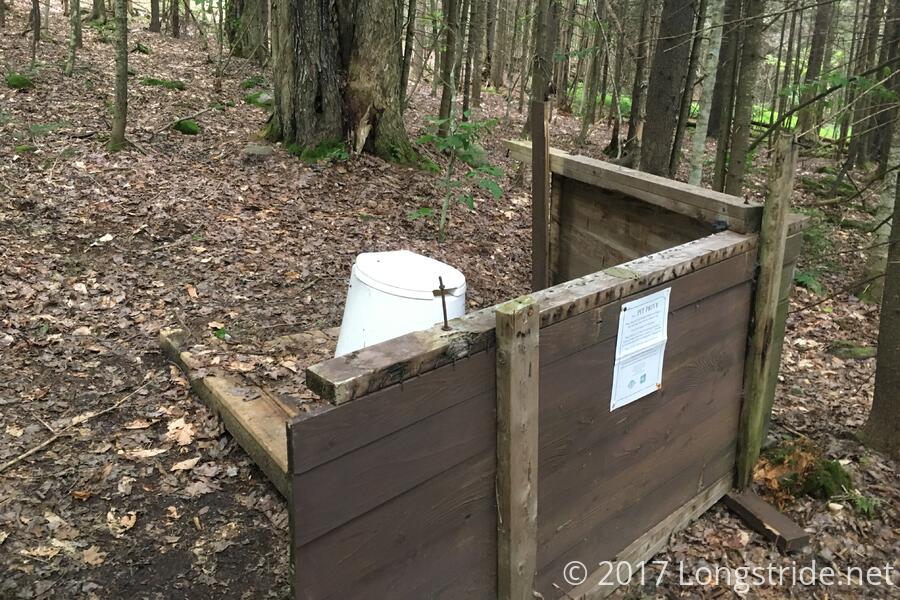 Douglas Shelter Privy — Poop outdoors, and be one with nature.

After I had been there for an hour or so, Neal and Pax, and Gas arrived in short order, so I no longer had the shelter to myself, and there was a "guard dog" in the unlikely case of bears. Gas sat down on his clearly far-too-comfortable camp chair, smoking cigars, and we spent much of the evening discussing old hiking stories. 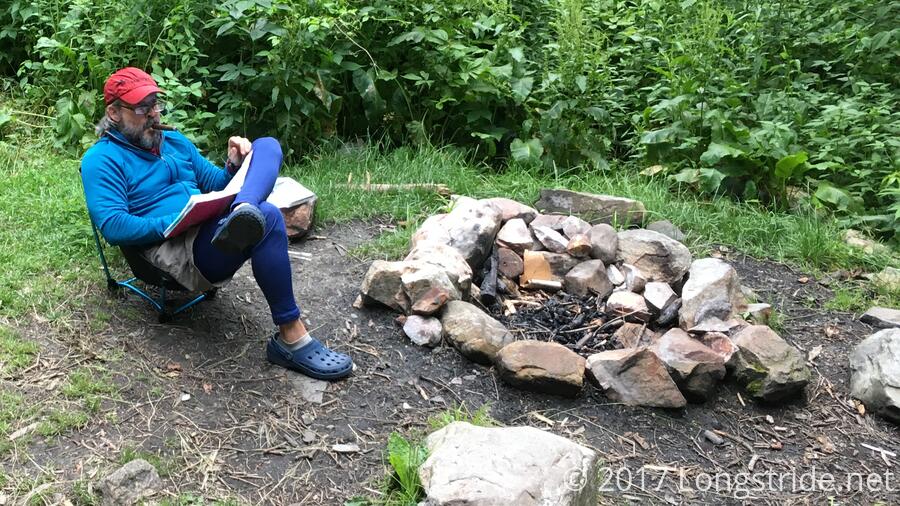 Tomorrow: a short day into Manchester Center, and a stay at the Green Mountain House.