We intended to leave town early today, skipping the hostel's waffle breakfast in favor of something more substantial at the Subway at the other end of town on the AT. Unfortunately, even though we verified via Subway's website that they open at 7 am, when we got there at 7:45ish, we found them to be not open yet; the lights were off and no one was inside.

Our breakfast salvation was Mojo's, right next door, where Beast and I had an amazing breakfast quesadilla. Unfortunately, they were slammed, so it took us almost an hour to get our food.

While we were waiting, Beast brought over a National Geographic that was sitting on a table of magazines. The cover article was about "real zombies". Giving Nat Geo the benefit of the doubt, I assumed the article was actually about the cordyceps fungus. Instead, it turned out to be about wasps who lay eggs in ladybugs. Because that makes for much better breakfast material.

We finally got back out to the trail around 9:15, initially following the Virginia Creeper Trail (the former route of the AT, until the AT was rerouted off the shared bike path), until the trail branched off into the woods.

The morning also brought a confusing detour due to a washed out bridge (with signs dating from 2013); fortunately, additional signage and instructions had been recently put in (they were not there last year, according to Beast), so it made following the rerouted trail much easier.

The trail today felt like it had a different character to it. That might just be because of the terrain, or that we're in Virginia, and not North Carolina or Tennessee, and so a different trail management style from a different managing AT club. I can't quite explain it.

The weather forecast called for rain all afternoon. Fortunately, the rain held off until just after I got to the shelter.

Since leaving Damascus, it also seems like the people on the trail are all new, too. A number of them have start dates much earlier than Beast or I do (which doesn't really mean anything in particular), but it feels to me like we exited one bubble and entered another.

A SOBO staying at the shelter, Bean, who started from Front Royal, seemed to confirm this: she said she's passed like 50 people a day recently, and that we're at the tail end of a bubble.

Beast's thought is that maybe Damascus bottled up a bunch of people and released them all at once. There's precedence to this idea, since we met a few people at Woodchuck that had zeroed there for several days. (Which seems weird to me, since there's really not that much to do in Damascus right now; Trail Days doesn't start until the 13th.

It'll be interesting to see how the people on the trail change, as we start to push into whatever bubble is ahead of us, and especially as people bounce out of the trail back to Damascus for Trail Days. (We do not plan to do this.)

The shelter we're staying at, Lost Mountain Shelter, has "No Parents / No Bedtime" written on one of the roof support beams. I suppose this is why we are all in our sleeping bags at 7:30 pm. 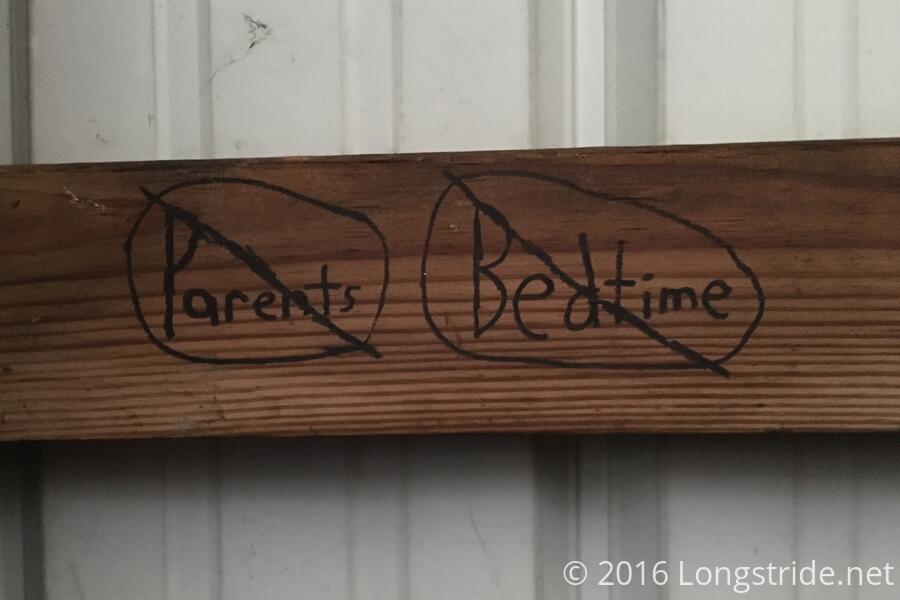