A short day brought me to the town of Winter Park, rather than Fraser, and I did not go to Denver today as planned.

It was nice and sunny by the time I started hiking today. With only five and a half miles to go to Berthoud Pass, I wasn’t in any rush this morning, and didn’t leave camp until 7:30.

Shortly after my campsite, I passed by a small valley with lots of different blooming wildflowers. 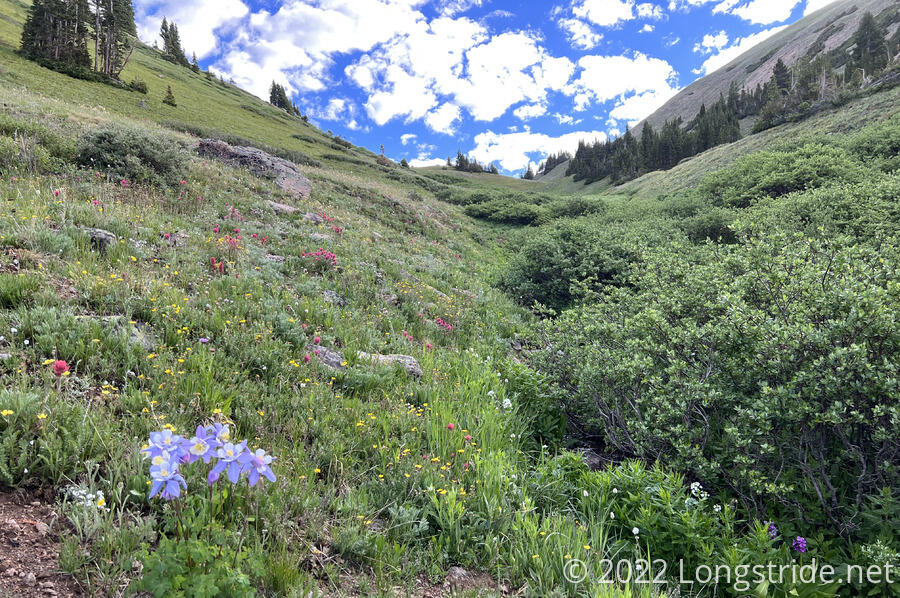 Flowers in a Valley

The high point of the day was Stanley Mountain, whose summit was a rocky jumble of rocks just off the trail. Along the way, I saw a few day hikers, including one who reached the summit just before I did.

Leaving the summit, the trail followed along a ridge, similar to yesterday, bouncing up and down a few times before eventually descending towards Berthoud Pass. 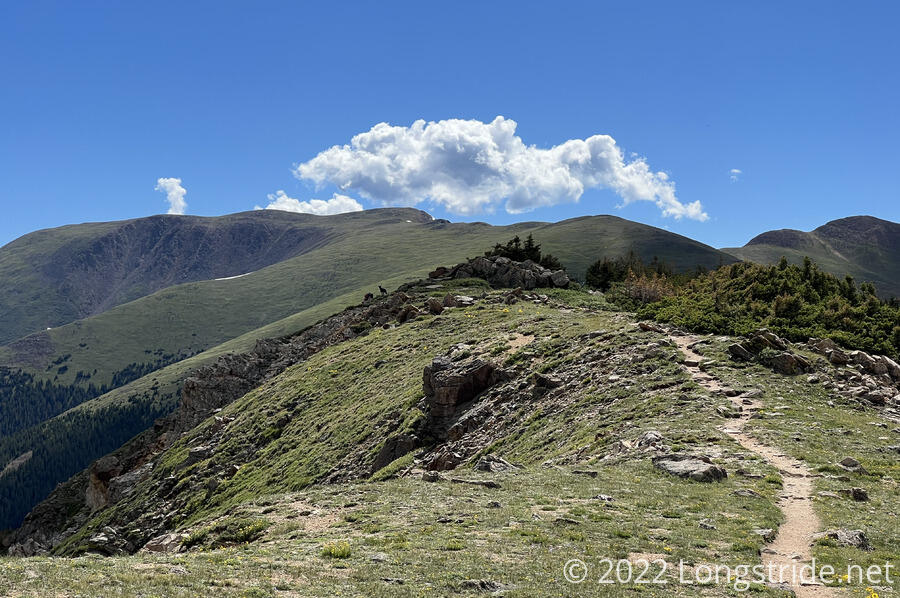 The trail follows a ridge.

Just before descending, I took a very short side trail to summit Russell Peak. The descent down to the pass started off somewhat steeply, with quite a few tight switchbacks. I passed a lot of day-hikers on their way up the hill, and paused to chat with a few of them.

Ahead, I could see the mountain I’d have to climb up from the pass when I return to the trail in a few days. It looked like it’d be a pretty steep climb. 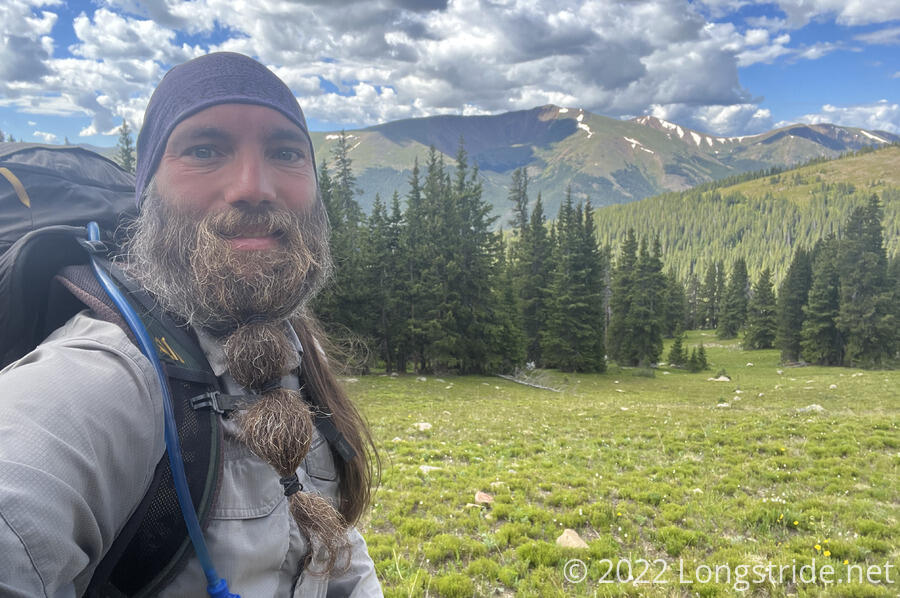 At the pass was a large (and mostly full) parking area, and a small building with restrooms. Given how many people were there, I expected it wouldn’t be too hard to hitch into town.

It turned out to be more difficult to get to town than I expected, though that was mostly self-inflicted. I intended to go to Fraser, where the Amtrak station is, to catch a train to Denver. However, the first two people who offered to give me a ride (including someone who stopped only a few minutes after I started trying to hitch) were only going as far as Winter Park, a few miles short. I should have taken either of those two rides, but I’d forgotten that there was a free bus that ran between Fraser and Winter Park. Once I remembered that, I knew I could accept a hitch into Winter Park. It then took another fifteen minutes for someone else to offer a ride, and they agreed to take me all the way to Fraser.

The road to Winter Park and Fraser from the pass started off steeply, with quite a few switchbacks. Rocks shed by the mountain littered the side of the road.

Now in Frasier, I got lunch at a Mexican restaurant, Azteca. While there, I learned that my train, which was supposed to depart at 3:50 pm, had been delayed six hours. With a three hour transit time to Denver, that would mean I’d arrive there well after midnight — assuming the train didn’t become further delayed.

Not really wanting to arrive in Denver that late and pay for a hotel room for basically half a night when there was a much cheaper option in Winter Park, I investigated other options. Discovering there was a cheap bus that would take me to Denver tomorrow morning, I called my hotel to see if they’d let me cancel the first night of my reservation. They were happy to do so, free-of-charge, probably because of the reason for the change.

Amtrak wasn’t quite so helpful, and I got stuck with a cancellation fee on the train ride.

I took the bus from Frasier back to Winter Park, and got a room at the Viking Lodge, which has a very inexpensive rate for CDT hikers. It was easily the least I’d paid for a hotel room in Colorado so far, though the room was appropriately small and lackluster. Conveniently, the bus to Denver tomorrow leaves from the parking lot adjacent to the Viking.

I got dinner at an Indian restaurant, which was a bit pricey, but still delicious.

The Viking also offered free laundry which I was quite happy to take advantage of.

Tomorrow: I head to Denver, and try to get some errands done before picking up my partner, CareFree, from the airport.