Continuing through the Wind River Range, I crossed no shortage of creeks and rivers as the trail begins to leave the mountains.

With a goal of over 20 miles today to, I left camp about an hour after sunrise, continuing northwest through the Winds on a trail surrounded by small shrubs and rock. A little bit of bouncing through the mountains brought me to the first substantial water of the day, Fremont Creek. On the way, a southbounder mentioned a trail reroute just ahead. Some signs made the reroute fairly obvious: a bridge had been washed out and a temporary bridge for hikers had been installed while a trail crew worked on rebuilding the the bridge. (The crew had at least six tents, three of them quite large, in a meadow uphill a bit off-trail.)

From the creek, I began a somewhat steep uphill climb. Not surprisingly, there wasn’t much tree cover, but on a rock under some pine trees, I saw a squirrel eating a pine code. I got surprisingly close to it before it seemed to take notice me and run off. 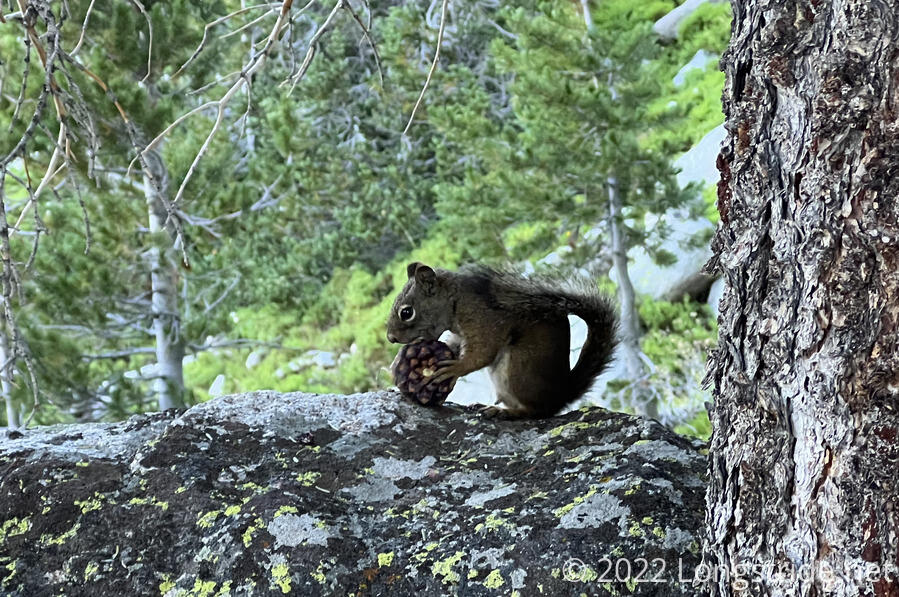 The steep section lasted about a mile, and the trail leveled out for a bit, winding through a rocky landscape filled with lakes and creeks. 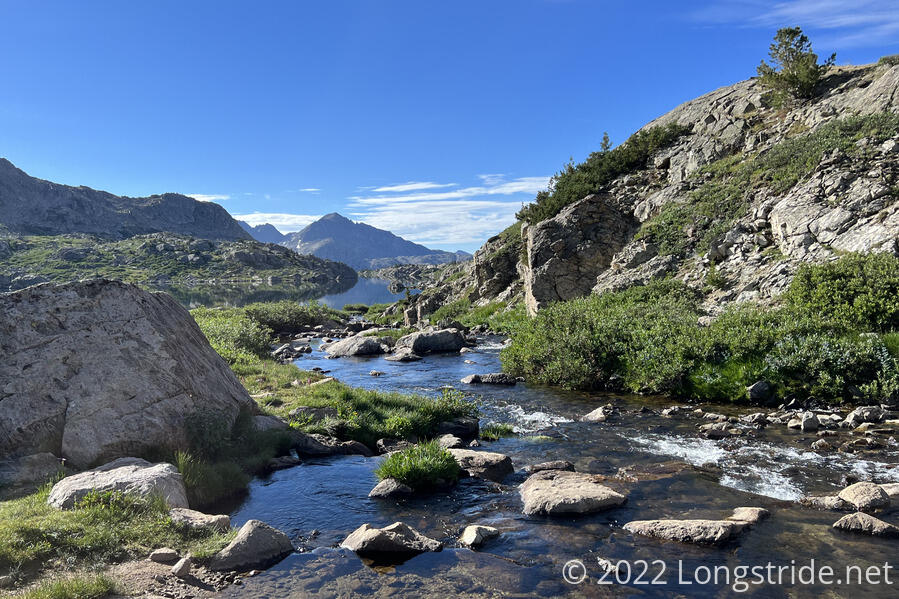 Some small snow fields still remain on the trail, mostly in areas shaded from the sun for long periods throughout the day. I’m a little bit surprised there’s still snow on trail, but 10,000 feet is still a relatively high altitude, and it’s generally not been very warm out.

Continuing to climb, I passed a few more lakes, which brilliantly reflected the nearby mountains and clouds.

The trail spent a few miles winding through a rocky pass, making a sharp left turn at a side trail to Shannon Pass, which would have connected me to the northern part of the Knapsack Col alternate. That could have made for a little shortcut, but I opted to stay on the CDT. 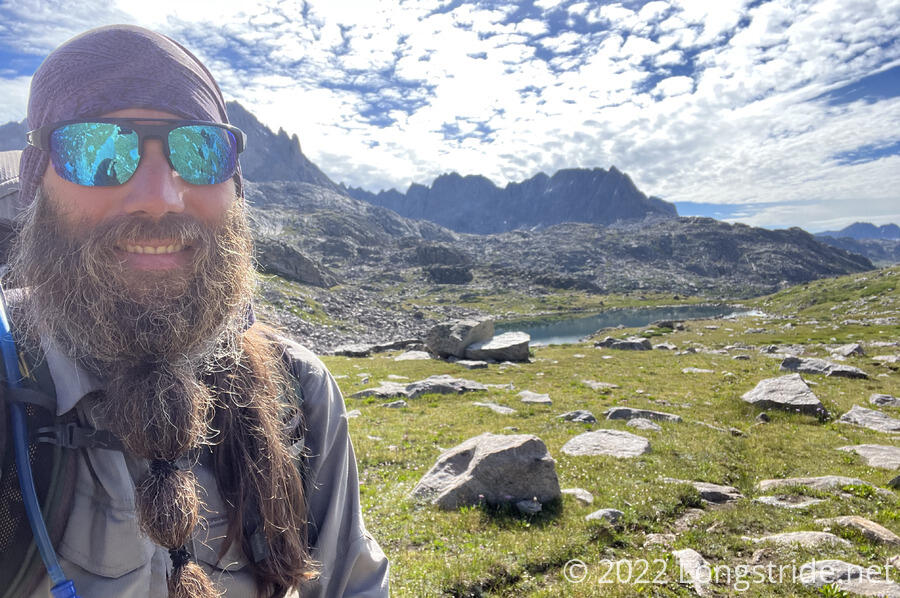 I passed the occasional hiker heading south, and a couple of small groups taking breaks. One group, a couple sitting by a lake, had a dog that charged at me barking and howling as I approached on the trail. It ignored its owners calls to come back, and they had to come physically take hold of it because it wasn’t responding to voice command. The dog was lucky it stopped where it did, and that I didn’t have time to get my bear spray out, or it would have had a very bad day. (Bear spray may well have been overkill for a dog, and it’s not like I wanted to spray it, but my safety is more important than the well-being of an uncontrolled pet.) Later, I rearranged my bear spray to be more easily accessible.

I stopped for a break a couple of creek crossings later, as the trail crossed a roughly flat meadow. Shortly after I sat down, it drizzled for a few minutes, presaging a more extensive rain later. Rain clouds seemed to be blowing in roughly the direction I was heading.

The rain started again after I left the meadow, dropping down into a creek valley that, thankfully, had trees to help shade the rain. It didn’t much help with staying dry; it had already rained over the forest more extensively while I was taking my break, and the trail and plants alongside were rather wet.

The trail remained in a pine forest for most of the remainder of the day, occasionally raining. Early on, I passed the north junction of the Knapsack Col alternate, and the trail generally followed next to a creek, gradually heading downhill. Eventually, it came time to cross the creek; with waterfalls and fast-flowing water, there was no way to cross dry. I swapped my boots for my crocs and crossed, though the speed of the water (and its coldness) didn’t make the crossing easy. Three other hikers, heading uphill, got there just as I was crossing, and we chatted a bit while we were all changing shoes.

The trail switchbacked down the mountain from the crossing, above a steep, deep gorge cut by the creek, and I passed several more groups of hikers heading uphill along the way. I stopped for a break at the very-appropriately-named Green River, which, much to my surprise, really did have a green color to it. 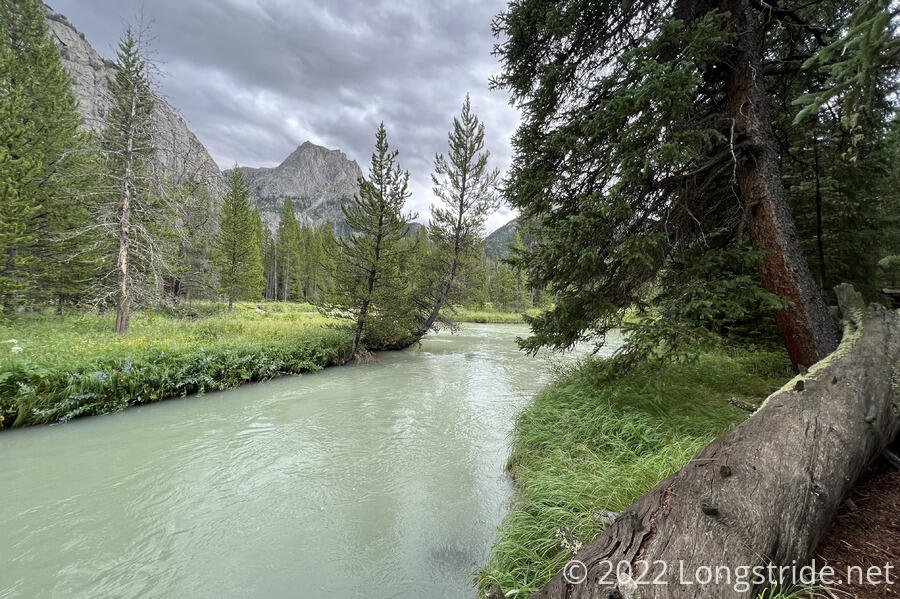 The trail followed the river valley from above, in the pine forest above a wide (and probably marshy) meadow that surrounded the river. Following a river valley in a canyon with high cliffs and mountains rather reminded me of the Gila River Alternate, back in New Mexico, only, this was far greener than New Mexico ever was.

I passed five southbounders, I think the largest group of sobos I’ve seen so far, and reached a nice campsite down from the trail next to the river. I got my tent up just as rain started. Had I been south of the Winds, I’d have cooked from my tent. However, now that I’m in Grizzly country, from here through the rest of the trail north, that’s not really safe. (Really, food scents in the tent isn’t “safe” anywhere, but I’m really not inclined to play games with grizzly bears.) So I spent the next hour cooking dinner on the other side of the campsite, huddled under a tree that provided less and less coverage from the rain as the rain gradually picked up. Some thunder and lightning accentuated the less-than-ideal weather. By the end of dinner, my rain jacket and rain pants were thoroughly soaked, and I was cold, but at least my clothes weren’t too wet.

Today, in general, I still felt rather slow on the uphills, and I wasn’t even all that fast on the downhill’s either. But, I feel like I made reasonable progress today, just over 20 miles. I’m aiming for over 20 miles again tomorrow. Which should be a little bit easier, because the pack will have less in it.

Tonight is the last night in the Winds. The trail will follow the Green River out of the valley, beyond the northern extent of the Winds, and begin to head towards Yellowstone, which should now be less than a week away.

The next couple of days are going to be interesting, though, and not in a great way. About a day and a half ahead, the trail was rerouted recently, and for some reason, my trail guide doesn’t actually have any waypoints listed — the official trail is just a 28 mile long red line with no further details. Fortunately, the old trail, a blue line, is still marked as an alternate, and still has all of its waypoints. I’d already planned on taking the blue line, since, besides being six miles shorter, that’s where Brooks Lake Lodge is (and my new pack and resupply are). The lack of details on the redline and having to detour to get my new pack are a bit of a nuisance, but that’s not really the complicating factor.

It seems that there’s a grizzly bear actively causing problems on the southern part of the blue line. At least one hiker has reported emptying their can of bear spray to chase off a bear after it charged them, and a rancher has reported seeing the bear go after calfs in his herd. The rancher also apparently believes that the bear is guarding a kill, and is recommending hikers stay on the trail, and also to not camp on or near the trail. Bear danger aside, this is problematic because the distance required to camp short of, or beyond, the southern section of the old trail requires either a very long, or very short day tomorrow. Not really sure what’s going to happen, though; I guess I’ll figure it out tomorrow.