Today’s hike with MAHG took me to Virginia’s Sky Meadows State Park, located in the Blue Ridge Mountains, and allowed me to re-visit the Appalachian Trail, which crosses through the western portion of the park’s Blue Ridge Backcountry section. As it was when I passed through last June, it was a beautiful day for a hike: clear skies, pleasant temperature, and a light breeze on the ridge.

A large group today of 19 hikers and one dog, we started at the trailhead at the parking lot near the park’s Mt. Bleak-Skye Farm national historic area, and followed the Boston Mill Road, a dirt road, to the Gap Run trail, which began our ascent up to the ridge.

Gap Run started off with a gradual ascent, before becoming considerably steeper. After about three-quarters of a mile, we reached the intersection with the North Ridge trail. The North Ridge trail completed our climb up to the ridge, and in combination with Gap Run, we gained about 1000 ft of elevation over a little more than a mile and a half, bringing us to the day’s high point after just two miles of hiking.

Reaching the ridge provided me a familiar sight: the white blazes of the Appalachian Trail, which entered Sky Meadows a bit further south from this trail intersection. I was last here just over ten months ago, about a day and a half before reaching Harpers Ferry, the spiritual halfway point of my AT thru-hike.

As luck would have it, an AT section hiker was there, taking a break at a bench. Starting from Harpers Ferry, he was a couple of days into a planned 60 day section hike, and said he’d already seen a dozen northbound thru-hikers, who were all clearly making very good time. (Mid-April is somewhat early to be reaching this section of trail; I didn’t get here until early June last year.)

After a brief break to allow the rest of our group to catch, up, we headed north on the AT a short distance, before turning off onto the purple-blazed “Old Trail”, an old alignment of the AT.

The trail so far today, but especially on the Old Trail, was beautiful. In most areas, the trail was lined on both sides with grass and several varieties of small yellow, white, and purple flowers. 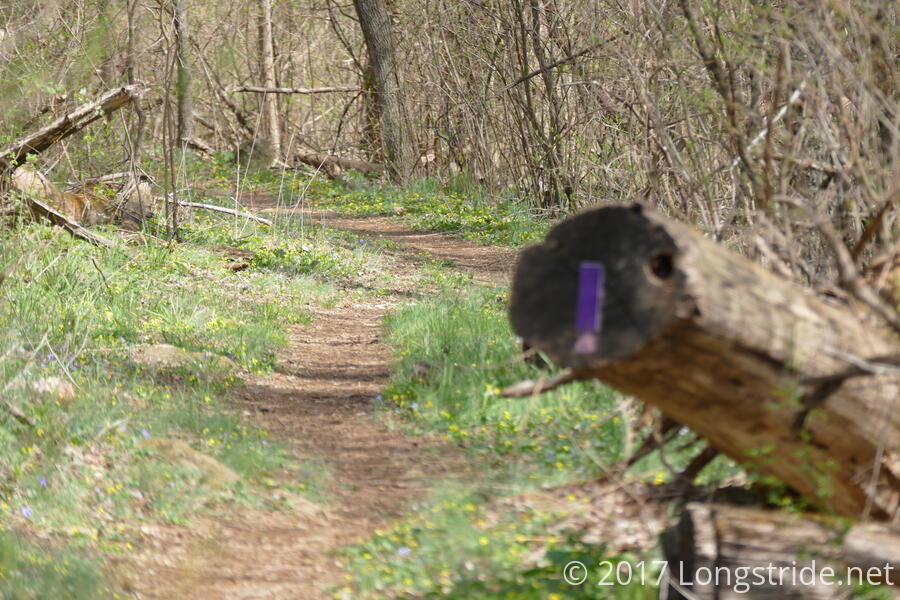 Two miles on the Old Trail brought us back to the AT, which we then followed south (and back uphill, because the AT always goes up) for about two miles, to the intersection with the Ambassador Whitehouse trail. 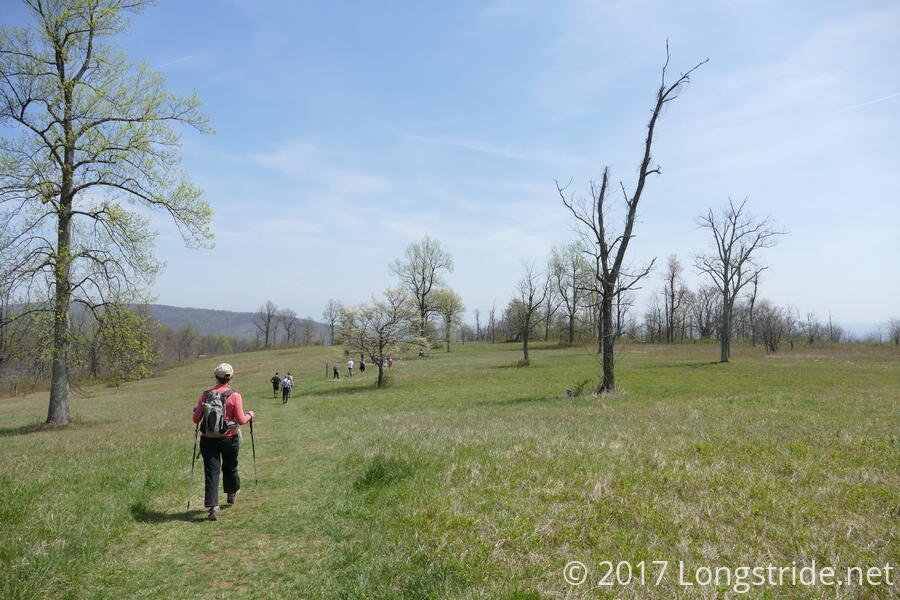 Meadow on the Ambassador Whitehouse Trail

The Ambassador Whitehouse trail, leading us on a gentle slope down the mountain, went through the middle of a clearing, each step providing slightly better views of the valley below. At a dog-leg in the trail, we went through a fence stile that let us into the Whitehouse Overlook, which gave a great view of the valley below. We stopped for lunch here, many of us sitting on an old rock wall as we ate and took in the view.

Continuing along the trail, we passed by a small PATC volunteer work crew, which was clearing brush on the side of the trail and building new drainage bars. (Thanks for helping to maintain the trail!) The trail took us down the mountain a short distance before re-joining the North Ridge trail, a short distance east of where we joined it on the way up the mountain, and followed it only briefly before turning onto the Piedmont Overlook trail. A very short climb (over-hyped by our hike leader as the “last climb of the day”) brought us to an overlook of the valley below, the visitor center and parking lot now within view.

The trail returned us to the the Boston Mill road, in what our hike leader called “record time”, and from there, we quickly returned to our cars and dispersed.

Not quite ready to be done for the day, I took the opportunity to briefly explore the Mt. Bleak-Skye Farm national historic area, which features structures dating back to 1780. There were historic interpretations ongoing in several buildings, including a blacksmith and a hearth cooking demonstration. A small chicken coop was open, with corn available to children to add to a feeder. In the distance, cows grazed on the hillside.

A great hike, I may return at some point to explore the trails east of the historic area, in the “Lost Mountain” area of the park. 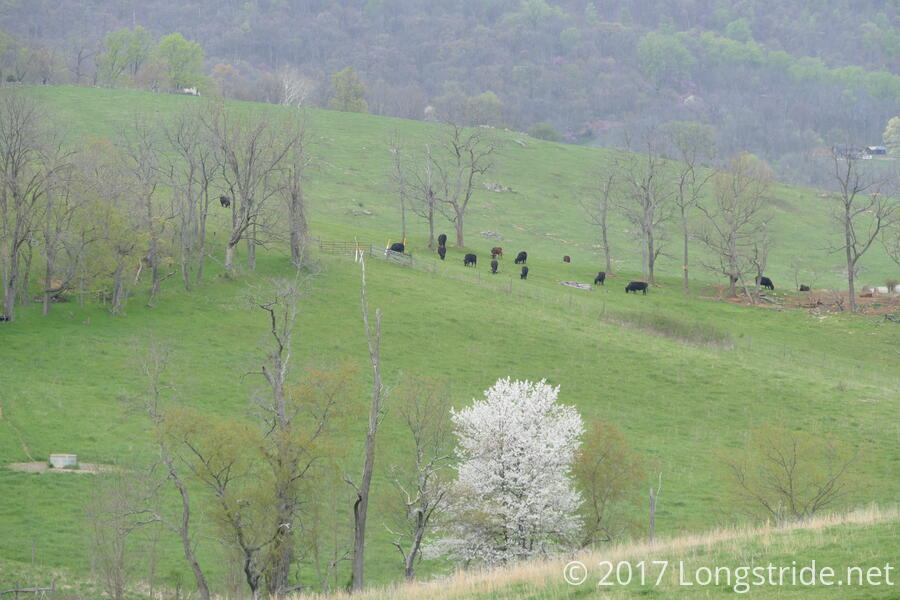