Today, the trail ended its westward march and turned northeast. It was a difficult day, but not without its rewards.

I woke up in the middle of the night to find a caterpillar on my head. I’m surprised it didn’t get squished, either in the process of me rolling over at some point, or in my picking this weird thing that (probably) woke me up out of my hair. Either would have been uncomfortable for both of us. Hopefully, it survived the Great Caterpillar-Flinging-Out-Of-Tent Event of 2020.

I didn’t sleep that well, thanks to the slightly hard, rocky ground I pitched my tent on. But, it was warm enough that I could keep one tent flap open for ventilation, and the breeze which blew all night kept everything dry.

I was up before sunrise, though seeing the sun actually crest over the Blue Ridge to the east was difficult, since it was a bit further north than the overlook gave easy access to. Still, it was a good way to start the morning. I could even see fog rising over the Shenandoah River.

I managed to leave camp around 7:30, and about fifteen minutes later, reached a side trail for a view. Perhaps getting the notion that I’d better check this one out since the bulk of the day was likely to be view-deprived, I checked it out. Dropping my pack at the base of a brief rock climb got me a view that was worth the effort. 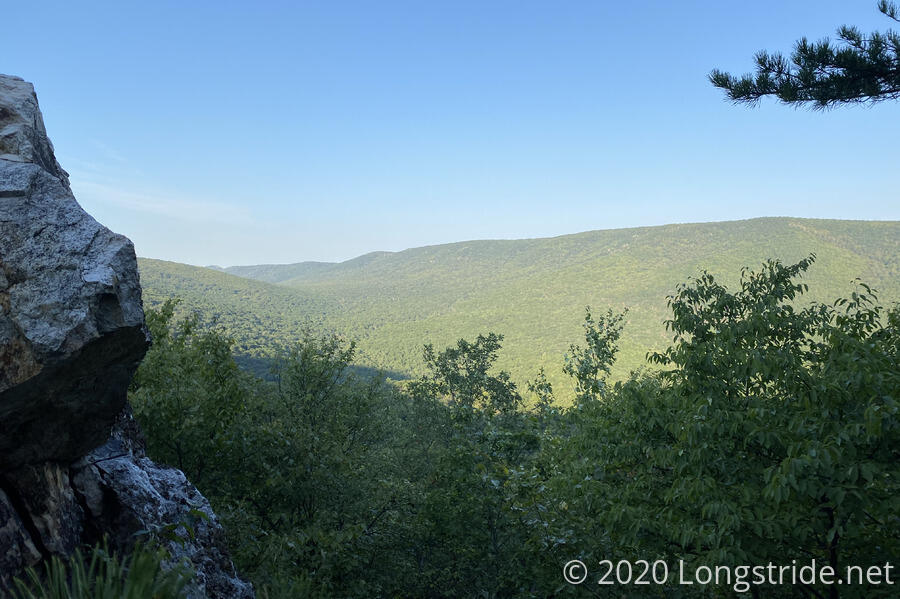 Another ten minutes past the view was a piped spring that was flowing nicely. I took the opportunity to filter and refill with the cool, clear water.

Shortly after, the trail turned downhill and followed along a wide road bed. I made good time, for a short while, at least.

The trail passed over a dry creek bed. A sign (with googly eyes) informed that a log bridge once there and listed on the PATC map has been removed. I guess someone thought the bridge was an important waypoint.

An hour and a half, and 2.4 miles from where I started, brought me to Cedar Creek, my planned destination for yesterday. There indeed was a campsite at the creek, as I hoped, though, of course, yesterday’s campsite-with-a-view was much better.

Eventually, the trail turned back uphill. It felt slow-going, but I could tell I was slowly starting to regain my trail legs: I was able to go further, even if slow, without having to stop for tiny breaks as often.

Shortly after the trail approached and began vaguely following the Virginia-West Virginia border, I cut back into Virginia on a side trail to a view at “White Rocks”. I didn’t particularly note many white colored rocks (maybe there was too much lichen on them), but there was a great view back to the east. 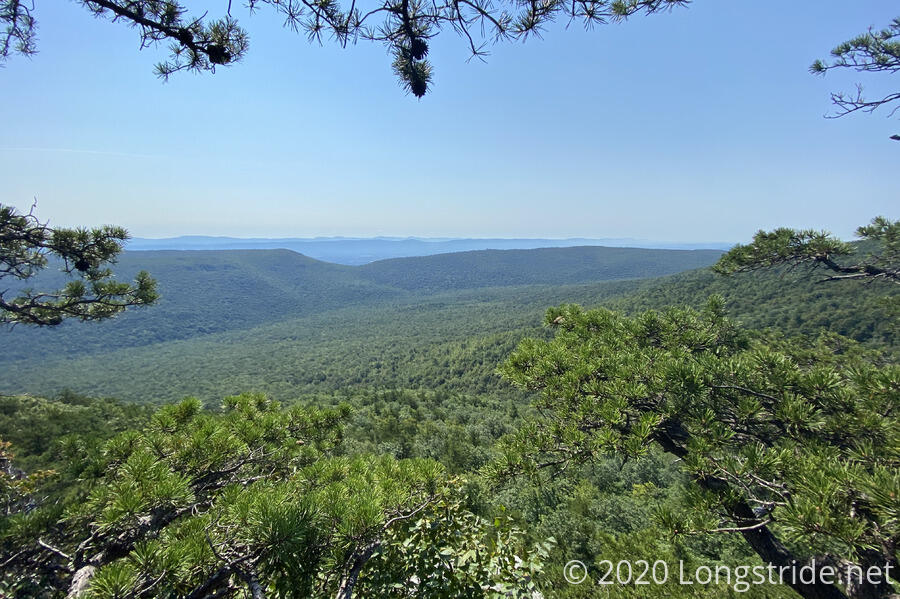 Back on the trail, I was happy to see it join an old road bed, which made for some easy hiking. I put on some music which helped boost my speed a little. In a case of perfect timing, the music ended about five minutes before I ran into my first other hikers (and humans) of the day.

PATC’s Supervisor of Trails, and Tuscarora South District Manager, John Stacy, was leading a small work crew out to inspect something on the trail near where I was. We’d exchanged a few emails prior to my setting out, offering some helpful information. He called out to me by name, and said he thought he’d run into me today; I was impressed, given the most-recently-posted information on my whereabouts he had to go on was six days old when I had not yet reached Shenandoah!

My immediate concern was a dry stretch up ahead, and he generously offered to drop a couple of gallons of water for me at two places up ahead, which I’d get to tomorrow. That relieved me of the burden of having to make a massive water carry starting later in the day. I also shared with him some notes I had on trail conditions to the south. He was also kind enough to take my trash, which was all conveniently stuffed in the Gatorade bottle I got in Toms Brook yesterday. It was a good conversation, and I’m glad I had a chance to put a face to the name. Thanks John, and the rest of PATC’s volunteers for all you do for the trail!

Only five minutes further on the trail brought me to a campsite at a trail junction of the Tuscarora and another trail, as well as a third trail to a view. I dropped my pack and headed over to the view for a few minutes, and then returned to take a break. 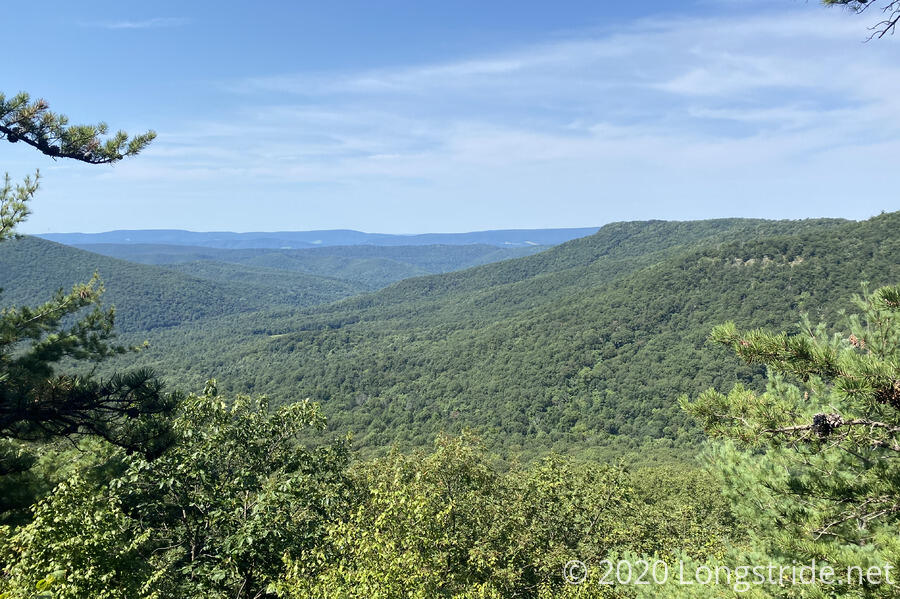 Just prior to this campsite, the Tuscarora reached its westernmost point, and made a turn to the northeast, which is the direction the trail will generally follow from here until it reconnects with the Appalachian Trail in Pennsylvania.

Continuing downhill from the campsite, the trail crossed Pond Run eight times. This reminded me a bit of Mission Creek on the Pacific Crest Trail, only in reverse. At the final crossing of Pond Run, I stopped to collect and filter water, which I’d need for tonight and the first few miles of tomorrow. It was a nice break (even if it meant adding several pounds of weight to my pack), though the gnats flying around my head were particularly annoying.

One thought of mine had been to cook dinner at the creek so there’d be less water (and food) to lug uphill. I didn’t, because it’d mean getting to the Gerhard Shelter, my destination for today, close to sunset, and I didn’t really want to risk that. Shortly after leaving the creek, I passed by a nice campsite, and was doubly glad I didn’t cook at the creek, because there was a perfectly good campsite (that I didn’t know about) that would have been a lot more comfortable.

After crossing another creek (which I’d been advised not to take water from, since it was downstream from farms), the trail turned onto a grassy road bed that was truly a delight to hike. 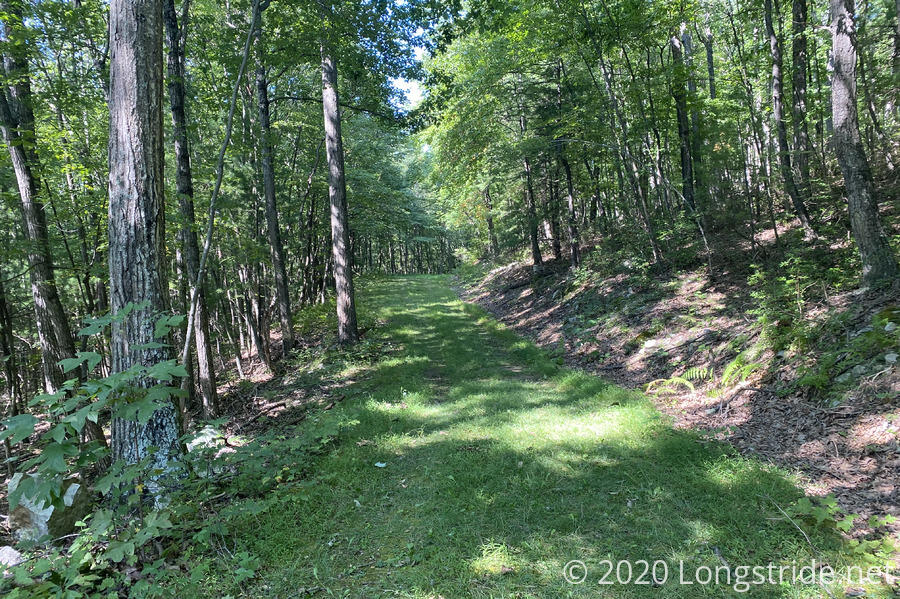 Grassy Switchbacks — If only all switchbacks could be like this.

For a short time, it felt like one of the gentlest switchbacks ever constructed in the Appalachians. This, of course, was not true. After an initially nice leisurely jaunt back and forth, the trail turned sharply upward, and began climbing to the ridge in earnest. (Also with rocks and roots, rather than grass.) There were more switchbacks, but they felt so steep that they weren’t actually reducing the grade any.

It was still fairly warm today, which did me no favors on the steep climb, and I had to stop for a short break on a rock to cool down and regain some energy.

The trail started off climbing the ridge, which straddles the Virginia-West Virginia border (at least for now), from the West Virginia side of the mountain. As it got closer to Gerhard Shelter, it eventually switched to the Virginia side of the ridge. Along the way, views both to the east and west could be seen, though most were occluded by trees. It’d be a better sight in the winter.

I arrived at the shelter shortly before six, and immediately got to work drying off and starting dinner. the shelter’s roof was rather low to the ground, exposed to the sun, and black, so I put my socks on the roof, hoping that would help dry them quicker.

Gerhard Shelter does have a spring, however, it’s over half a mile down the mountain, and it runs dry in drier conditions. (John Stacy confirmed that it was currently dry when we met.) This was the main impetus behind a large water carry up to the shelter. And if it weren’t for the water drop he’ll make for me tomorrow, I’d have had to carry even more water: it’s a dry stretch between Gerhard and my destination for tomorrow, Pinnacle Shelter.

For dinner, I “treated” myself to a soda (that I had been lugging from Toms Brook) and which was part of the “plan” to make sure I had sufficient water. Unfortunately, it’s caffeinated, so I’m not expecting to sleep well tonight.

Pinnacle is a long way away — 17.3 miles — so I set an alarm for 6 am. Fortunately, though, the trail should mostly follow and bounce along the ridge, so even though it’ll be long tomorrow, it shouldn’t be terribly hard.