Our second day back on trail, we made good progress, going further than expected, even though the trail got a bit more challenging.

The fog I was afraid of yesterday never materialized, though we did have a fair amount of condensation on the tent, both inside and outside. It was a little cool and breezy, and the sun was shining clearly, so I was a little surprised the sun wasn’t drying the tent off faster.

CareFree and I had another chat with Jared before we left, leaving the meadow a little after 9 am. The trail this morning was well-maintained, and had been recently trimmed, with freshly-cut leaves littering the trail. Rhododendrons continued to be in bloom, contributing significantly to the trail’s beauty. 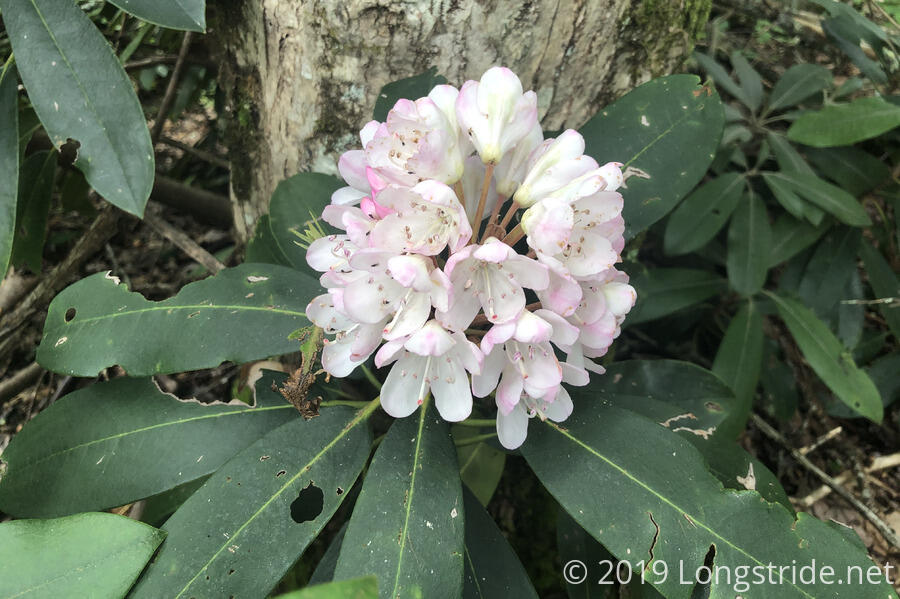 After a few miles, the trail crossed the Cherohala Skyway, the scenic road through the Cherokee and Nantahala National Forests we drove through last month on our way back home following my injury. Just past the skyway crossing, the trail reached a broken bridge across a gigantic ditch caused by erosion, forcing us to backtrack slightly and walk along the skyway about half a mile to the next road, a gravel road that the BMT crossed, and then followed. There, a sign warning that the trail was closed due to the bridge out, and recommended taking the skyway south. No such sign was evident at the south end of the closure.

As we climbed through the forest, it felt like it was getting a little less humid. It seemed as though the air itself was drier, and the humidity was coming from evaporation from the ground.

A little more than six miles in, at Cold Spring Gap, we stopped for a break, and discussed our plan for the day. We’d previously decided on about 13.2 miles to a campsite just north of Big Fat Gap. The downside to the campsite was that it was very close to a road, and had no water nearby, so we decided to go an extra two miles to a campsite off of Nichols Creek, so that we’d not have to do a water carry. It’d also cut two miles off tomorrow’s hike, which would get us into Fontana Village an hour or so sooner.

Cold Spring Gap also is the junction where the BMT was rerouted in 2015 to avoid a potentially dangerous ford of the Slickrock Creek, so until sometime tomorrow, we’re walking on relatively new (for the BMT) trail. (Actually, the BMT was rerouted over existing trails, so the trail itself is not new.)

The only significant climb today was from Cold Spring Gap to Stratton Bald and Haoe Bald. Deceptively named, neither of these summits was even close to being a bald. In fact, it was significantly overgrown. There were parts of the trail where we could barely see the ground through the thick plants.

Following the climb was a steep downhill, some of which was over rocky ground. Because the rocks were still wet and slick from recent rain, this section was especially slow for us. 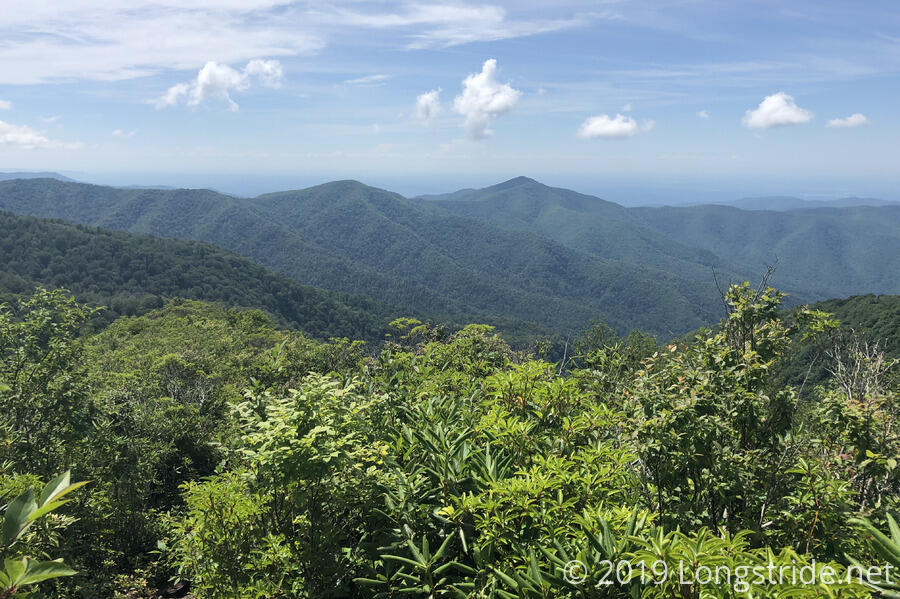 As we continued down the mountain, we saw a snake immediately next to the trail. It didn’t seem inclined to move, so I tried to prod it with my poles, and missed, causing it to face us, instead. It finally slithered away when I moved to get a twig to try and throw at it to scare it off.

Almost every day on trail, we’ve seen snail shells on the ground. Today, for the first time, we finally saw a live snail. 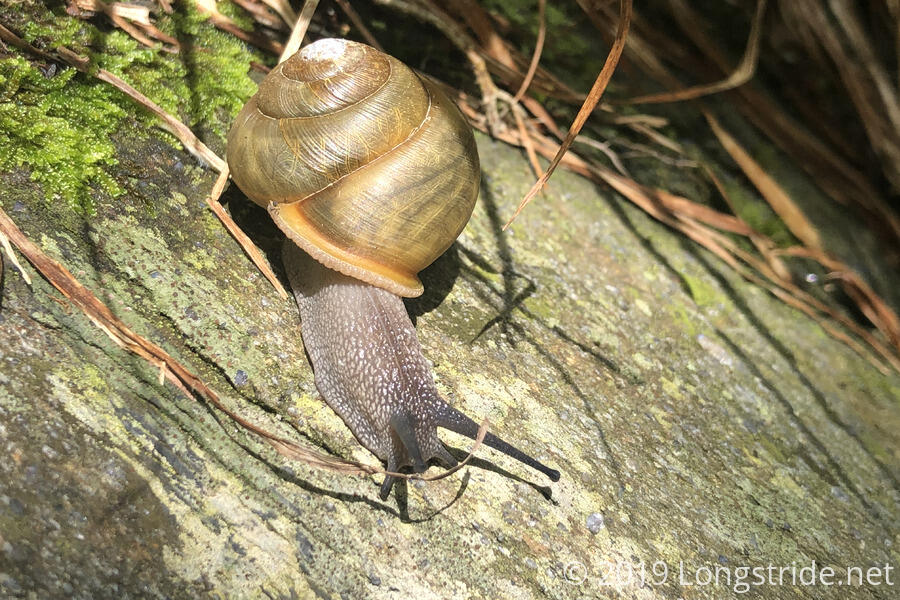 After a break about a third of the way down, we passed by the campsite near Big Fat Gap. It turned out to be a surprisingly nice campsite, and as we were getting quite tired, we likely would have stopped there if water had been available.

A little after six, we arrived at Nichols Cove, which also had a nice campsite, and was close to a well-flowing creek.

We did find some unwanted guests, though: at some point, we both picked up some ticks. CareFree found one crawling on her leg, and I found two that seemed stuck on one of my socks. We picked them off and threw them away.

The creek next to the campsite was flowing quite well, and it was wonderful to be able to rinse the sweat off our arms and legs.

True to the trail’s form, we saw very few people today. Aside from Jared at Whigg Meadow, and three bicyclists on the Cherohala Skyway, we saw no one else today.

The one other notable animal on the trail today was a songbird I heard frequently on the Appalachian Trail. I took note of the bird on the AT because its song changed slightly the further north I got — almost like the birds had a different dialect in different regions. I’d been hoping to hear the bird agin so I could get a recording of its song, and today was the first time on the BMT I heard it.

We also found a red splotch on CareFree’s arm. We were uncertain if it was a tick bite — the number of ticks we had to pick off our socks raised that possibility — but we were hoping it was irritation from how her phone case was mounted on her backpack, rubbing into her arm.

As we prepared for sleep, lightning bugs came out in droves, lighting up the forest with their yellow-green glow. It was more fireflies than I’d seen in one place in quite a long time.

Tomorrow: some more steep climbs and descents will take us to Fontana Village, where we’ll take a break for a day, before charging into the Smokies.