An incredibly hard day of hiking brought CareFree and me to Fontana Village, our gateway to the Great Smoky Mountains.

We had an alarm set for 6:30, but were very lazy and didn’t make it out of the tent until after 7:30. We didn’t think that would be a problem: we did two extra miles yesterday, so we expected to get to Fontana Village an hour earlier than we otherwise expected.

The campsite was replete with animals. We awoke to find a slug trail across the outside of the tent body. Three daddy long-legs perched above one corner of the tent. Later, we fund a slug, at least six inches long, oozing its way along the fallen tree we used as a bench last night.

Even with no one else demanding our attention this morning, we didn’t leave any earlier than we did last night. Our day started off with a continuation of the downhill we started yesterday. We were clearly the first people to hike that stretch of trail today; I walked through two massive spider webs on our way to the historic Tapoco Lodge.

The lodge was originally built for the Tallahassee Power Company (“Tapoco”), which built four dams in the area, including the nearby Cheoah Dam over the Tennessee River. In a previous plan, we considered overnighting here, or stopping for dinner. Now, though, only four miles into the day, it was a minor curiosity. With a hankering for ice cream, we poked our heads in to see if they had any. While they did have soda and coffee available, they had no ice cream, so we opted to continue on. In retrospect, I wish I’d gotten a soda there.

We crossed the Cheoah River at Tapoco, and began a steep climb, taking a break partway up at a view. While taking our break, we both found ticks on our socks. We were unclear where we picked them up (whether before Tapoco or after), but it could have been anywhere; parts of both sections of trail had overgrown plants.

Shortly after, at the appropriately-named Bearpen Gap, we saw a bear, perhaps 50 - 100 feet away from the trail. It was startled by our appearance and as soon as it noticed us, ran off into the woods.

The trail after Bearpen Gap was marked by a series of steep climbs through poorly-maintained trail. I’ve never before seen a trail with the lack of maintenance this section had; CareFree even compared it unfavorably to the Te Araroa. Grasses and briars, some four or five feet high, not only lined the trail; they were the trail. By the time we got through those sections, our legs were well scratched up, and even bleeding.

Annoyed, I commented to CareFree that someone needed to bring a lawn mower out here to clear the trail. It’s clear the Benton MacKaye Trail has a hiking season, and it’s season is not summer.

A distant rumble of thunder urged us to go faster, as if that were even possible, given the steepness, overgrowth, and lack of visibility of the trail. 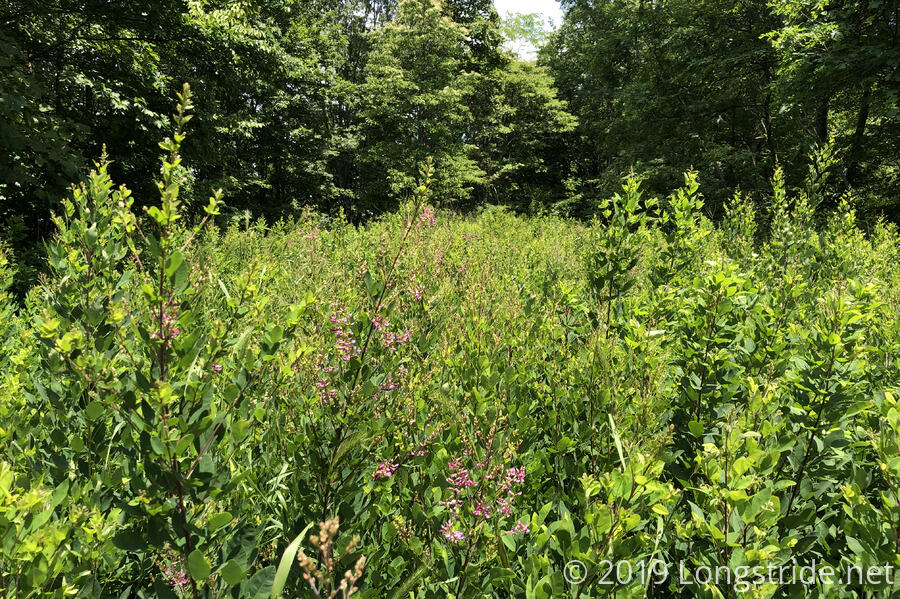 An Incredibly Overgrown Trail — Grasses and brambles four to five feet (or higher!) were the trail this afternoon.

Frustrated, we climbed back up to the trail, and had to use gps maps to figure out where we were supposed to go. After looking around a bit, I found where the trail turned down the opposite side of the mountain. A blaze and sign below eye level marked the turn of the trail, but they were impossible to see on approach due to the height of the grasses.

I later estimated we’d gone about 600 - 650 vertical feet down the access road, almost the entirety of the elevation gain remaining for the day.

During the climb back up, my water bladder ran out of water, and I was down to just half a liter in my water bottle for the next four miles. And we had to pull a tick off my leg that had latched on.

At the bottom of that downhill, tired, hot, sweaty, and very low on water, we stopped for a break. I pulled another tick off my leg, and we both pulled more ticks off our socks. On the plus side, there was a white moth sitting on a leaf, so that was cool, I guess. 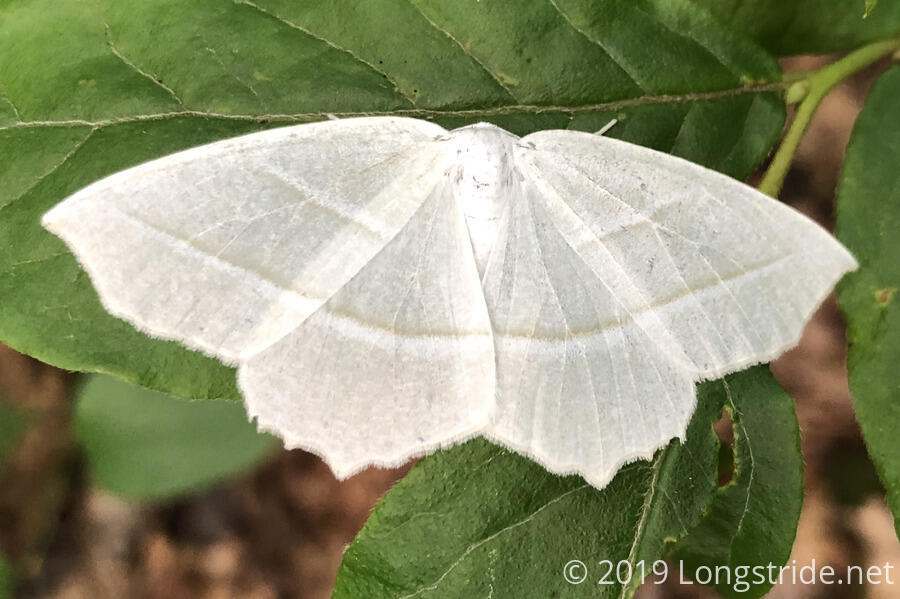 Some more thunder rumbled as we made a slow but steady pace up the next series of hills, with a light rain starting halfway up the last one. We put on our pack covers, though that was probably not necessary; the rain was fairly light until after we reached Fontana Village. Near the crest of the last hill, the smell of campfire wafted through the air. A short way down, we got a glimpse of a dog on the trail, but we never saw the camp where the campfire (or presumably, the dog) was from.

Finally, around 5:30, after 13.3 of the toughest miles we’ve hiked, we made it to the Fontana Village Lodge. We checked in, got a shower, and ate dinner At the Wildwood Grill, where we had fantastic food.

Hours after we finished hiking, our legs still felt like they were on fire, from all the cuts and scrapes we endured on the trail today. Exhausted, we did about the only thing we could do: not set an alarm. We’re taking a zero tomorrow!