Going for a new record of three hikes in a week since I returned home from the Appalachian Trail, I got up at 4:30 am (annoyingly, half an hour earlier than I had set my alarm) and set off shortly before 6 am for a “very strenuous” 12.3 mile hike in Shenandoah National Park with MAHG.

Only marginally worried when cell service disappeared and the pavement turned into gravel backroads, I arrived at the parking area at the Little Devils Stairs trailhead early, about 20 minutes before we departed for our hike at 8 am.

Cold and brisk, the temperature in the high 30s, it was a little uncomfortable standing around at the trailhead with only my fleece to keep me warm, so I donned my rain jacket, knowing full well exactly how this was going to go: I’d eventually get uncomfortably warm, sweaty, and not take the jacket off until far later than I should because stopping to remove it would kill my momentum.

Fourteen of us set off a bit after 8, following the Little Devils Stairs trail. During the pre-hike orientation, our hike leader indicated that there would be a few stream crossings as the trail winds its way up a gorge towards the ridge, but being late in the season, the water level should be low.

The stream, however, did not get that memo, and was flowing quite well. Fortunately, it wasn't terribly deep, and there were plenty of stepping stones that made crossing the stream annoying at times, but not very difficult.

The first of today’s three hills started off immediately after the first stream crossing, as the trail followed the stream uphill, gradually steepening until it reached AT-like levels of grade and strenuousness, climbing about 1500 feet over the first two miles of the trail. The difficulty was increased by the trail alternating between rock steps, and jumbles of rock, with the occasional scramble up a tall rock.

After just over two miles, we took a short break at the trail intersection with the Keyser Run Fire Road, where I remarked that the prior section of the trail had been “properly strenuous”. By this point, I had taken off my rain jacket, and over the course of the rest of the day, the temperature rose into the high 40s, making my fleece more than warm enough.

Following our break, we followed the fire road for a much more gentle climb the rest of the way to the ridge, joining the Appalachian Trail. We followed the AT south for just under four miles, climbing over Hogback mountain, before turning off the trail for a lunch break at the PATC’s Range View Cabin. (Our original plan to take our break at the scenic Rattlesnake Point overlook was thwarted by not realizing until it was too late that the sign advertising the overlook was intended for drivers, not hikers, and was pointing towards a parking area visible shortly up Skyline Drive.)

The last time I was on this section of the AT was during my last full day in the park, sometime between second breakfast at Elkwallow Wayside and lunch at the Gravel Springs Hut. I tried to look for anything familiar, but the combination of leafless trees and going south, plus that day being over 23 miles long, on top of my being distracted by Beast’s bear troubles the prior day, meant that absolutely nothing looked familiar. 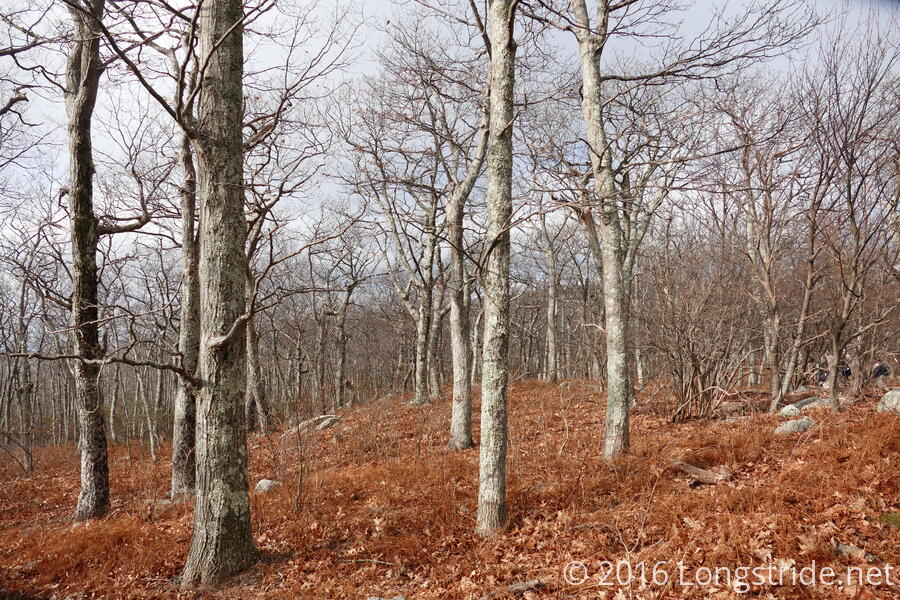 On our way to the cabin, we ran into a group of hikers hiking in from another side trail. It turned out that one of them, a thru-hiker named Bang Bang, had also completed a thru-hike this year, finishing a little more than a week after I did. They were also heading to the cabin were stopping for lunch at, which they were renting for the night. (I had figured the odds of seeing a SOBO today would be rather unlikely, given we were only on the AT less than four miles, so I was pleasantly surprised to have run into a completed NOBO.)

After lunch, we turned off the AT, following the Piney Ridge and Piney Branch trails gently downhill for another four and a quarter miles. Near the bottom of the hill, a well-flowing stream blocked our path, and an brief initial inspection did not reveal immediately obvious stepping stones. The hike leader who had been here before, suggested bushwhacking further downstream and crossing via a fallen log, and one other of our group and I followed. In retrospect, I wish I had spent some more time searching for a crossing nearer to where the trail crossed the stream before committing to the log; because recent rain, the log was still waterlogged, making it slightly slippery.

At the bottom of the hill, we turned onto the Hull School Trail and began our third climb of the day, along the side of Pignut Mountain. Fortunately, this was a short climb, only about 500 feet over just under a mile, and we stopped for a short rest at a graveyard dating back to the early 1900s for the original residents who lived in the area before Shenandoah became a park.

From there, we returned to the southern portion of the Keyser Run Fire Road, and enjoyed an easy mile downhill back to our cars, finishing our hike around 2 pm, less than six hours after we started, having kept a truly excellent pace throughout the day. (That pace wasn’t fast enough for one of our hikers, though, who left the group fairly early on and hiked ahead even faster than we were going.)

Today’s hike was advertised as having about 4000 ft elevation gain over 12.3 miles. The elvation gain was spot-on, but my GPS recorded our hike today as being 13.2 miles. Clearly, we picked up a bonus mile somewhere.

We clearly picked a good time to start our hike today. When we got to the trailhead in the morning, the parking lot was relatively empty; most of the cars were ours. When we returned, the lot was full, and a long string of cars were parked alongside the gravel road leading to the parking area. Hopefully, they all had as great a day hiking as we did.

Nine of us opted to continue our post-hike parking lot conversation at a restaurant, Northside 29, roughly a third of the way back home. After food and great conversation, we left, presumably returning to our respective homes.

Next up: Er, waitaminute. I’m going hiking three days in a row? How did that happen?