Weather on the PCT: Nice Until It’s Not
Tags: Pacific Crest Trail

One aspect of any thru-hike that hikers have little control over is the weather. Mother Nature is fickle and can change on a whim. A difference of a few days can cause great changes in how a hike proceeds. While the weather can be planned for, luck also plays a big role in how the trail unfolds.

All things considered, I had fairly good weather for my hike.

My hike started off dry. Only twice did I see any precipitation south of the Sierra. The first was a light rain on the second night and morning after I started. Later, an unexpected cloud blew in the day I summited San Jacinto, leaving me hiking through fog, and robbing me of a view at the summit.

Thanks to my early start date of March 21, I made it out of the SoCal desert before it got too hot. This let me avoid night-hiking in SoCal. I suspect that if I’d started a month later, I’d have been doing a lot of early morning and late evening hiking to beat the heat.

There was really no avoiding the days in northern California where it was over 90 °F, however. Sometimes, the only thing keeping the temperature below 100 °F was elevation.

In the Sierra, I was lightly rained on one day, and hailed on another. My first attempt at summiting Mount Whitney was marred by snow and hail, and some hail fell the following evening.

After that, I had clear skies (well, dry skies, really) until Washington, where I got rained on for twelve days, including a rather demoralizing stretch of ten days where there were hours of light rain each day (and one day with snow). That stretch of rain gave way to three days of perfect weather, followed by a dreary (but dry) morning leading to the northern terminus, and then a rainstorm that started in earnest as I left Manning Park, BC in a car to return to Washington. 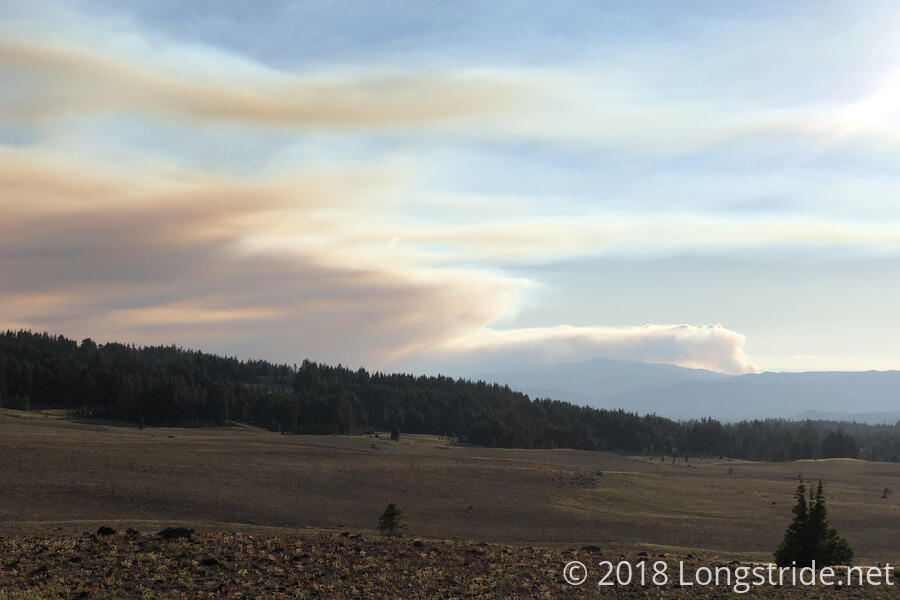 A Fire Near Crater Lake

Each year, the PCT suffers from wildfires somewhere along its length, and 2018 was no exception. A bad year for fires on the PCT, my timing allowed me to do well with fire detours. All together, I missed about 67 miles of the PCT as a result of four fire closures, but I was able to maintain a continuous footpath thanks to detours. More impactful than those closures, though, was that for about 800 miles, from Mount Shasta, CA all the way through Packwood, WA, the sky and views were frequently obscured by smoke from a multitude of fires both near and far from the trail.

For the 2018 season, the 2013 Mountain Fire closure on San Jacinto was slightly reduced, though not completely eliminated. Later in the season, that closure was lifted completely, only for another fire to temporarily close the trail again.

The Hendrix Fire, near the California-Oregon border was very nearly a problem for me, but I was fortunate to get to the closure area the day the closure lifted, saving a long detour with lots of elevation change. I gambled (successfully) that the detour wouldn’t be a problem for me, but I know several hikers within a day or two of me (in either direction) who skipped from Etna or Seiad Valley to Ashland because they didn’t want to take the detour.

My timing in northern California also put me ahead of a large fire near Redding, CA. Especially in this area, the air quality was notably lower than usual. I saw the occasional hiker with a mask (and quite a few people in Ashland with masks), but apart from hazy views and the smell of (a very large) campfire in the air, it wasn’t that bad for me.

Crater Lake was the only place on the trail I’d been to before, and I was quite looking forward to seeing it again, so the nearby fires made me somewhat nervous. Getting up to the rim and finding the crater so filled with smoke that Wizard Island was almost invisible was a bit of a let-down. Fortunately, a strong breeze blew over the next several hours, clearing the caldera and unveiling a great view.

As I reached Washington, three trail closures initially put a damper on the tail end of my hike. The first, the Miriam and Clear Fork fires in the Goat Rocks Wilderness, forced a short detour near Packwood. Part of this detour had the steepest trail I hiked on the PCT. The second, the Bannock Lakes detour near Holden and Stehekin, added roughly a day of hiking, and the rugged terrain on the detour got me to the bus stop into Stehekin just as the bus arrived.

The final detour in Washington was the Holman Fire, in the Pasayten Wilderness. When I first learned of it in Cascade Locks, OR, the fire was burning on the trail, and the resulting closure cut off access to the northern terminus. Later, a complicated detour emerged to a different border marker, though with no entry to Canada permitted. Eventually, a reduction in the size of the closure allowed for a detour that re-opened access to the northern terminus. Although no longer burning once I arrived in the area, thanks to rain and snow, the trail had been directly burned by the fire, and was still unsafe, mandating taking the detour. This took the trail away from a scenic high ridge and sent it down a neighboring valley with plenty of tree cover and no views. That detour also added about another day of hiking. 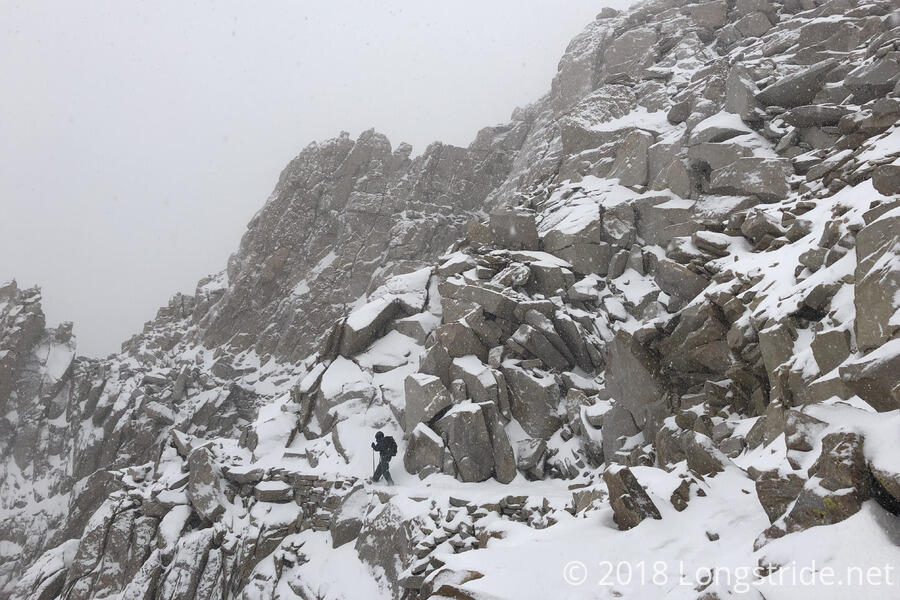 With my early-season start, I anticipated running into snow near Mts. San Jacinto and Baden-Powell in southern California, whose summits I wanted to visit. Accordingly, I carried microspikes with me through the whole southern desert. This wound up being entirely unnecessary, as while there was some snow near both of those peaks, it was not enough to actually warrant putting spikes on. (It was a case of it taking far longer to put the spikes on and take them off, than it would be to go slowly and be extra careful for a couple of hundred feet.) In retrospect, I could have sent my microspikes to Kennedy Meadows for the Sierra and have saved myself from carrying them for 700 miles.

Although a low-snow year, my relatively early entrance to the Sierra (leaving Kennedy Meadows on May 16, roughly a month earlier than is generally recommended) still left me with plenty of snow to deal with. I hiked through some measure of snow on a daily basis starting about a day south of Crabtree Meadows (generally used by PCT hikers as a base camp for Mount Whitney summit attempts), and ending at Donner Pass, a span of 39 days and roughly 375 miles. The bulk of the snow started just south of Forester Pass, and ended after Silver Pass, covering the seven highest passes in the Sierra.

For the most part, the snow was a nuisance, making hiking harder and slower, though it was nice, on occasion, to be able to cut some distance off the trail by glissading down a hill or cutting a direct line through the snow where the trail curved around or switchbacked up or down a hill.

The only time snow proved to be a significant hinderance for me was Mount Whitney. My first summit attempt was aborted about a mile and a half from the summit due to dangerous conditions from a snowstorm. We tried to summit again the next day, but the fresh snow from the day before, lightning, and a more exhausting hike on top of the prior day’s exhausting hike combined to thwart out second attempt. After that, we were too tired (and also too low on food) to make a third attempt.

Had I gotten to Crabtree Meadows a day earlier, or two days later, I’d have had no problem summiting. The weather was perfect the day I got there, and the day I left. Getting there when I did, though, allowed me to avoid hiking over Forester Pass the day after a snowstorm (which caused one group to turn back and exit the trail for resupply elsewhere), and allowed a second snowstorm to pass while I took a few days off in Bishop.

Between Forester Pass and Mammoth Lakes, all of the high passes were blanketed in snow, requiring the use of microspikes for safe hiking. I was lucky an ice axe wasn’t necessary; I didn’t have one and didn’t have experience with one.

After Donner Pass, I’d occasionally see snow near the trail, and hiked through a snowstorm briefly in Washington, but that was the last time snow posed any sort of obstacle.

Not being able to summit Mount Whitney was one of the few disappointments I had with my hike. Hopefully, I’ll make it back to Whitney at some point to make a third summit bid. Only time will tell…

This post contains links to amazon.com. As an Amazon Associate, I earn from qualifying purchases.
Pacific Crest Trail, 2018
« (The Mountains Were Calling, And I Was There) Previous Entry
Next Entry (What to Wear on the PCT) »